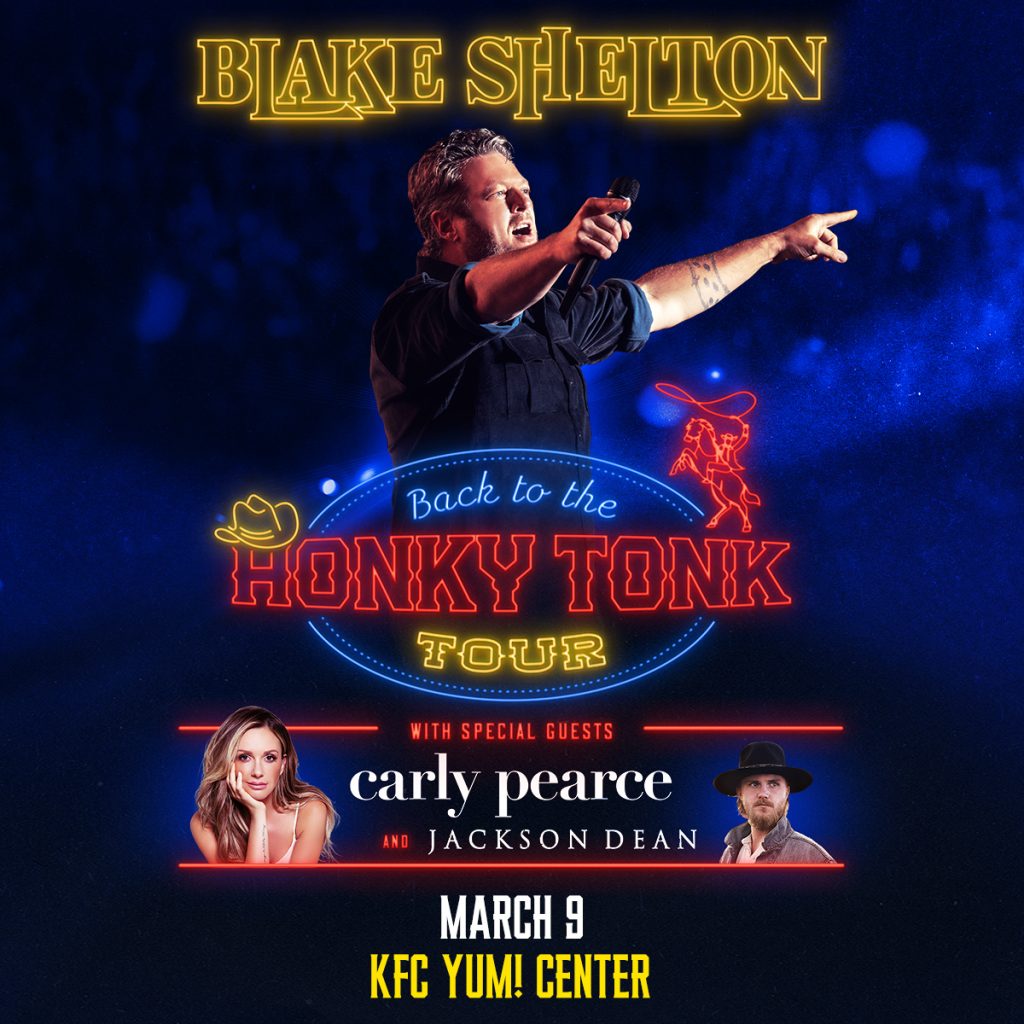 MORE INFORMATION:  Shelton has ranked among Pollstar’s Top 200 North American Tours nearly every year for the past decade. His Back to the Honky Tonk Tour follows consecutive Friends And Heroes outings, each of which earned widespread critical praise. The beloved recording artist is indeed going back to the honky tonk with his latest single “No Body,” which became the most added song at country radio upon impact earlier this year. The song is “soaked in ‘90s country vibes” (Billboard), and its official music video features line-dancing at a country bar – complete with Shelton sporting his signature mullet.

About Blake Shelton
Blake Shelton continues to add to his impressive resume of music with the release of his latest single “No Body.” The song comes on the heels of his album Body Language Deluxe, which features his Platinum-selling 28th country radio chart-topper, “Happy Anywhere” (featuring Gwen Stefani). Prior to “Happy Anywhere,” Shelton and Stefani celebrated a 2x Platinum, multi-week No. 1 with “Nobody But You,” which has now topped 480 million global streams. The single made its TV debut on the 62nd GRAMMY Awards, where Shelton was also nominated for Best Country Solo Performance for his hit “God’s Country.” The 4x Platinum smash earned the 2019 CMA Award and 2020 ACM Award for Single of the Year. As his award wins approach the hundreds, Shelton remains a force in the industry with ACM (5), AMA (3), CMA (10), CMT (11) and People’s Choice Awards (7), among many others.

As a coach for the Emmy Award-winning television show The Voice, Shelton is an eight- time champion. He and Carson Daly recently revealed that they would be teaming up to executive produce and star in a new celebrity game show, Barmageddon, to air on USA Network. The Grand Ole Opry member also remains focused on his Ole Red partnership with Ryman Hospitality, with locations currently in Tishomingo, Nashville, Gatlinburg and Orlando. A noted humanitarian, Shelton has helped raise millions of dollars for children’s hospitals, disaster relief organizations, food banks and more in his home state of Oklahoma and throughout the entire country. For more information, please visit www.BlakeShelton.com

About Carly Pearce
Fiercely rooted in the classics, the girl who left her Kentucky home and high school at 16 to take a job at Dollywood has grown into a woman who embraces the genre’s forward progression. Confident in what she wants to say, the committed songwriter has resonated with fans and caught the attention of music critics from Billboard, NPR, Rolling Stone, The New York Times touting 29: WRITTEN IN STONE (Big Machine Records) on their 2021 year-end Best of Lists. Carly performed the collection in its entirety throughout her sold-out THE 29 TOUR and is currently on Kenny Chesney’s HERE AND NOW TOUR 2022. Lighting a fire with her debut album EVERY LITTLE THING and the PLATINUM-certified history making title track, Carly’s 2X PLATINUM- certified “I Hope You’re Happy Now” with Lee Brice won both the CMA Musical Event and ACM Music Event, plus ACM Single of the Year. She picked up her second consecutive ACM Awards Music Event of the Year with Ashley McBryde duet “Never Wanted To Be That Girl,” Carly’s third No. 1 and the third duet between two solo women to top Country Airplay, dating to the Billboard chart’s January 1990 inception. Knowing it’s time to move on, she offers final reckoning of a relationship that failed and a new set of standards for the next time she falls in love with the project’s final single “What He Didn’t Do,” co-written alongside Ashley Gorley and Emily Shackleton. Recently filming “Carly Pearce Inside 29: Written In Stone – Live from Music City” with acclaimed director Shaun Silva at Nashville’s Marathon Music Works, her surprise duet with Wynonna Judd aired on ABC’s CMA Fest special and CARLY PEARCE: TWO NIGHTS AT THE RYMAN October 26 & 27 mark her first headline dates at the iconic venue. Returning to host ACM Honors on August 24, the reigning ACM/CMA Awards Female Artist/Vocalist of the Year and Grand Ole Opry member (fittingly invited by Dolly Parton) is clearly living out her childhood dream. For dates and more, visit carlypearce.com.

About Jackson Dean
Odenton, Maryland native Jackson Dean is a singer/songwriter known for his old school, gritty style of Country. Mature beyond his years, Jackson has a daring and carefree spirit, having moved out at 18 years old to live in a cinderblock, concrete floor, one-room shack on the back of his grandfather’s property with no heat and no plumbing. Bringing that same sense of adventure to his songwriting, Jackson writes both independently and alongside outliers like Luke Dick, classic writers like Casey Beathard and everyone in between. Following the release of his debut collection JACKSON DEAN, Jackson continues to show people how real music can be with atmospheric, musically forward album GREENBROKE out now via Big Machine Records. Featured on the soundtrack for Netflix’s The Ice Road and in an episode of Paramount Network’s Yellowstone, the stomping “Don’t Come Lookin’” is making its mark as his first single at Country radio. Following an early career of local performances in his hometown, Jackson has joined bills with superstar acts like Toby Keith, Miranda Lambert, Brantley Gilbert, Kane Brown, Jake Owen and Brothers Osborne. For the latest information, visit jacksondeanmusic.com.