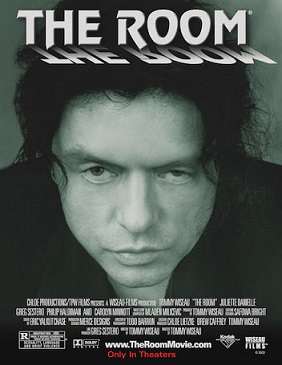 A black-and-white poster for the movie shows Tommy Wiseau's face looking directly at the viewer.

When what is possibly the worst movie ever made, “The Room,” was filmed, its famously clueless director Tommy Wiseau made the inexplicable decision to capture the so-bad-it’s-good masterpiece on both 35mm and digital film. This was, by most accounts, a bad idea, since it was nothing but an extra cost for production. But, if you’re a film purist, it’s nice to watch a movie the old fashioned way, even if it is a bad one. And Baxter Avenue Theatres is showing “The Room” (2003) on real, 35mm film at this midnight showing. Fans of the cult hit are encouraged to bring props, such as plastic spoons and footballs, to brandish when they’re seen on screen à la “The Rocky Horror Picture Show.” And for those who haven’t seen the movie, it’s best to go in having no idea what to expect. Just know that it truly is terrible, but that doesn’t mean it’s not worth watching.