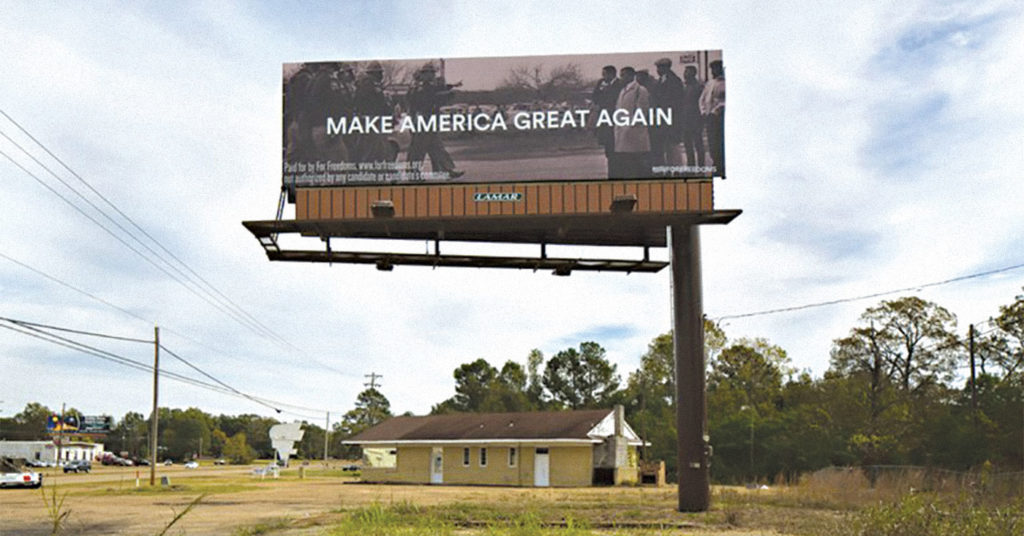 By For Freedoms. Billboard.

At first glance, the “Make America Great Again” billboard by For Freedoms is a sad reminder of our current administration and its followers. Stop — look again. The MAGA slogan is superimposed over the 1965 “Bloody Sunday” civil rights protest in Selma, Alabama. Now we’re talking. And that’s what For Freedoms, an artist collective super PAC, wants to do. They hope it will foster conversations about art, propaganda and politics. As part of their “New Monuments” series, the Hite Art Institute positioned the billboard in a campaign headquarters-styled gallery in the Cressman Center. The organization’s title For Freedoms is a play on President Franklin D. Roosevelt’s “Four Freedoms” (freedom of speech, freedom of worship, freedom from want and freedom from fear). It was founded by Hank Willis Thomas and Eric Gottesman two years ago, and has since included Elizabeth Baribeau, Michelle Woo, Taylor Brock, Emma Nuzzo and Evan Blaise Walsh. They have a network of over 140 additional artists as well as institutions to help them create their messages. For Freedoms cofounder Eric Gottesman will give an artist talk on March 22. The Hite will present a round table on the First Amendment on March 29. Both are 6-7:30 p.m. at the Cressman Center.