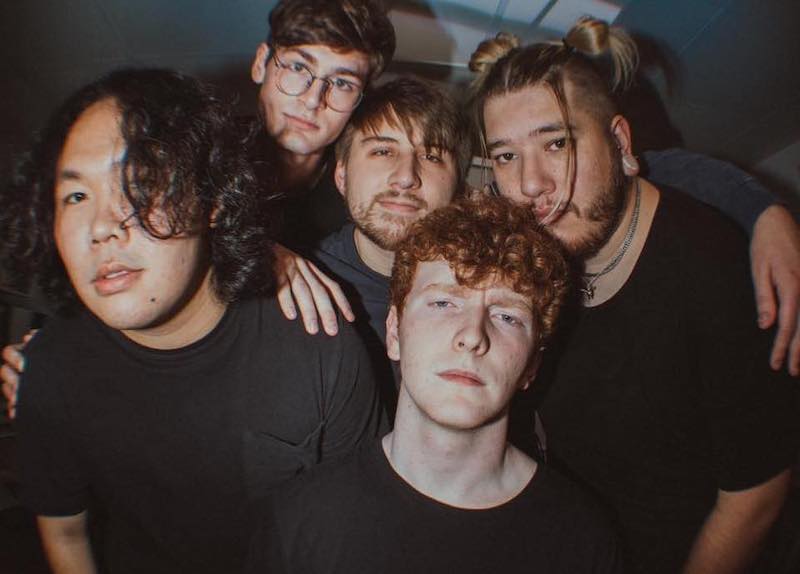 As teenagers, Adam Johnson, Devon O’Dell and Taylor Lin were a part of a metalcore band and they realized that the genre was not for them. It wasn’t until 2020 when the boys met Stefan Vaught and Chaz Crawford that the group finally found their sound in hyperpop. Since then, Stranger Club has been performing shows, making music videos and using each other’s musical backgrounds to make a unique statement in their newfound genre.

“It was a lot of trial and error. It wasn’t easy by any means,” Johnson—the lead vocalist for the band—told LEO, “but I think I think we’ve kind of finally in the past like 6-7 months have kind of nailed what our what direction we’re going in stylistically, as far as the music goes.”

Before Stranger Club, the band was called Refractions and drummer Stefan Vaught said that the guys got his attention about four years ago. He was in a punk band at the time when a friend invited him to a show at a small venue in Lexington for another band he knew, as well as Refractions.

Vaught said: “I had never heard of Refractions… and so I pull up to the show and like Refractions blew out of the water, in my opinion. But it’s just like ‘Yo. These teenagers, just like pulled up and just like murdered their set.’ I remember looking at my guitar player, that was with me at this time, and I was just like ‘Dude, I wish we were doing that.’”

Vaught followed their music ever since.

Two years later, Vaught said he and guitarist Chaz Crawford were in a band together recording at a studio in Lexington, and they met Refractions for the first time. The band was looking to swap in new members, and Vaught and Crawford were losing interest in their work together.

“It was fate,” Johnson said.

With over 19,000 monthly listeners on Spotify and over one million streams on their hit song “Tulips,” the new group changed their name to Stranger Club in 2020.

The band discovered an undeniable chemistry when they played together that helped them find their style in hyperpop, an emerging genre that takes elements from EDM and traditional pop. Vaught said that, even in hyperpop, the band is finding ways to stick out from mainstream pop music.

Their unique sound comes from each member having a different background in music and band culture. Johnson grew up in metal and punk, but also owes much of his vocal style to indie music from artists like Brakence. Bassist Devon O’Dell grew up listening to metal and rap, giving Stranger Club the groove you can hear throughout their records. He learned most of what he knows from artists like Hippo Campus and Chon. Vaught is what the band calls “the band dad” since he has experience in traveling with other bands as a session drummer for indie bands. He said his experience comes with versatility, which he’s used to make unique drum patterns that feed off of the rest of the band. The youngest member of Stranger Club, Crawford, comes from a “a little bit more chill” indie pop and indie folk background.

“It kind of lets me add some more spacey kind of textural elements to the music,” Crawford said.

Guitarist Taylor Lin comes from a metal and punk background like Johnson, giving Stranger Club their intricate guitar licks influenced by artists like Polyphia. The band credits him for writing their songs, as well as producing their sound.

Getting the band together can often be difficult. With Crawford at Middle Tennessee State University in Murfreesboro, TN, and O’Dell a senior at Code Louisville, Vaught said it’s hard to manage five different schedules constantly, especially when it comes to booking shows in the area.

“Which is kind of fine too though,” he said, “because it’s like we don’t want to overexpose ourselves into just starting our different cities, just with the fact that we’re not a major commercial band.”

This year, the band has a lot of plans for growth. They plan to travel to surrounding states like Tennessee, Ohio and Indiana. Johnson said they just finished a music video for their new song “Outfit,” and the song will be released in a few weeks. Their latest single “Fasten” is out and available on all music streaming platforms.