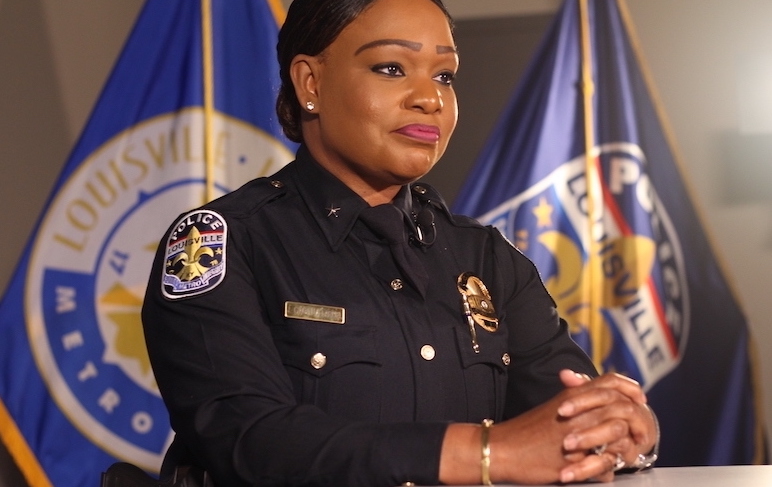 Jacquelyn Gwinn-Villaroel has taken over as the interim chief of the LMPD.Photo by Scott Recker.

Gwinn-Villaroel has inherited a short-staffed department that is still awaiting the results of a Department of Justice investigation that was launched in the wake of the 2020 police killing of Breonna Taylor.

In her second week as chief, Gwinn-Villaroel has been sitting down with different media outlets in the city, including LEO Weekly.

Here are some takeaways from LEO’s conversation with her earlier this week.

THE DOJ INVESTIGATION INTO LMPD

While former Chief Erika Shields and former Mayor Greg Fischer said in September that they expected to receive the findings of the wide-ranging Department of Justice probe into LMPD within “the coming weeks,” Interim Chief Gwinn-Villaroel told LEO on Tuesday that there is no timeline on when that report will come in.

The DOJ launched its patterns or practice investigation into LMPD in April 2021 following the police killing of Breonna Taylor and months of protests in Louisville. Among the subjects of the investigation are whether the police force “engages in a pattern or practice of using unreasonable force” and “whether LMPD engages in unconstitutional stops, searches, and seizures,” as well as whether the department unlawfully executes search warrants on private homes, the DOJ said at the time.

The probe is expected to eventually result in a federal consent decree, an agreement between the city and the federal government to fix practices identified as flawed by the DOJ. In anticipation of a consent decree, LMPD under Chief Shields began instituting reforms and Gwinn-Villaroel says she is continuing on that path.

“Our posture is just to continue to operate at a standard of excellence,” she said during the interview with LEO. “Even when the DOJ findings come out or if we’re underneath a consent decree, again, our vision and our mission is to truly continue aggressively making those needed changes that need to be made within the department and serve the community in a better way.”

In an interview with KET last month, former Chief Shields said she expected the report to be “scathing.”

Gwinn-Villaroel told LEO she expects the report to be “strong.”

“They’re going to be looking at five to eight years of information and data. And they’re actually going to uncover whether or not there was  some bad, flawed, patterns and practices there,” she said. “So the report will be strong….we’re going to be prepared for that.”

When the DOJ findings eventually come in, Gwinn-Villaroel said, the department will have “open forums with our officers to actually go over the report and to let them know exactly what this means.”

Speaking to LEO Weekly last June, Inspector General Edward Harness said that on ride-alongs with LMPD officers, he was surprised that some officers were not aware that their department was under DOJ investigation.

LMPD has seen case after case of officer misconduct in recent years. And at times, misconduct occurred in front of other officers who did nothing to stop it.

Take, for instance, Slushygate, in which at least two LMPD officers threw drinks at civilians from unmarked police vehicles while filming their exploits to share with other members of their unit.

And after the police killing of Breonna Taylor, the Department of Justice says officers had a meeting in a garage to concoct a story about false information on the warrant and mislead investigators.

Gwinn-Villaroel says LMPD is encouraging officers to intervene when they see misconduct by others on the force.

“It concerns me where I have one officer involved in any kind of misconduct. So whether it’s one or a group, that is a concern. But nonetheless, that’s why we are so adamant about officers intervening when they see acts of misconduct,” she said. “That’s why we are encouraging our officers to speak up when they’re seeing a fellow officer going down a path that is negative and does not reflect the missions and the goals of this agency and actually tarnishes their oath of office.”

A recent focus on intervention has also been a theme in some LMPD training materials seen by LEO. Asked what the catalyst for that focus on intervention was, Gwinn-Villaroel said: “At the end of the day, on the heels of George Floyd, we needed to actually recognize that, in that incident, you had some officers that could have intervened in that scenario. So again, making sure that we’re reinforcing that you have a duty, you have a duty to stop bad behavior.”

“Our lesson plans — they’re outdated. They’ve got stuff in it that I’m embarrassed by. Somebody has to audit these lesson plans and professionalize them. And I will submit to you that it shouldn’t be a cop,” she said.

She did not mention any specific courses at that time, but as LEO Weekly previously reported, LMPD training materials included a slide that portrayed police as avengers tasked with carrying out God’s wrath as well as a course that aimed to have students be able to “identify aspects of Hispanic/Latino culture that may pose hazards to law enforcement.”

Speaking with LEO Weekly this week, Gwinn-Villaroel said that civilian oversight on training is in place, with a civilian academic director hired to lead the training academy alongside a sworn LMPD major. Additionally, she said, they have embedded civilian curriculum writers in the training academy.

“With those layers involved, we’re seeing a difference in our training material and the overview and what we’re putting out there,” she said. “But again, we, as a department, must stay above the curve as far as what we’re training. Seeing the trends and developing that curriculum that our officers need for right now in this policing era.”

She said she refers to the civilians at the training academy as the “professional staff” and that officers have embraced the change.

“This is a new way of doing things. And it’s the progressive way. So they embraced it,” she said.

The department has put up billboards in other cities, offered lucrative signing bonuses and even turned to TikTok videos matched with trending sounds to try to boost recruitment.

Recently, the department has also started flying out potential applicants and putting them up in hotels while they visit Louisville, go on ride-alongs and take an entrance test.

“We want to make sure our marketing is broad, right, and making sure that we’re really robust in that area. But what can we do to actually help streamline the process? Because we want quality candidates — and as you know, within the nation, everybody is looking for officers,” said Gwinn-Villaroel. “So we need to make sure that our process is robust but also streamlined, so we’re able to get those officers in. So whatever adjustments we need to make to do on-site testing, to provide that physical test, that written test. Whatever is needed so then we can shore-up that process, so we can keep the process moving.”

Between Oct. 16 and Dec. 5 of last year, LMPD flew out six potential recruits, according to Matt Sanders, a public information officer with the department. Of those six, he said, five are in the hiring process.