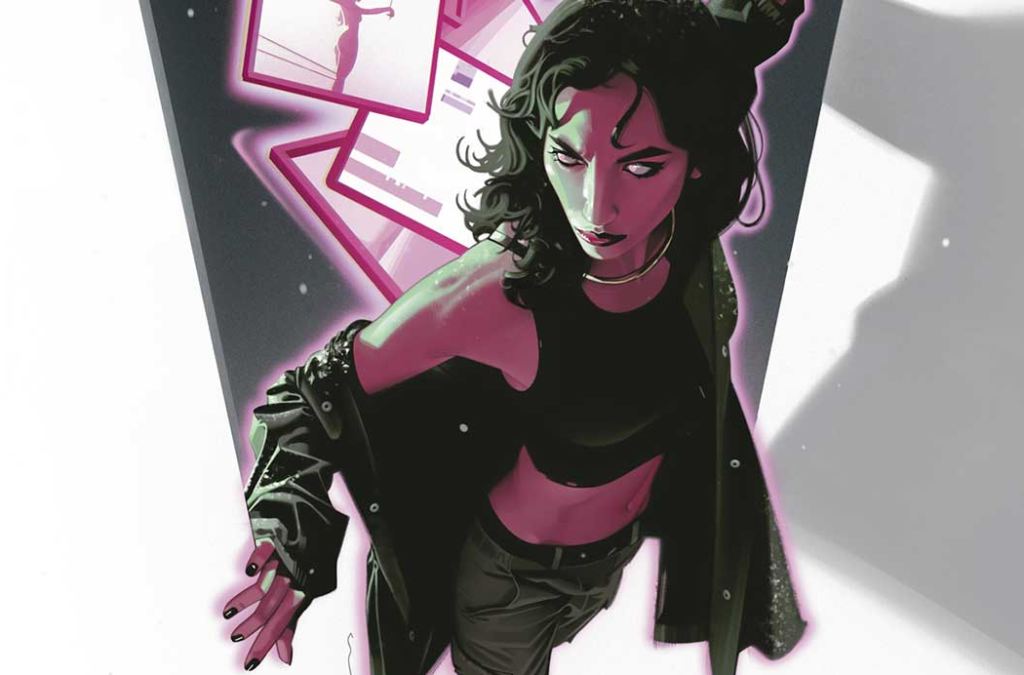 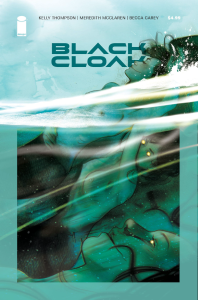 From the outside the city of Kiros, the last known city following a devastating war, doesn’t look too shabby. Located along the slopes of a mountain peak and split by a gorgeous waterfall, it looks rather pleasant. However the streets are rampant with assholes trying to find something to kill. This is where our protagonist comes in.

“Black Cloak” #1 introduces us to Phaedra, a detective (the titular Black Cloaks) working murder cases in Kiros. She’s also a stoic, exiled royal with seemingly many, many layers of yet-discovered problems. Her life goes awry when her ex-fiance (and heir to the throne), an elf, and a mermaid are all found murdered in a single day and she’s suddenly thrust back into the world that rejected her while balancing multiple investigations.

Just about the easiest way to reel me into a story is having a queer main character and putting a spin on the noir detective genre. In the case of “Black Cloak,” it’s like if Philip Marlow wore a cloak instead of a fedora, lived in a bright colorful world rife with conflict, and carried around lots of holographic gadgets. The world is lush and fantastical, and the author does an excellent job of introducing us to it without lore dumping. If that sounds like a blast, and you’re also a fan of “Arcane” or “Saga,” highly recommend grabbing it off the stands. 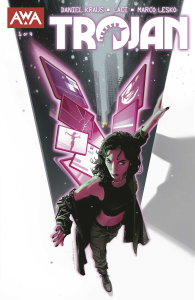 written by Daniel Kraus
art by Laci
“Once upon a time, we lived alongside Legends. Creatures of Myth. Centaurs, fauns, gorgons, kelpies, gnomes, and more. They were spectacular.  Majestic.  Powerful.  Peaceful. Pure. In comparison, we were ugly. Weak. Warmongering. Rotten. Is it any wonder we could not live alongside them any longer.” That is the opening lines of “Trojan” #1.
I had no idea when I picked it up that the book wasn’t about ancient people and their wars. Instead, it’s a post apocalyptic piece in which humans hunt down, torture and kill magical beings, live online. And you can watch, for a price, of course.
Nessa is a seemingly innocent girl, visiting the unsavory part of town. She witnesses an old man set upon by some nasty characters. When she tries to help, she’s stopped by a young man trying to keep her from being their next victim. As they watch, the old man’s hat falls off, revealing a set of horns. Once they realize he’s fey, they step up the violence. Terrified, the young man keeps Nessa from intervening and pulls her away. Nessa isn’t what she seems, though. She tells him she needs a tour guide of this ugly place, that she wants to be a client. She knows that he, too, isn’t exactly who he appears to be. She has to threaten him, but eventually he takes her to his home where he makes a living helping people navigate the dark places on the internet. Nessa wants to track down and stop the killing of the Legendary Creatures and she needs the help of the young man.
Both these characters are hiding something from the other. One is revealed in the end, but the other, I’m still not sure about. “Trojan” #1 was a great read, and I can’t wait for issue #2 of this mysterious, sometimes grotesque story.