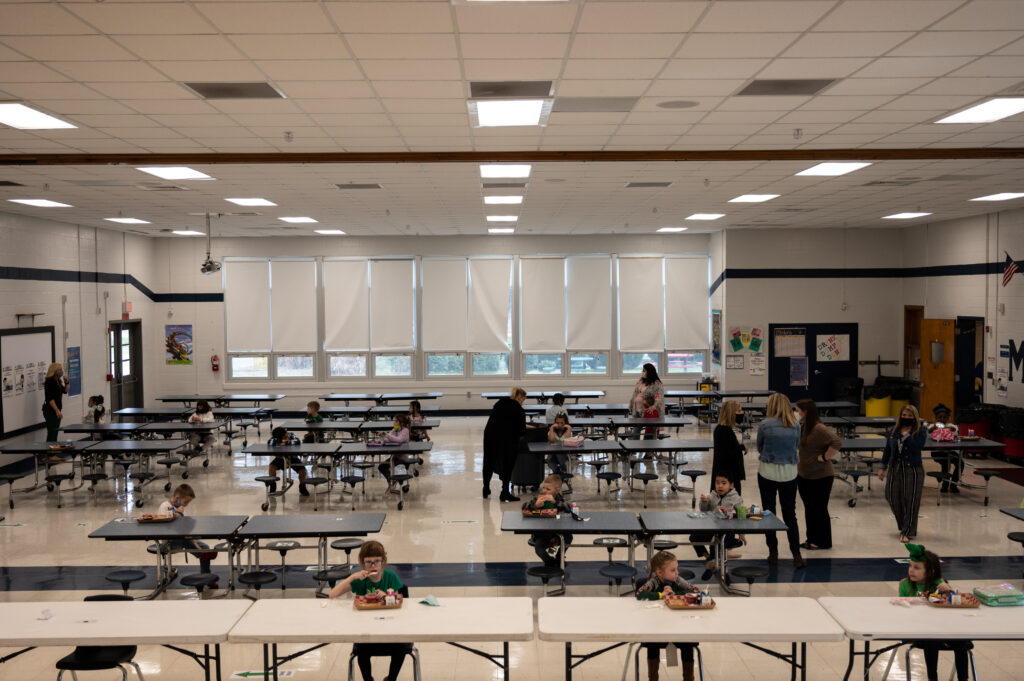 Teachers gather and speak as students eat at socially distanced tables in the cafeteria of Medora Elementary School on March 17, 2021 in Louisville, Kentucky. Today marks the reopening of Jefferson County Public Schools for in-person learning with new COVID-19 procedures in place.Photo provided by Kentucky Lantern.

A new study on how Kentucky’s youth have coped with COVID-19 reports mental health challenges, negative views toward remote learning and more.

The report was published Wednesday by the Kentucky Student Voice Team, which is a youth-led nonprofit with a goal of creating “more just, democratic Kentucky schools and communities as research, policy & advocacy partners.”

Researchers interviewed 50 Kentuckians as well as conducted a survey for the study. It was analyzed by the Student Voice Team and University of Kentucky researchers.

They found that many students felt “heavily negative” about online learning. Students felt like their opinions did not matter enough to administrators. Youth experienced strained mental health during the pandemic. Finally, many reported they struggled with loss of social interactions and milestones.

They described “shock and grief at the loss of the social aspects of learning,” which ranged from jokes in a group project to prom. And, students praised their teachers for helping them cope.

Still, challenges brought on by the pandemic were relentless.

One student told interviewers that they felt like in Zoom classes the lack of requirement that cameras be on was a “barrier” to learning. Another said they needed better instruction and didn’t get much out of watching videos.

Students who participated in this study expressed “almost universal frustration” with administrators, who they said made them feel like their opinions did not matter when they were difficult to reach.

One student described contradicting guidance on masking in schools from the principal and superintendent.

“It was just very messy and everyone chose sides and it affected our education,” that student said, according to the study.

Students described mental health fallout, too, from studying in the same place they slept. That caused at least one student to form an obsession with school. It was the one thing they could control, they told researchers.

“I would spend just hours at a time without going to the restroom or eating or anything, just working on schoolwork. And it was really unhealthy. And so that wasn’t necessarily just because of COVID. But I think it definitely did enable me to feed into those bad habits a lot more,” that student said.

The Centers for Disease Control and Prevention reported last March that 37% of high school students reported poor mental health in 2021. Additionally, 44% “reported they persistently felt sad or hopeless during the past year.” The National Suicide Prevention and Crisis Lifeline is 988 – and anyone can call or text it for mental health help.

“Students almost felt ‘stranded’ in a sense where online schooling was not set up in a comprehensive way meant to stimulate learning,” said researcher Esha Bajwa. “Instead, it was mostly an afterthought to sending people home with many feeling that there was no real way of feeling connected and/or engaged with school.”

Researchers outlined these policy and practice recommendations for the future:

Part I came out in Spring 2020 and found, among other things, that students felt the meaningfulness and manageability of their schoolwork declined during the first semester of pandemic-induced remote learning.