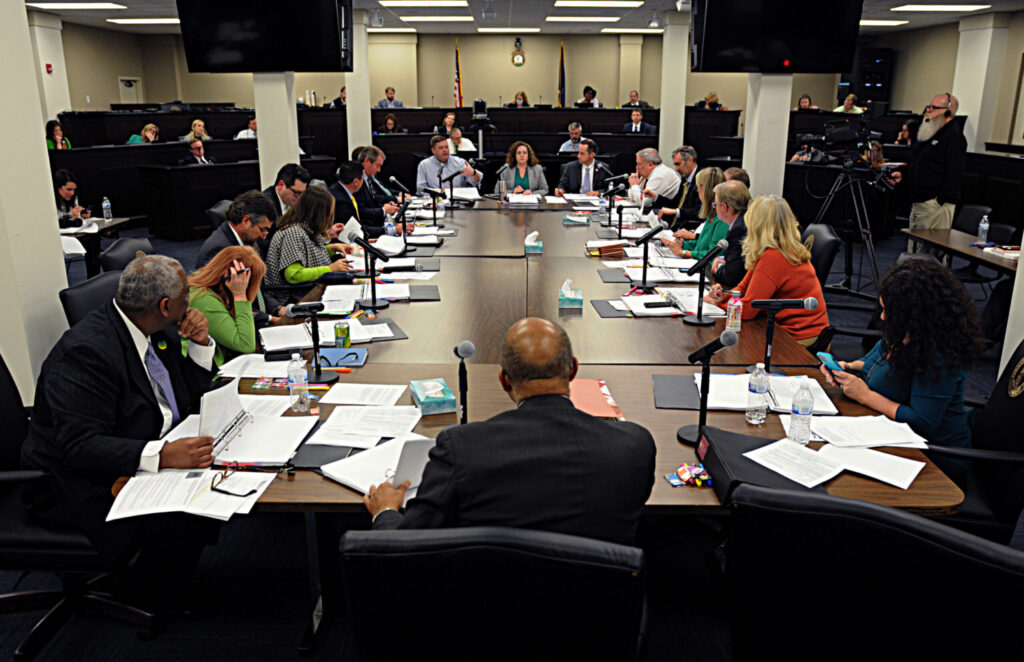 Members of the Budget Conference Committee meet in the Capitol Annex.Photo provided by the Kentucky Lantern

Most state lawmakers will be getting an 8% pay raise in 2023 and a boost in other expenses. They voted for the pay hike last year for themselves and most state workers but not for teachers.

That does not go over well with the Kentucky Education Association and KY 120 United, an advocacy group for public education that is partnering with the American Federation of Teachers, a national teachers’ union.

The two groups favor mandated across-the board raises for school employees, claiming it prevents inequity in pay across the state.

It instead decided to increase state money to school districts from $4,000 a student to $4,100 a student in the first year of the two-year budget and $4,200 in the second year and let each school district decide whether to boost teachers’ pay.

Some, like the Kentucky School Boards Association, argue that it is better for the legislature to provide more money to school districts and then let school boards determine how much pay raise, if any, teachers should get.

The Kentucky School Boards Association last year surveyed school districts about teacher raises. It asked: “Did your school board approve an across-the-board employee raise for the 2022-23 school year (that was separate and in addition to step increases; and no matter if it was called a cost of living/COLA increase; raise; etc.)? Step increases are built into a district’s budget to reflect education level and experience.

The survey showed 95 percent of the 171 school districts answered, “Yes.”

About 37 percent gave all employees the same percent raise as the preceding year, while about 58 percent adopted more complex compensation packages such as additional raises for targeted employees, alternating increases for certified (staff that must have a certificate to work like teachers, counselors, librarians and principals) and classified (staff that does not need certification like cooks, janitors and bus drivers) or increases determined by years of service.

The survey showed only 24 of the state’s 171 school districts provided at least 5% pay raises for this school year – what Beshear sought.

During his State of the Commonwealth Address, Beshear again asked this year’s state law-making session to provide a 5% raise for public educators.

The governor said the raise was needed to address the 11,000 teacher vacancies across the state.

But Senate President Robert Stivers, R-Manchester, told KET after the governor’s speech that it is not time “to do one-off budget things” when the legislature next year is expected to make huge contributions to state pensions. He added that Beshear has not called legislative leaders about a pay raise for teachers.

Nema Brewer, a Kentucky AFT organizer and a retired community relations specialist in the Fayette County Public Schools system, said this week  that she does not begrudge pay raises for state workers.

“But I have a problem with a hefty 8% pay raise and allowances and other expenses when you are working a part-time job and making more money than a first-year teacher,” she said.

According to the Legislative Research Commission, the pay for most Kentucky legislators will jump this new year from $188.22 a day to $203.28 a

The raise will apply only to legislators who began a new term on Jan. 1. That includes all 100 House members and the 19 of the 39 Senate members who won elections last November.

Any legislator who is not beginning a new term this year will be compensated under the old pay rates. This rule, however, does not apply to expenses.

The legislation last year that provided the pay changes — House Bill 243 — dropped the so-called “stationery allowance” for legislators to provide written correspondence with constituents. The “stationery allowance’ was $250 for House members and $500 for Senate members.

But lawmakers replaced that with an “allowance” now at the rate of $350 for House members and $650 for Senate members. The allowance is designed to help them communicate with constituents. That is a 30 percent increase for senators and 40 percent for representatives.

Another paid expense for legislators is mileage.

They are paid the federal reimbursement rate for each mile they drive from home to reach the Capitol, limited to one round-trip per week. That rate is now 65.5 cents up a mile, up from 57.5 cents in last year’s legislative session.

The overall price tag for this year’s legislative session is estimated to be $4.256 million, with most of that taken up in salaries.

The first four days of the session, traditionally for organizational purposes, ended Jan. 6. The 2023 regular session starts up again Feb. 7 and runs though March 30.

Lawmakers receive no salary between the two parts of the session. During the second session, lawmakers will get paid for every day from Feb. 7 to March 30, including weekends and holidays.

That amounts to 56 pay days for lawmakers in the 2023 session, for which a rank-and-file legislator can expect to receive $21,055  in salary and expenses.

Kentucky’s lawmakers are not overpaid compared with those in other states, although direct comparisons are difficult because of  significant variance among the 50 states, according to a survey last year by the National Conference of State Legislatures.

The average pay for a state legislator in the United States is about $37,000 a year. California legislators, who meet year-round, are the highest paid at $114,877 a year.

All of the top five highest-paid legislatures are full-time. Kentucky legislators are scheduled to meet for 30 days in odd-numbered years and for 60 days in even-numbered years.