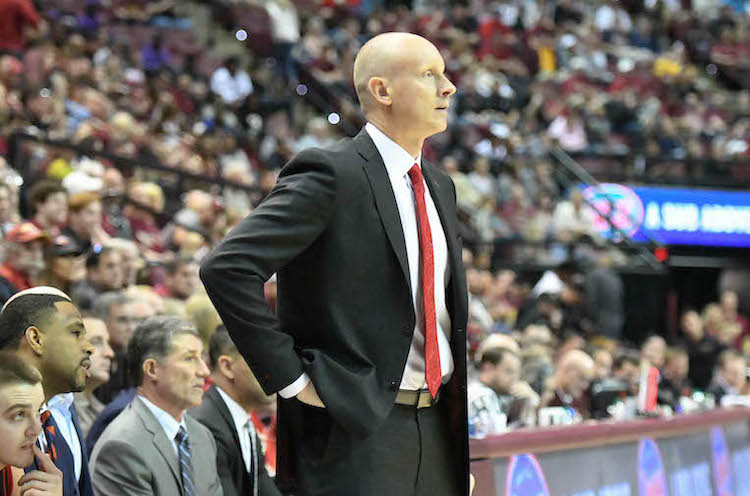 Louisville head coach Chris Mack in the first half of FSU's game against Louisville at the Tucker Center on February 9, 2019.Photo by Jacob Gralton, republished under Creative Commons.

Chris Mack called the allegations “trivial,” and in the end his judges agreed.

An Independent Accountability Review Process panel considered the case against the former University of Louisville basketball coach and concluded any violations committed on his watch were “isolated and inadvertent,” and provided the Cardinals no more than a minimal recruiting or competitive advantage.

In short, no big deal.

In reality, though, Mack’s vindication was of little value. It arrived on Nov. 3, 2022, five days short of the one-year anniversary of the start of the six-game suspension the university imposed on its highest-paid employee, and more than nine months after a negotiated settlement brought an abrupt end to Mack’s U of L tenure.

Recently obtained transcripts and summaries of interviews conducted in the NCAA’s investigation of U of L basketball show how close Mack came to avoiding the whole mess. If not for Mack’s decision to record the extortionate exit rant of fired assistant coach Dino Gaudio, who threatened to expose rules violations in the program unless he was paid another 17 months’ salary, those compliance issues may not have come to light.

In an interview that was summarized but neither recorded nor transcribed, Herring said she remarked on the appearance of rules-breaking to U of L women’s basketball coach Jeff Walz. Gaudio said Walz warned him, “You better tell them across the hall they better be careful,” during a 33-minute phone conversation on June 30, 2020.

Yet Walz said Herring never approached him about inappropriate men’s workouts and denied discussing the matter with Gaudio during his interview with investigators. He became so annoyed with their line of questioning that he referred to himself as a “hostile witness.”

“Christine stopped in to see me in the weight room and may have said, ‘Who are these people?’ and I said, ‘I don’t know,’ ” Walz said. “I honestly — they (men’s basketball) have so many people compared to me, which could be a Title IX thing. But all I know is like — I don’t know who’s a player and who’s not. I mean, that’s the honest answer that I can give you. They got walk-ons, they got guys and I’m like I don’t know who’s who. So no. All Christine said, possibly, was ‘Who are these people?’ I said, ‘Christine, I don’t know.’ ”

Gaudio said when he raised compliance concerns, Mack would respond, “Hey, I got it.” According to the summary of Gaudio’s interview with investigators, “he now realizes that he should have gone to Compliance in some instances.”

The IARP panel found that graduate student managers and non-coaching members of Louisville’s men’s basketball program “actively and consistently participated in impermissible on-court activities” and that members of the basketball staff produced and showed impermissible recruiting videos to prospects, but decided those infractions did not rise to the level of violations warranting punishment.

When asked if the U of L staff viewed these activities as advantageous but not egregious, Gaudio replied, “Actions speak louder than words.”

That some of those actions evidently escaped the scrutiny of U of L’s then athletic director Vince Tyra, the university’s compliance office and the NCAA speaks to a pervasive culture of silence in college athletics. Coaches have little incentive to report those potential violations that could lead to recruiting limitations, post-season bans and/or unemployment.

Indeed, all three of the Mack-era NCAA allegations against U of L arose from Gaudio’s post-firing rant and might have remained secret had Mack not recorded his former assistant’s attempt at extortion.

“He lost his mind,” Mack told investigators. “You know, he became insane, crazy. You know, his eyes bugged out and he said, ‘You stay right there. You stay right there.’ And he stormed out of my office. And he was probably gone two or three minutes and in that time I just knew something was going to happen by his look. So I tried to grab my phone and figure out, you know, how to tape record.”

Mack told Gaudio he would pay him out of his own pocket while seeking assurances about what he might say, but he then edited the recording before sharing it with university officials, deleting parts he thought potentially incriminating.

“I felt like I was, you know, a baby and I don’t – didn’t like the way I sounded,” Mack told investigators. “You know, I didn’t want people to think that, you know, I was implicating myself. I had like no intention of paying Dino, but I didn’t know what the law was and I was nervous. I had never been in (that) type of situation before and handled it, you know, very poorly.”

John Carns, U of L’s senior associate athletic director for compliance, recalled hearing the recording for the first time at a meeting that night at Tyra’s house with Mack, future athletic director Josh Heird and Amy Shoemaker. The FBI would later download a longer version of Mack’s exchange with Gaudio that contained more incriminating dialogue and effectively forced U of L to discipline its head coach.

“It’s not the reporting,” Mack replied. “It’s just being a — you know, a guy that doesn’t talk bad about our program, you know? And now, again, rules have so much, you know, dark cloud history that, you know, we’ve really tried to do things the right way and, you know, we didn’t need any more backwards steps. You know, so what assurance did I have that you’re not going to, you know, come out of here and say, you know, ‘Louisville doesn’t know what they’re doing, you’re, they’re letting me go and that still happened.’”

Gaudio was charged with felony extortion for his trouble. Mack never really recovered from the season-opening six-game suspension imposed by U of L and would agree to a $4.8 million buyout with more than three years remaining on his contract.

It’s conceivable, perhaps likely, that Mack could still be the Cardinals’ coach had he not recorded Gaudio’s rant. Infractions that turned out to be “trivial” might easily have stayed a secret.