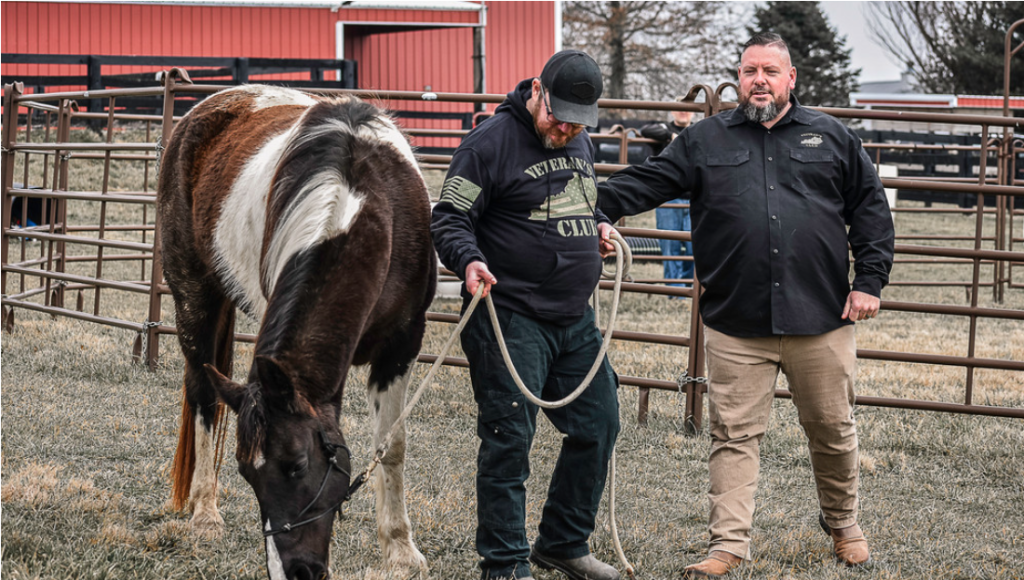 Kentucky Army combat veteran Jeremy Harrell (right) founded Veteran’s Club, based in the Louisville area, and advocates for mental health through a variety of organizations. Among other programs, The Veteran’s Club runs an Equine Facilitated Mentoring program to help veterans with PTSD and traumatic brain injuries. Pictured: Harrell with Don Hoy, USMC veteran.Photo provided by the Kentucky Lantern.

This story discusses suicide. If you or someone you know is contemplating suicide, please call or text the National Suicide Prevention Lifeline at 988. Veterans and service members calling 988 can press 1 for specific crisis help from the Veterans Crisis Line.

Once a veteran has decided to take their own life, “every minute counts,” said Kentucky Army combat veteran Jeremy Harrell.

That’s why he believes a new federal policy aimed at decreasing veteran suicides through free emergency mental health care will be “an actual lifesaver” for the state, which is home to about 370,000 veterans. It’s unclear how many of those aren’t enrolled in the VA health care system. Up to 9 million could benefit nationwide.

Eligibility requirements dictate a person can enroll in VA health care if they served 24 continuous months or their entire active duty stretch. Exceptions to that include for those discharged because active duty caused or worsened a disability and those who served before Sept.  7, 1980. Those requirements can sometimes keep people from getting the care they need, Harrell said.

The new federal policy went into effect on Jan. 17. Through it, veterans – both those enrolled in the VA system and those who are not – can go to any health care facility – VA and non-VA – to get free emergency mental health care in the case of a suicide crisis.

That free emergency care care includes 30 days of inpatient or residential care and outpatient care for up to 90 days, according to the United States Department of Veteran Affairs.

“This is a really, really big step in the right direction when it comes to veteran suicide,” said Harrell, who founded Veteran’s Club, based in the Louisville area, and advocates for mental health through a variety of organizations.

The new access also makes his job as an advocate easier, he said. He always recommends the suicide prevention lifeline, 988, to folks who call him in crisis. But in the past he also had to ask a series of eligibility questions to find out how to help the person. That takes up precious time.

“The clock is ticking,” Harrell said. “What we know is that when a person makes the decision, particularly in the veteran community, to take their own life … every minute counts.”

Now, help is simpler. Call or text 988. Or, he said, “find your way to the nearest emergency room.”

“It’s heartbreaking to know,” he said, “how many lives that we may have lost because of the bureaucracy.”

Eligibility criteria for this program are, according to the VA:

Are there enough mental health professionals in Kentucky?

That’s “very much a concern” for Harrell, he said, pointing to pandemic-induced burnout as a culprit and the need for more social workers.

Private entities also need to be trained in military lingo so they can best communicate with veterans who come in, he said.

But for now: “My hope is that, if nothing else, (hospital staff) can help stabilize the individual, putting eyes on the individual, and at least try to support them, because that’s a big part of it.”