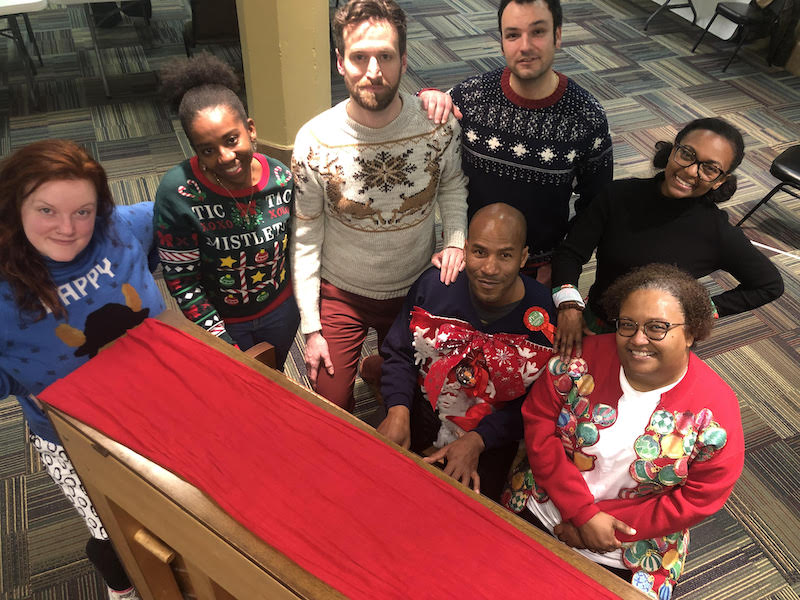 The cast of Dot.Photo provided.

For Michael Drury, producing artistic director of Pandora Productions, reflection always seems inextricably linked to action. I suppose that’s the essence of an actor’s work and one of the reasons theatrical storytelling endures as such a powerful, universal, provocative form of storytelling.

In a 2015 interview, Drury told LEO about the company’s early history, including a seminal meeting in 2003 when he and a group of confidants gathered around a table and set out on a mission-driven course that in the years since has profoundly affected the region’s culture.

Then and now, the company’s central mission has focused on telling stories with an LGBTQ+ focus — stories so universal that they pretty much are the definition of and to invoke a buzzword, intersectionality.

The sense of mission that grew out of that 2003 meeting has produced an extraordinary body of quality work. And like many other fiercely determined theater companies in Louisville and around the world, Pandora persisted through the pandemic by experimenting successfully in reaching audiences through alternative production platforms — in Pandora’s case, streams of productions staged in rigorously safe conditions. One of those productions was Colman Domingo’s autobiographical “A Boy and His Soul,” featuring a great performance by Tony Smith as the young artist coming out and discovering his identity.

Now the company is back with another play by Domingo — whose list of credits as a writer, actor, and director fills up several Wikipedia screens and range from Broadway (“The Scottsboro Boys;” “Chicago”) to film (Steven Spielberg’s “Lincoln”) to AMC’s “Fear the Walking Dead,” to the Netflix production of August Wilson’s “Ma Rainey’s Black Bottom.”  The current Pandora production – running through this weekend — is a revival of “Dot,” which premiered at Actors Theatre of Louisville’s 2015 Humana Festival of New American Plays. The current production (which I haven’t had a chance to see) is directed by Alonzo Ramont and features August Anderson, Jacob Cooper, Elias Feghaly, Immanuel Guest, Sage Martin, Kymberly Vaughn, and Sepricia White.

When I asked whether he had a special affinity for Domingo’s work, he said, “Colman Domingo has a voice that we’ve not heard on our stage before ‘A Boy and His Soul.’ His craftsmanship is really compelling. He weaves an interesting narrative, and the payoff is always worth it. We always focus on making great theater, and these plays do that.”

But what happens on stage and in the audience is always affected by what’s happening in the world outside the theatre, and in our conversation it was clear that Drury and company have also been reflecting deeply about how the conjunction of the pandemic and the largest most powerful mobilization of citizen outrage around racist violence in this country since the ‘60s can be addressed by companies like Pandora.

“We haven’t been slackers when it comes to diversity,” said Drury. “And for many of our younger years as a company, we just believed that we were diverse by our very nature because we’ve been doing LGBTQ-themed art, that other companies only do occasionally. That’s our mission. That’s all we do. But the world has changed — we can get married now, for example. And we need to change with it.”

For Drury, that means telling stories that the company hasn’t yet addressed. “I’m very interested in telling the Hispanic gay story, the Black gay story, and exploring all the intersections of LGBTQ and BIPOC. For example, we don’t have it on the agenda yet, but I’m really interested in finding a way to explore the Two-Spirit ideas around gender in Native American cultures. In those cultures, people of Two-Spirits were revered, which is quite the opposite of attitudes toward LGBTQ people have historically been treated in mainstream culture. I think there are interesting stories to be told there.”

As Drury sees it, the way forward for Pandora is multi-faceted. On stage, he says, the company is working to build a more diverse casting and backstage pool, and to grow the company’s directing pool (he is only directing two plays during this season).

Programming itself, said Drury, is essential in enriching the pool of creatives and audiences. But another essential step, he said, is usually invisible to the audience: diversifying the boardroom. “We really need to have those voices in the boardroom. It’s a challenge that we’ve been working on for years.”

Recruiting and engaging board members is always a challenge, noted Drury. And he described it as a circular process – having a diverse board enriches a theatre’s connections to multiple communities, and one key to igniting the interest of potential board members is to light the fire with diverse programming.

After twenty years under Drury’s leadership, it looks like Pandora Productions is well-positioned to become even more reflective of the communities it strive to serve. •