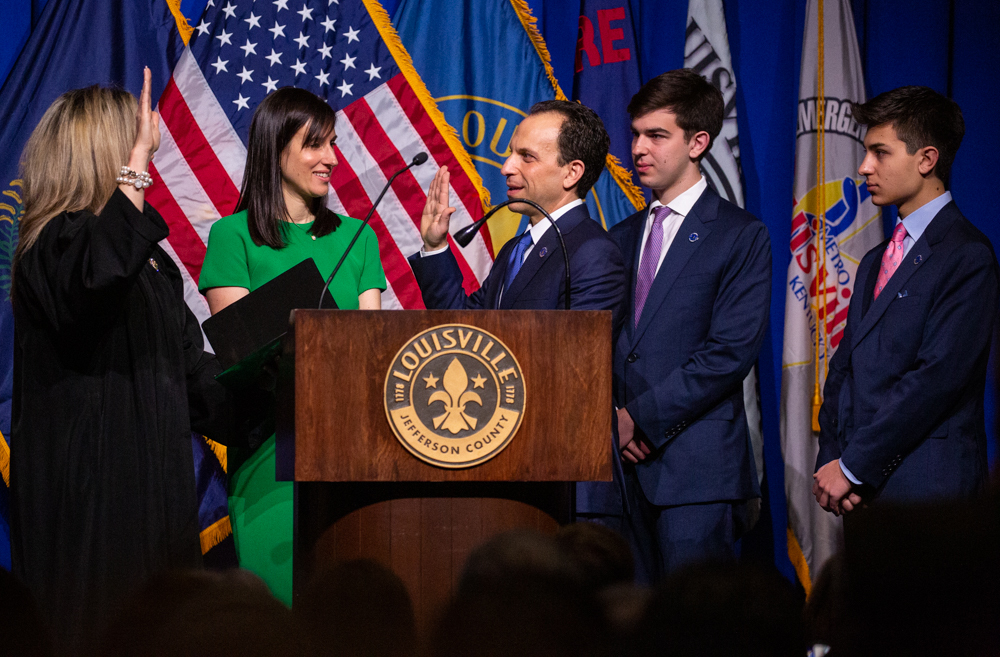 “Part of my job as mayor is holding others accountable. And I expect every one of you here today and everyone in the city of Louisville to hold me accountable,” he said in his inauguration speech at downtown Louisville’s Metro Hall during an invitation-only ceremony in the building’s rotunda.

Greenberg, 49, inherits a city still reeling from the shattered relationship between many citizens and city government following the police killing of Breonna Taylor nearly three years ago. Following the killing of Taylor and months of protests, the Louisville Metro Police Department became the target of a wide-ranging Department of Justice probe that is expected to ultimately result in a consent decree.

Calling public safety his administration’s “first and highest priority,” the former 21c Museum Hotels CEO said the city has to make the LMPD “the best police department in America” by putting officers in a position where they can succeed.

But making Louisville safer, he added, involves more than the police.

“Becoming a safer and more just city is essential to everything we do. And let me be clear: improving public safety is about much more than policing. It’s also about preventing as many crimes as possible through outreach, investment, communication, building trust, community violence intervention strategies, which we will expand,” he added. “Making our city safer means taking on historic challenges like poverty, substance abuse, childhood trauma, mental health, hopelessness and all the factors that put too many people on a path that leads to crime and tragedy.”

Greenberg was sworn in by Kentucky Supreme Court Justice Angela Bisig using the same Torah he was given during his Bar Mitzvah in 1986. As is required by Kentucky’s constitution, he swore that he has never engaged in a duel with deadly weapons.

Kentucky Governor Andy Beshear sat in the front row of the crowd, directly in front of the podium where Greenberg delivered his inaugural address.

Outgoing Mayor Greg Fischer, who took office in 2011, was also in attendance.

Greenberg, who is also the co-owner of Ohio Valley Wrestling, survived an assassination attempt in February when a man walked into his Butchertown campaign office and fired a handgun at him several times. According to Greenberg, one of the bullets fired grazed his sweater and shirt, narrowly missing him. Quintez Brown, a local activist, is in federal custody facing both state and federal-level charges for the shooting.

While Greenberg has said in the past that the attempt on his life strengthened his commitment to public safety, he made no mention of the shooting on Monday, instead revisiting themes from his campaign.

“While some parts of our city are growing and thriving, there are neighborhoods that are hurting,” he said. “We must build on the work that’s happening in West Louisville and direct more investment and resources to these proud neighborhoods. That’s one of the ways we’ll work to counter the impact of generations of disinvestment and systemic racism.”

He added: “There is so much we need to do because the promise of our city is still out of reach for far, far too many people.”