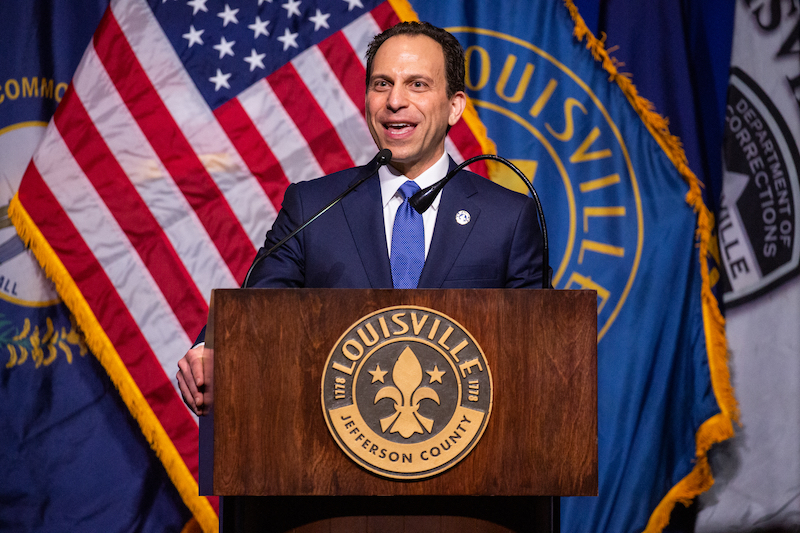 Craig Greenberg is sworn in as the 51st mayor of Louisville on Jan. 2 | Photo by Carolyn Brown.

On Jan. 2, businessman Craig Greenberg was sworn in as Louisville’s 51st mayor.

Greenberg’s opponents warned he would be a continuation of the administration of Greg Fischer, another businessman turned politician, who led Louisville for the last 12 years. But Greenberg is adamant that his administration will forge a new direction and change the way things are done in Kentucky’s largest city.

Here are four challenges that the new administration will face.

Public safety was Greenberg’s marquee issue on the campaign trail and remains at the top of his agenda in office.

In his inauguration speech at Metro Hall on Jan. 2, Greenberg said his administration’s “first and highest priority” is “making Louisville a safer city.”

“That means a city where we all feel safe, in every neighborhood, every business, every park and every bus stop. That’s critical and necessary everywhere, and especially right here as we work to reinvigorate our beautiful downtown,” he added.

After back-to-back years of record-setting homicide numbers in 2020 and 2021, Louisville saw about an 8% drop in homicides last year according to statistics released by the Louisville Metro Police Department in late December. LMPD also said non-fatal shootings had dropped by a third from 2021.

Greenberg, who survived an assassination attempt at his Butchertown campaign office last February, says while the city’s short-staffed police department needs to be bolstered, they are only one part of reducing violence.

“Becoming a safer and more just city is essential to everything we do. And let me be clear: improving public safety is about much more than policing. It’s also about preventing as many crimes as possible through outreach, investment, communication, building trust, community violence intervention strategies, which we will expand,” he said in his inaugural address. “Making our city safer means taking on historic challenges like poverty, substance abuse, childhood trauma, mental health, hopelessness and all the factors that put too many people on a path that leads to crime and tragedy.”

As of this writing, Louisville has seen four homicides over the first 60 hours of 2023.

Parallel to Greenberg’s message of public safety were his calls to make LMPD the “best trained, the most trusted and most transparent police department in America.”

Fulfilling that goal is likely a long road. Trust in police in Louisville remains low after the killing of Breonna Taylor, a heavy-handed response to protests that followed and further instances of police misconduct coming to light.

The department is currently facing a wide-ranging Department of Justice pattern or practice investigation that is ultimately expected to result in a potentially long and costly federal consent decree.

Separately, the DOJ has indicted seven LMPD officers on federal misconduct charges in the past year alone. In October, two of those officers were sentenced to prison for assaulting pedestrians by throwing drinks from unmarked police vehicles; while one officer involved in the drinks-throwing received three months in prison, the other received two and a half years for his additional role in a scheme where he used police technology to help hack and extort with stolen sexually explicit material. Katie Crews, the LMPD officer who fired pepper balls in the moments leading up to the fatal shooting of West End barbecue chef David McAtee on June 1, 2020, is set to be sentenced later this month. And of four LMPD officers charged in relation to the March 2020 raid that killed Breonna Taylor, one has pleaded guilty while three await trial.

Under former Mayor Greg Fischer, the city said it was working to get ahead of the DOJ’s findings by making proactive reforms. In May, then Chief of Police Erika Shields told Metro Council that there were things in LMPD’s outdated lesson plans she was embarrassed by and that she wanted more civilian oversight of police training. (Investigations by LEO Weekly found LMPD training materials that portrayed police as avengers who carry out God’s wrath as well as a course that aimed to have students be able to “identify aspects of Hispanic/Latino culture that may pose hazards to law enforcement.” Reporting by WDRB uncovered LMPD warrant training materials that included the Ernest Hemingway quote “there is no hunting like the hunting of man and those who have hunted armed men long enough and liked it, never really care for anything else thereafter.”)

In November, Shields announced she would be stepping down in the new administration, later saying she had essentially been given the option of resigning or being fired. Speaking to KET last month, Shields warned that she expected the DOJ report on LMPD to be “scathing” and said she feared that a high turnover rate in leadership at the department could lead to officer misconduct.

In early December, Greenberg announced that Jacquelyn Gwinn-Villaroel — who was Shields’ hand-selected second-in-command — would lead the embattled department as interim chief of police the day he took office.

The administration is currently searching for a permanent police chief.

The trust shattered by the police killing of Breonna Taylor was only exacerbated by city government’s taciturn response when people demanded answers. That lack of transparency — and the public’s frustration with it — would become a hallmark of the last years of the Fischer administration.

Greenberg says he will handle things differently and made transparency a cornerstone of his campaign.

“We will improve transparency, collaboration and accountability at LMPD and throughout all of Metro Government — and that starts with me,” said Greenberg in his inauguration speech on Jan. 2. “Part of my job as mayor is holding others accountable. And I expect every one of you here today and everyone in the city of Louisville to hold me accountable.”

With the administration in its infancy, it remains to be seen how those promises of transparency play out in reality. However, the Greenberg administration will likely have its work cut out even if it does go in with the best intentions.

LMPD, an organization long considered opaque by journalists, remains tight-lipped on many incidents and even has refused to cooperate with the city’s inspector general’s office, a city agency charged with investigating potential police misconduct. And a short-staffed open records department already facing a backlog of requests means open records requests, a staple of transparent government and accountability, can take many months to fulfill.

Ahead of his inauguration, Greenberg told LEO Weekly that the turnaround time on open records requests was “unacceptable” and that his administration would work to budget more open records staff. He also told LEO that “more transparency and accountability within LMPD are critically important as we look to continue rebuilding trust between the department and the entire community it serves.”

In an interview with LEO in March of last year, Greenberg said it was important for LMPD and the city to disclose details about incidents when they occur and admit when mistakes are made.

On his first day in office, Greenberg recognized that “the promise of our city is still out of reach for far, far too many people” and that “while some parts of our city are growing and thriving, there are neighborhoods that are hurting.”

Louisville is home to often glaring inequity; in parts it is a city of immense wealth, but it is also a city of sprawling food deserts, abandoned homes and the cyclical trap of generational poverty. On the map, those inequities are often mirrored by race, with Black-majority areas by and large more underrepresented and impoverished than whiter areas.Over the decades, promises have been made to combat poverty and inequity. Yet, Louisville’s divides remain as sharp as ever.

Greenberg says his administration will work to address those longstanding inequities.

“We must build on the work that’s already happening in West Louisville and direct more investments and resources to these important neighborhoods. That’s one of the ways we’ll work to counter the impact of generations of disinvestment and systemic racism,” Greenberg said in his inaugural address. “It’s also essential that we consider racial justice and equity as part of every decision we make at Metro Government.”

Inequity in Louisville and across the country is intertwined with housing needs.

Running through all of Louisville’s 623 voting precincts while campaigning, Greenberg said he saw both the city’s diversity and its inequity firsthand.

“One of the things I learned running all those miles across the city during my campaign is that there are people in parts of our city who don’t feel like they are part of our city. We have to change that, starting now,” he said during his inauguration. •