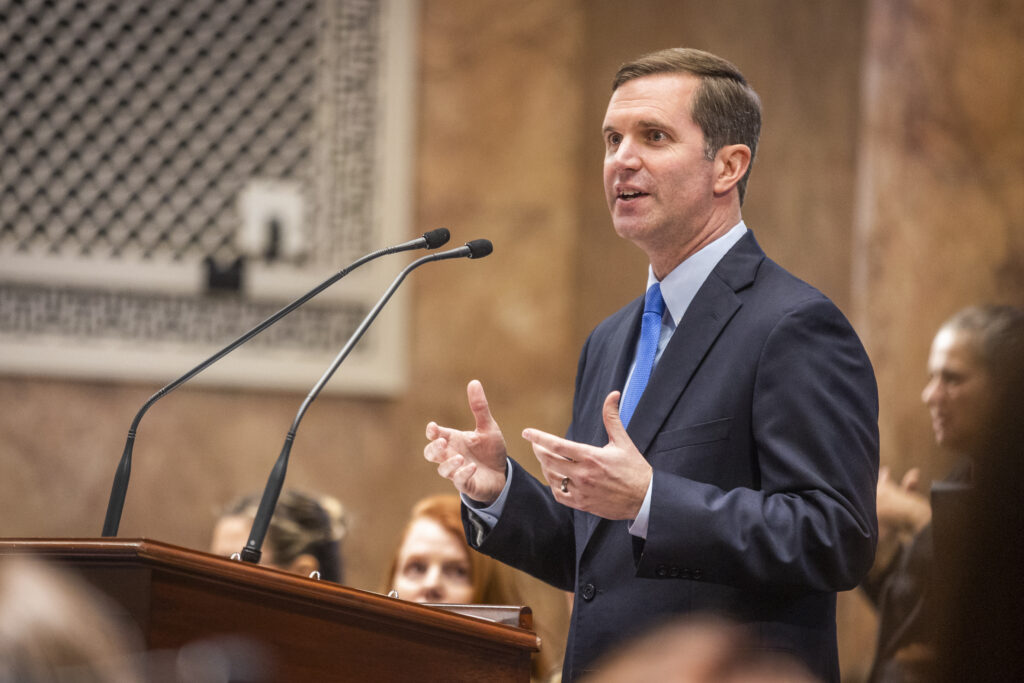 Kentucky Gov. Andy Beshear gives the State of the Commonwealth address in Frankfort. (Photo for Kentucky Lantern by Arden Barnes)

FRANKFORT — In his fourth State of the Commonwealth Address, Gov. Andy Beshear spoke glowingly of Kentucky’s economy and optimistically of its future, while calling on lawmakers to approve 5% raises for teachers, a proposal that got a cold reception from Republican leaders.

Speaking to a joint-session of the General Assembly, the Democratic governor highlighted the state’s resilience through hardships in recent years, including pandemic and natural disasters in the eastern and western parts of the state, as well as a strong economic outlook, bolstered by a state budget surplus and recent industry announcements.

“As Kentuckians, we share the values of faith, family and community,” the governor said. “And if we double down right now, lead with our values, and push politics aside, there is nothing that we cannot achieve. Our future is brighter than it’s ever been.”

Afterwards, Republican legislative leaders told reporters that Beshear was claiming too much credit for Kentucky’s successes.

“I think the state’s in a pretty good shape but I don’t think it’s due to all the efforts that he took credit for tonight, because much of the things that he talked about we know from the dealings, he had very little to do with,” said Senate President Robert Stivers.

House Speaker David Osborne said lawmakers put enough money into the budget enacted last year for school districts to give employees raises if they choose. Appearing on KET, Stivers said opening up the budget in this non-budget session for “one-off things” is a “quite terrible way to budget.” Stivers also said that, while Beshear touts cooperation, the governor has not contacted Republicans to talk about teacher pay raises.

Osborne pointed out that the House has approved bills legalizing both that died in the Senate.

In recent months, Kentucky’s juvenile justice system has made headlines for violence, including a riot that state police responded to in Adair County. The Beshear administration enacted some policies that separate juveniles in the system by level of offense and by gender. On Wednesday, the governor said that to keep families safe, it must be recognized “that far too many violent crimes are being committed by juveniles.”

As part of reform initiatives, Beshear said his administration will ask the General Assembly to increase salaries for employees, funding to upgrade facilities and enact other changes to state laws.

Speaker Osborne said that the legislature approved pay raises in the most recent budget and that a study from the Personnel Cabinet due in 2021 would give lawmakers insight on how to use funds in the future.

“There is a need for pay increases in juvenile justice and corrections, in lots of different areas,” Osborne said. “But I think that you’d have to look at it in its entirety as opposed to trying to piecemeal it together and make some common sense out of it.”

Both Osborne and Stivers said members of the House and Senate were working on legislation to address juvenile justice in the state.

Lawmakers returned to Frankfort for the 2023 legislative session Tuesday. They will meet through March. During his address, Beshear said he worked with House Minority Floor Leader Rep. Derrick Graham, D-Frankfort, to file bills for the governor’s Education First plan, medical marijuana, legalize sports betting, additional raises for state workers and a 1.5% pension increase for retirees in the state employee retirement systems.

Details of the Education First plan include a 5% pay raise for every public school educator and universal Pre-K for children. Addressing the shortage of 11,000 Kentucky teachers “absolutely requires a pay raise,” Beshear said.

“As a parent of two public school students, I know the impact of not having an English, a math or a science teacher. I sat beside my children during distance learning, just like so many of you,” the governor said. The simple fact is you can’t address learning loss without enough educators. Put another way: You can’t catch a kid up in math without a math teacher.”

The governor also called on the General Assembly to legalize medical cannabis and sports betting. In November, Beshear signed an executive order that allows Kentuckians with certain severe medical conditions to possess and use small amounts of legally purchased medical cannabis for treatment. It recently went into effect.

“Far too many Kentuckians are suffering from life-threatening and chronic conditions, like our veterans with PTSD, or Kentuckians with cancer,” Beshear said.

Just over a year ago, Western Kentucky was ravaged by tornadoes and flash floods devastated Eastern Kentucky last summer. In his remarks, Beshear noted that four Kentuckians died following a recent polar front that brought freezing temperatures and wind chills to the state.

The governor highlighted the state’s response to natural disasters. Numerous agencies, such as the Kentucky State Police, Department of Fish and Wildlife and the National Guard, aided in rescue efforts. More than 1,300 Kentuckians were rescued in floods, he said. He also gave a nod to Kentucky State Parks employees, as lodges and resorts were opened to house Kentuckians affected by disasters.

After the floods, the General Assembly passed more than $200 million to aid Eastern Kentucky. Beshear thanked lawmakers for supporting the funds. “This wasn’t a bipartisan act; it was a non-partisan act,” he said.

Last month, the Beshear administration announced the Olive Branch Community, which will  rehome families in Eastern Kentucky, would be built on land in Knott County out of the flood plain. At the time, the governor said the community is a chance to “reimagine the future about where we locate schools and medical clinics, parks and other opportunities.”

The governor mentioned the plan and again thanked Shawn and Tammy Adams, who were in the audience, for donating acres for the community. Beshear also gave an update on the family of Kara McKnight, who lost their home during the tornadoes. They were watching from their living room, he said.

“We want the people of Eastern Kentucky to know that we love you. We care about you. And we’re going to be there for you, every step of the way, as long as it takes. And for those in the West affected by the tornadoes, we know there is much work left to be done,” Beshear said. “We remain committed, and we look forward to celebrating each milestone with you.”

Senate President Stivers said the legislature has a couple of options to address recovery in both regions, appropriating more money or broadening the use of funds already allocated. He said not all funds from the Western and Eastern Kentucky SAFE funds have been drawn down.

Beshear also touted recent economic developments around the state, such as the BlueOval SK Battery Park in Hardin County and the bourbon industry’s year of record growth. Within two years, his administration announced the creation of 42,600 jobs, he said.

He was recently elected as the states’ co-chair of the Appalachian Regional Commission. The governor said he promises to “create great jobs all through Appalachia and beyond.”

Earlier Wednesday, Beshear and other state leaders welcomed President Joe Biden to northern Kentucky after the federal government invested $1.6 billion in grants for the Brent Spence Bridge Corridor Project across the Ohio River. In his address, the governor said leaders have worked together on projects that improved access to clean water in homes and expanding high-speed internet.

Ahead of the address, the Republican Party of Kentucky released a video and statement, criticizing Beshear for his handling of the coronavirus pandemic, which included temporarily barring large social gatherings, which affected churches across the state.

“During his tenure, Andy Beshear has threatened Kentuckians, supported higher income taxes during 40-year high inflation, botched basic governing functions, presided over historic learning loss for our students, and championed a radical agenda on race and gender that is out-of-step with our Kentucky values,” RPK spokesman Sean Southard said. “This year, our new year’s resolution is to make sure Andy Beshear is no longer in the Governor’s Mansion come December.”