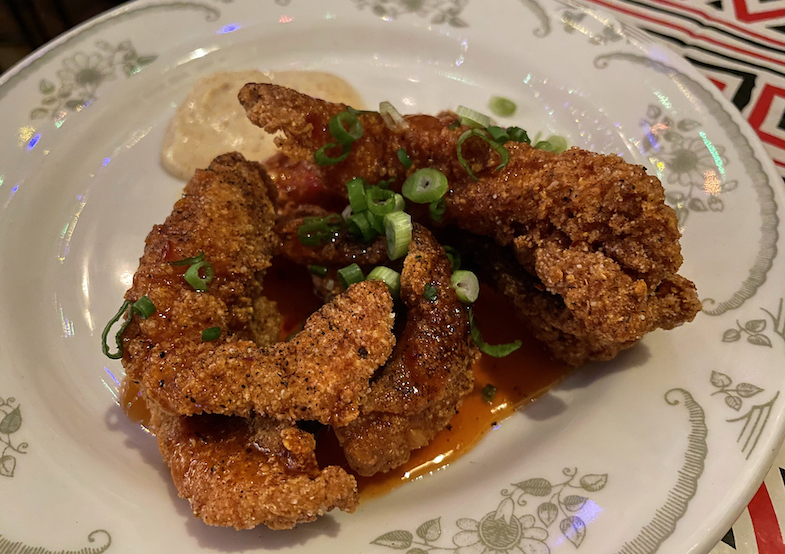 Tender, mild cornmeal-breaded and fried Kentucky catfish nuggets hit the spot, and there were plenty of them.

I recently had the pleasure of dining at North of Bourbon, a New Orleans-style restaurant in Louisville. From the moment I walked in, I was transported to the vibrant, colorful world of the Big Easy.

The atmosphere at North of Bourbon is lively and energetic, with good music, colorful Christmas decorations, and the smell of good food and spices in the air. The menu is filled with classic New Orleans dishes as well as more unusual offerings. The portions are generous, and the flavors are bold and spicy. But the real star of the show is the bourbon.

Okay, hold it right there. I have to confess: I loved North of Bourbon but those aren’t my words. I asked the new artificial-intelligence ChatGPT to write me a review in the style of Anthony Bourdain. It complied as a good robot should, without complaint.

This is kind of scary. Since I have no interest in an AI bot putting me out of work, it stops right here. All the rest of today’s words are mine. But I can’t deny this reality: ChatGPT got the basics right.

North of Bourbon, which opened New Year’s Eve in the heavily renovated Goss Avenue quarters that formerly housed Mr. Lee’s Lounge, is one of the city’s most popular tables now.

Pledging to blend “Bourbon, Louisville, and New Orleans into a unique  Southern experience,” North of Bourbon’s menu is inspired by the Louisiana and Mississippi roots of Chef Lawrence Weeks and the restaurant’s owners, leavened with other Southern classics that focus on the connections between Louisville and New Orleans.

If you go during the next week or two, you’ll find that Louisville-Cajun-Creole flavor further tempered by a substantial blast of… Christmas! It’s ho-ho-ho all the time during the season, with a flotilla of holiday lights hanging overhead, Christmas tchotchkes on the walls and tables, Christmas rock on the sound system and even a gigantic blow-up Santa straddling the front door.

More permanent fixtures include four booths enclosed in gigantic bourbon barrels, and a bar that runs the length of the long, narrow room, framed by backlighted shelves showing off the restaurant’s 300-plus bourbon and rye selections.

Chef Weeks’ dinner menu offers a thoughtful selection of just 15 items, all clustered into a single list that includes appetizer-type plates, salads and dishes more suited as entrees. Baked oysters are $4 a piece (or you can shell out $55 for a dozen with “champagne” — actually four 8-ounce pony bottles of Miller High Life). Most of the larger plates are priced in the $20-$30 range, including a full-pound 3D Valley Farm Indiana pork chop with horseradish creamed leeks, roasted turnips, spiced cane syrup glaze and puffed sorghum.

There are also lunch, happy hour and Sunday brunch menus, plus extensive cocktail options and your choice among those 300 bourbons in one-ounce or two-ounce pours.

Speaking of booze, during the Christmas season the restaurant’s usual craft cocktail list has given way to “Sippin Santa,” a Tiki-Christmas mashup. Oddly, and somewhat to my disappointment, only one of the holiday cocktails included bourbon, in a mix that didn’t appeal to me. I consoled myself with a Demarara rum-based “Sippin’ Santa” ($13), a Christmasy blend of rum, amaro, lemon, orange and … gingerbread mix, served in a funny mug depicting Santa in surf attire.

We also enjoyed a one-ounce taste of Knob Creek Rye ($6).

As we waited for our food, nibbling on complimentary cups of spicy boiled peanuts, we became aware that our seating was, frankly, uncomfortable. Sit on a hard, bumpy, low bench with no back for two hours and see how that makes you feel! To the restaurant’s credit, though, only the two tables by the front windows appear problematic. Avoid them if you can.

But that was our only complaint. Once the food started coming, we weren’t even thinking about the seats.

Peppered catfish nuggets ($17) hit the spot too. Eight dark golden-brown, cornmeal-crusted strips were mounded on the plate, drizzled with hot-sweet tiger sauce, and sprinkled generously with thin rounds of green onion. A dollop of spicy mustard aioli puddled alongside.