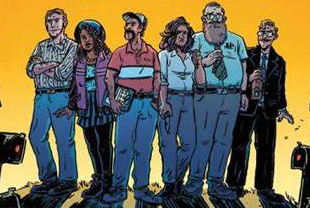 What do you get when you put together a group of burnouts, rejects, drifters, and lost causes? Apparently a damn good door-to-door sales team. Maxine (Max for short) is a drifter looking to get where she can. While hitchhiking, she snags a ride from a group of five kindred spirits and is immediately introduced to their life of devotion to earning money to burn through. What this group of misfits doesn’t know is that getting involved with Max will pull them into a world they can’t even begin to imagine. 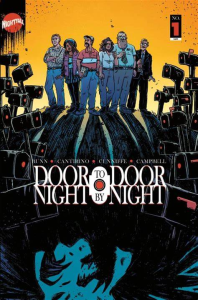 Door to Door, Night by Night starts off as simple historical fiction about a group of vagabonds trying to make a living, but abruptly flips the switch into something much more. Bunn does a fantastic job of easing the reader into feeling comfortable with this messy group of characters, giving the reader just enough detail about their pasts to let us know they’re troubled. This story of a simple group of vagabonds is complemented by Cantirino’s loose, rough lines and crosshatching, as well as Cunniffe’s subdued, warm colors.

Although the pages are occasionally interspersed with panels of shockingly vibrant violence and hints of mystery, the sudden turn is impactful. Small towns can be deceiving, hiding monster-riddled secrets, but with Max’s involvement they’re brought to the surface as their routine stop turns into a nightmare.