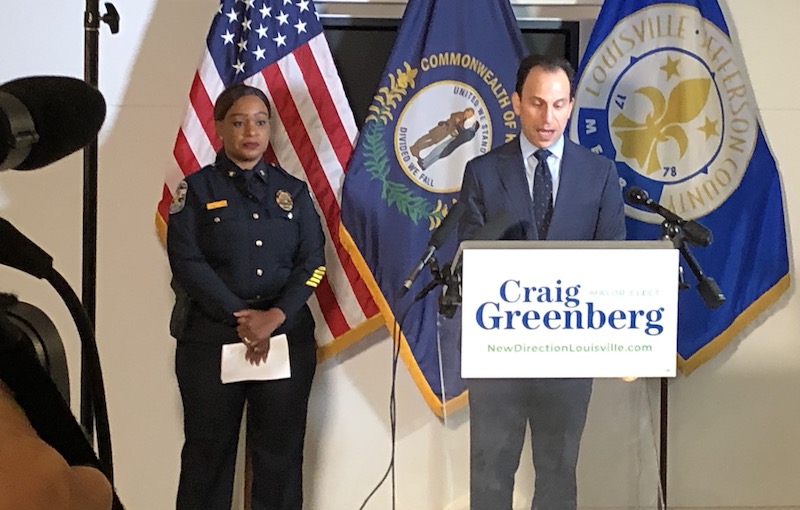 Gwinn-Villaroel is set to become interim chief of police the day that Shields resigns on Jan. 2, 2023, the same day Greenberg assumes office.

The move comes as the city awaits the findings of a wide-ranging Department of Justice investigation into Louisville’s police force that is expected to ultimately result in a consent decree.

At a press conference on Thursday afternoon, Greenberg said that Gwinn-Villaroel was selected after a “thorough vetting process” that included input from his transition team and the community. He also said that a nation-wide search for a permanent police chief will begin when he takes office, and that Gwinn-Villaroel will be considered for that position, as well.

“She has earned the respect and admiration of people within LMPD and throughout our entire community,” Greenberg said at the press conference. “She is committed to transparency and to continuing the work of building trust with the community.”

On Thursday, Gwinn-Villaroel, a 24-year veteran of the Atlanta Police Department who joined LMPD last year, said her priorities include reducing violent crime and building trust with the community.

“My goal is to keep the department focused and to serve the city of Louisville with the highest standards,” she said.

Gwinn-Villaroel followed Shields from Atlanta — where Shields had served as chief until June 2020 — to Louisville, taking over as deputy chief last year.

The two women share a tight bond, having come up together as young officers with the Atlanta Police Department, at times working undercover while posing as prostitutes wearing outfits purchased at Goodwill. Among those who knew they were cops, the partners were nicknamed Ebony and Ivory.

“We taught each other; we were yin and yang,” said Gwinn-Villaroel told Louisville Magazine in 2021. “I like to say for Erika and myself, what she lacked was my strength, and vice versa. We fed off one another.”

Speaking on KET’s Kentucky Edition on Thursday night ahead of the announcement, Shields said that Greenberg had forced her out of the department, essentially giving her the option to resign or be fired.

“I don’t like how they’ve gone about this. I don’t think it’s in the best interest of the department. And I think the department is being highly politicized,” she said.

Cycling through multiple chiefs in a short timespan — especially as the department awaits what she believes will be a “scathing report” from the DOJ — could see the department “backsliding quickly,” Shields warned.

“That lends itself to underperformance within the department, but it can also lead to misconduct, because when you don’t have strong leadership and continuity of leadership, things rear their heads,” she added.

Shields took over as LMPD’s chief in January of last year after months of racial justice protests following the March 2020 police killing of Breonna Taylor. When she took over, she was the fourth police chief in the span of seven months.

In April of last year, the DOJ announced a patterns or practice investigation into LMPD looking at things like use of force and potential discriminatory policing. In September, Shields and outgoing Mayor Greg Fischer publicly said that the results of that probe were expected in the coming weeks; on Friday, the mayor’s office told LEO Weekly that there was no update on when the DOJ findings would be released.