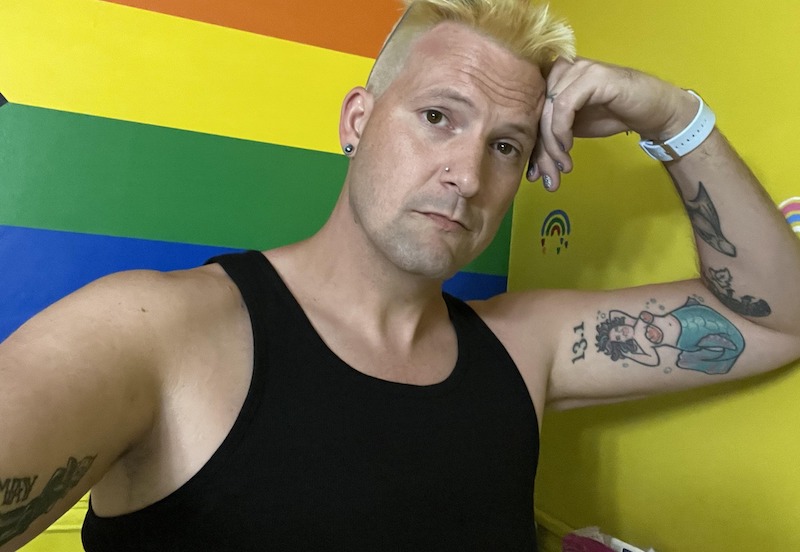 I don’t know what to say. It’s not that I don’t have anything to say about Club Q shooting in Colorado Springs. I have too much to say, and there are too many people I want to say it to.

I’ll start with straight readers. Think back to your teens and 20s. If you’re in your mid-40s like I am, even your 30s have started to feel like a faraway land. Now, remember that one place: that one shop. That one store, that one diner ­— maybe it was a beloved Louisville landmark like Ear X-tacy, or maybe it was a late night place like Steak and Shake — unremarkable except for the friends you spent time with there, talking and bullshitting into the wee hours of the morning. How did it smell? How did it look? What sort of music is usually played there? No matter how old you are, I bet you still remember that time in your life when there was only one place you felt like you belonged. Now, just to twist the knife, imagine that it was also the only place where people didn’t yell insults at you. The one place where it was safe to tell someone you had a crush on them without the fear that they might beat the shit out of you. And if you were in love already, this was the one place you could safely be in love. Think about that one place, picture it, put yourself there, feel loved, feel accepted, feel safe. Now picture someone who hates you walks in and starts shooting people.

Long before any of the churches in the country started accepting us, the Queer community had places like Club Q. In my 20s, I lived in Dayton Ohio and there was only one Queer club, one place where my roommate and I felt safe dancing. We literally called it church. He’d ask, “Are we going to church tonight?”

To the Queer community, I want to say, our churches have been invaded and attacked before.

Like marginalized and persecuted minorities across history, when we are attacked, we take the energy created by violence, and we turn it into fuel for our independence. Picture the brick that Marsha P. Johnson threw, starting the Stonewall riots after the New York City police broke into the Stonewall Inn and assaulted us in one of the few places where we felt safe. It kicked off the modern fight for Queer rights.

We can take this attack and use it to fuel the fight for safety, justice and equity. In Colorado Springs, the world discovered that the mythical  “good guy with a gun,” isn’t some cis-het, square-jawed action hero. It’s two pissed off people with nothing but their fists and high heels launching into action to protect their chosen family, because they knew they coudn’t wait for someone else to save them. They knew their safe and sacred space was worth fighting for.

I’ve been contemplating why I find this shooting so hard to move past, why it is still sitting on me. And I think what’s making it so impossible to grapple with or even articulate how it feels, is the amount of time I’ve spent in the last few years trying to make spaces feel safe for Queer people.

Queer people from all walks of life work hard to kick down doors and erase barriers, making the world safe for our chosen families, and for the generation of Queer people that comes next. I have trans friends who’ve fought public battles with chicken joints and sued nursing schools. I’ve seen artists work behind the scenes to encourage Queer representation onstage — drag queens reading books to kids and performing during brunch. Queer athelets, Queer writers , Queer middle management, Queer Shakespearians, Queer baristas, Queer DJs, Queer business owners, Queer artistic directors, all working to make places feel safe for Queer people. I try to do my part. I put a lot of Queer performers onstage in the last five years. I’ve tried to make make my classrooms a space that the increasing number of Queer kids who feel safe, and have room to bring their identity to their work.

When I woke up on Nov. 20, and read that a hate-filled, white, male terrorist named named Anderson Lee Aldrich had opened fire in one of my community’s safe spaces, walked into one of our churches and killed five people, injuring many more, it felt like I had failed.

I’m not alone in that either, many of my Queer friends also feel like we’ve failed.

But we haven’t. We just haven’t won yet. And while I haven’t been able to shake that feeling of failing, I’ve been reminding myself of our victories, and reminding myself that those victories add up. I think about all the Queer couples legally married, Queer families able to adopt, Queer kids that I teach and all the cities in Kentucky that have passed fairness ordinances. The terrorist act in Colorado Springs at Club Q isn’t a sign we failed, it’s a reminder that we need to keep fighting. This isn’t our failure. It’s one more battle in a war.

So keep fighting, keep working to make safe spaces and keep your bricks and your high heels close by.  •