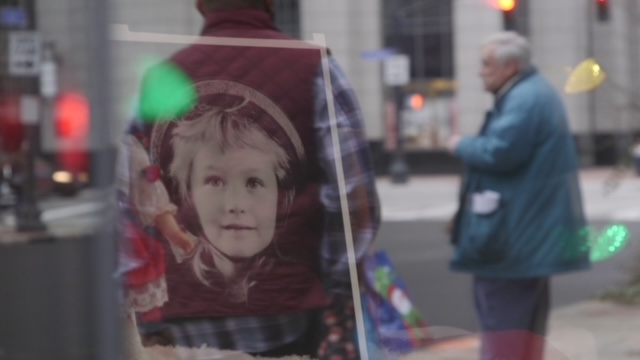 "I'm the Girl" documentary hopes to identify the mysterious subject of an old photograph.

In 1951, a Courier Journal photographer named Barney Cowherd took a photo of a young girl looking in a Louisville store window at Christmastime. The photo, called “Little Debbie,” appeared in Edward Steichen’s exhibit “The Family of Man” at the Museum of Modern Art in New York City in 1955 and has since appeared in print numerous times, though it is now on display permanently in Luxembourg.

Cowherd never identified the girl, but a number of women believe that they might have been her — and a new short documentary will tell the story of the quest to figure out who she was.

The 30-minute documentary “I’m the Girl – The Story of a Photograph” features interviews with a few women who believe that they were (or might have been) the girl in Cowherd’s photo. Co-producers Katherine and Thom Southerland, who are brother and sister, believe the woman is their mother, Barbara Southerland, who died in 2004.

The movie has already played at several film festivals, but it will have its first public showing in Louisville at Baxter Avenue Theatres on Sunday, Dec. 18, at 4 p.m. Admission will be free, but guests are asked to bring a donation for Toys for Tots.

Work on the movie began in 2014, according to a Courier Journal article — and, in fact, that article is what led a number of the women to reach out to the Southerlands, according to a more recent article about the movie’s release.

Speaking to LEO, co-producer and filmmaker Thomas Southerland said that he first discovered the photo when it ran on the cover of Louisville Magazine in the 90s. Other people in his family were already aware of the photo and had believed for a long time that his mother, Barbara, was the girl — as Southerland puts it, “It was a little bit like family folklore.” Part of his inspiration for making the movie was the opportunity to pay tribute to the memory of his mother and other women of her generation.

Even so, the movie doesn’t actually prove the girl’s identity — in fact, not all of the women interviewed fully believe that they are her.

Still, Southerland hopes that viewers take away a sense of humanity from the movie, which spotlights ordinary women who don’t seek the spotlight and might not be featured in a documentary otherwise. Even the photo itself, he pointed out, is a candid shot, not a posed one.

“Most films are made about people who are powerful or rich or famous, and there’s something interesting about a film that’s about otherwise everyday people who have some connection to something that might outlive them.”

“The main takeaway,” he added, “is just how powerful a single image can be that it can stand the test of time.”

Watch the trailer for the movie here:

I’M THE GIRL – trailer from Thomas Southerland on Vimeo.&l;.&lt;/p>