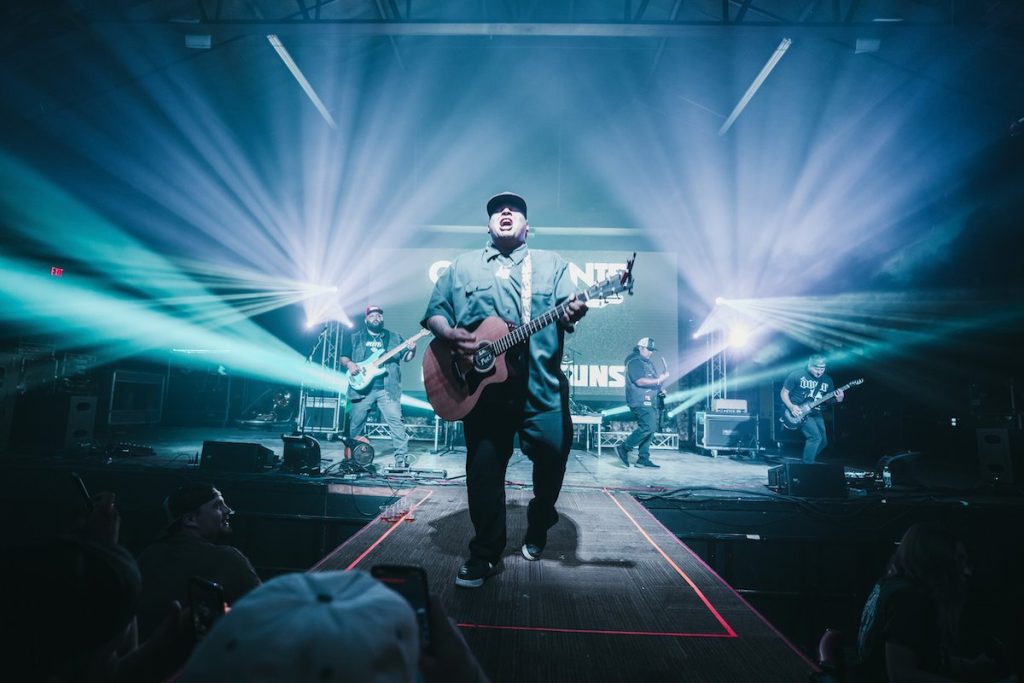 LEO caught up with GHG’s Giovannie Yanez and Classless Act’s Derek Day to talk about the bands, their music and show.

LEO: Tell me a little background about the band and the sound and influences.

Giovannie Yanez: Giovannie and the Hired Guns is six guys that are on stage that bring this high octane energy that tries to bring this ‘everybody fits, don’t care what anybody thinks about you,’ kind of thing when you come to our shows. Our influences are everything from, from Norteño to Tejano music, to Deftones  to Frank Sinatra to all these different styles of music, to hip-hop, reggaeton, whatever it is. We’re all kind of mixed into that.

My tios, my uncles, they had this band and it was this Norteño band. My uncle played the accordion and he sang, and I remember going over to my uncle’s house sometimes and he’d be in there practicing with some of his buddies. It’s kind of insane thinking back now, because my uncle was around my age, that I am now, when he was doing that.

Your look is very reminiscent of the ‘80s hair metal days. Tell me a bit about that homage and your ties to that era.

Derek Day: You know, they say perception is reality and I suppose in this instance you may call Classless Act a surreality, because we actually have no connection to the ’80s hair metal era in our music, though we loved working with Mötley Crüe and are so grateful to those guys for taking us on the Stadium Tour this summer. Some people have said that about our music though. They’re usually people who’ve only listened to the first three or four tracks on our album. The truth is that our influences are Ray Charles and Bowie, Rush and The Grateful Dead, Queen and The Strokes, My Chemical Romance and Foxy Shazam and of course The Beatles and Led Zeppelin. (Can you guess who’s who?) And if you dive a little deeper into Welcome to the Show, you’ll find this to be sincere. I can tell you one thing, you won’t find a single can of hairspray backstage at a Classless Act show.

Your generation has had the benefit of so much music via the internet, how did that shape who you are as musicians and how you pulled your sound together as a band?

DD: The internet has definitely been a good friend with information, but we like to pay homage to our musical gods by doing it how they did it. We go out to live shows, listen to records and read the sleeves. As we grow older, the band finds that our material hits home a little harder when we exist with our bare feet in the dirt of the earth.

When did the bands start? What are some of the goals?

GY: The band started sometime around 2018. It might have been around there  I mean, when it really, really clicked. I had some on and off guys throughout the years, but where it really felt right was probably six, five years ago, honestly, where the band actually formed.

DD: Us five dudes have a newfangled ambition with our vision. We want to be fun, even with the hard stuff, whatever meaning you give to that. We’ve been hungry for a sweet honey balance of musicality, poetry, quirk and minimalism.

Tell me about the emotion behind your music:

GY: Every time that I perform those songs, it always brings me back to that scenario of what was going on in my life. I really think that whenever you’re performing or you’re maybe, you know, affecting somebody else in that crowd. Somebody else could be going through, through that. And it impacts it way even more.