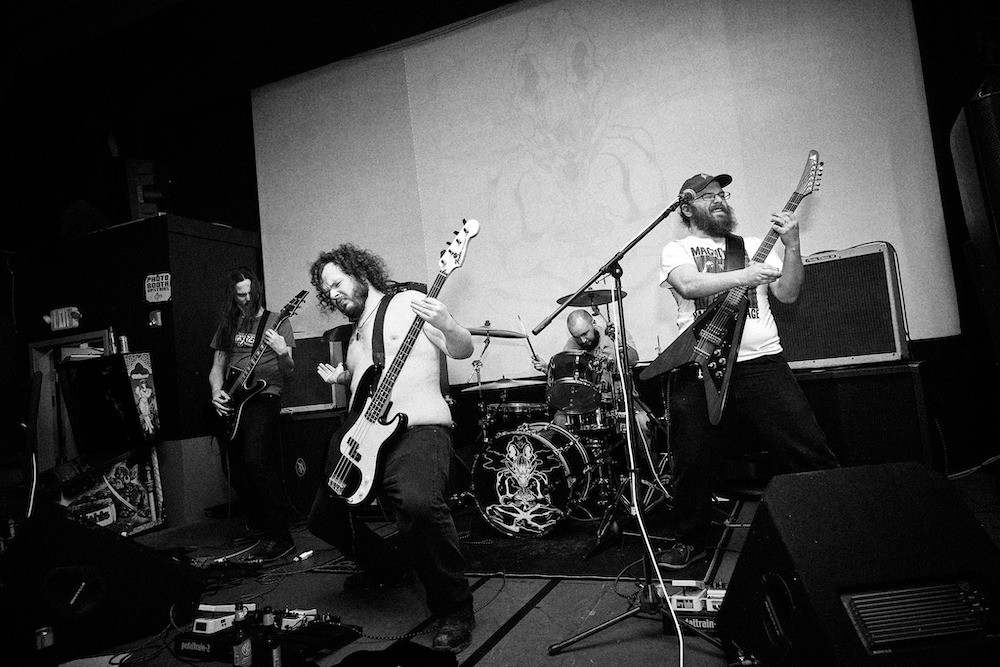 Of the many music genres associated with the consumption of cannabis, one directly pulls its moniker from the action. The stoner bands generally find themselves the children of the acid generation, often playing slow, sludgy, heavy guitar with a bass groove perfect for a deep head-heavy indica or breaking out into the extended intricasies of psychedelia, perfect for a sparkling sativa.

In light of Governor Beshear’s executive order decriminalizing the possession and use of medical marijuana for qualifying individuals who legally purchase from other states starting in January, LEO thought it would be interesting to get the reactions of a few local stoner rock/stoner metal/doom bands. Certainly, not all individuals in the genre consume cannabis, but being in a band influenced by the celebration of the plant certainly gives the bands a perspective. Local and regional bands — The Glasspack, Batwizard, Baptiste, Shi-死 and StormToker — had plenty to say about the possibilities of weed in Kentucky.

“First off, the wrong word, ‘legalization,’ is being incorrectly used regarding the governor’s executive order,” says “Dirty” Dave Johnson, vocalist/guitarist of The Glasspack and a Kentucky-licensed attorney. “The correct term here is ‘decriminalization’, because the governor has issued an order to his subordinates to pardon and not treat possession of marijuana as a crime, but possession is still illegal under the applicable Commonwealth and federal laws.” Johnson continues: “He has done about all he can do regarding medical marijuana. He, like me, is also an attorney and knows the limits of his reach pursuant to the legal doctrines of federalism and separation of powers. If you think hard about this stuff, though, all he has really done with this order is lessen the burden on his law enforcement agents and prosecutors regarding folks driving through Kentucky with medical marijuana purchased legally under another state’s laws. This is good, but it is a far cry from ‘legalization,’ even of medical marijuana.”

Formed by Johnson in 1999, to date The Glasspack have released four full-lengths and two EPs, in addition to numerous splits and countless compilation appearances. The band has been on hiatus since 2011; however, 2023 will see the release of a new album titled Moon Patrol, one 40-minute-long single-track split into eleven segments. A vinyl seven-inch single to be released by Better Days Records is also in the works.

Regarding the order, Batwizard drummer Adam Colvin states: “I personally feel Kentucky missed a huge opportunity to be at the forefront of this movement with the state’s extensive history with the plant and the legalization movement. But this is a start. That said, having to travel to a state where you can legally purchase marijuana involves you potentially driving through a state or an area where it is probably still illegal on some level, which could present legal problems for the buyer. So I like it, but I don’t love it. With what has been going on in Colorado, California, etc., I think it’s fair to say that it is beyond time for it to be legalized federally, with a possible subsidy to be given for hemp production due to its vast potential. But I am happy Kentucky is beginning to take the right steps here.”

Formed in 2014, Batwizard plays “a sound steeped in a unique mix of stoner metal and doom with a big dose of hardcore and thrash metal.” Releases include the full-length album Medustritch in 2018 followed by two EPs; Voidfiend in 2020 and Infest Harvest in 2022.

“We shouldn’t be outlawing plants that grow naturally in the ground in the first place, especially plants that humans have been utilizing for thousands of years before someone decided they were ‘bad,’” said Baptise vocalist and guitarist Stephen Casciato. “It also seems pretty hypocritical for Kentucky to be a holdout regarding cannabis legalization when we’re the largest bourbon producer in the world! I personally am a big fan of alcohol in all its forms, but I’m also not going to pretend it hasn’t done far more damage to people than weed has. Hopefully, this is the first step toward Kentucky representatives realizing what their constituents really want and supporting them with updated lawmaking. After that, we need to get everyone locked up for marijuana offenses out of incarceration. Imagine being arrested and imprisoned for having a dried up plant that makes music sound good. Especially when just a few miles away, over an imaginary line, it’s completely legal. Bonkers.”

Baptise formed in 2019 with the intent of combining the hard-driving rock and roll of bands like Motörhead, the dark speed metal of Venom, the heavy riffing of Black Sabbath, and the sleaziness of early Mötley Crüe and W.A.S.P. Look for their debut full-length album in 2023!

“We don’t really have much specific as far as feedback on this front beyond simply agreeing that this is a small step forward towards an end goal of total legalization that we support” is the collective response we received from Louisville stoner doom, sludge metal band Shi – 死. Since forming in 2015, Shi – 死 “have been honing their brew of doom for distribution to a dive bar near you.” To date the band has released 6 EPs and 2 full-length albums, including their latest Basement Wizard.

Although not a local band per se, it just seemed wrong to do this article and not include Lexington’s StormToker. When asked about his thoughts on the matter, vocalist/guitarist Anthony Grigsby had this to say: “As far as the governor is concerned, I know his hands are tied and there’s not much he can do, but good job on him for pushing the order through. I would love to see recreational in our state. I would love to see the hollers of Eastern Kentucky full of marijuana plants to help the struggling people out there. The one thing that scares me about legalization in our state is if a couple greedy corporations come in and control all the growth. I think our weed should be grown by our people and sold to everyone, just like we do our bourbon. I think economically it would benefit everyone that lives here, and if you don’t like it, then don’t smoke it. It’s not for you, it’s for us. I think the pros out weight the cons. I don’t think you should have to pay to have a ‘card.’ Open it up for everyone just like alcohol and over-the-counter meds.”

Self-described as “sludge/stoner/groove metal trio from Lexington. Three vocalists. Loud AF. Bring the ear plugs!” StormToker formed in 2017 and have released 2 EPs, a full-length album and a handful of cover songs to date. Their latest release is a cover of CKY’s “96 Quite Bitter Beings”, in addition to their first full-length album, The Mother Tree, released in August of this year.