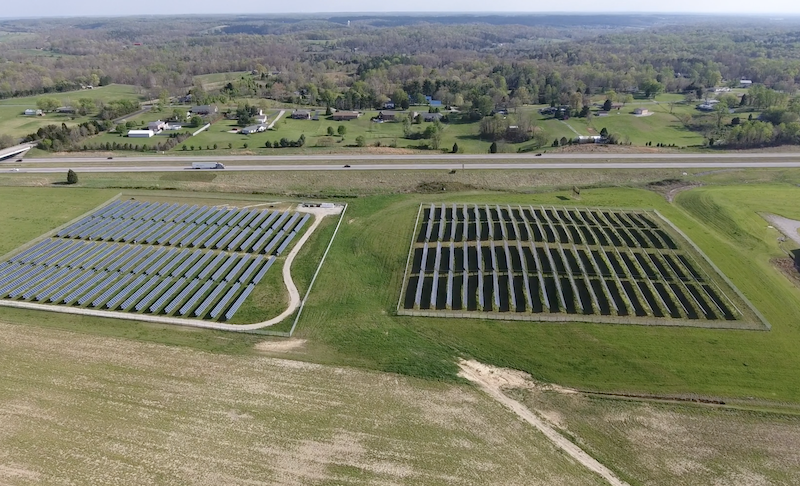 Kentucky’s largest utility, providing power to more than 1.3 million customers, is proposing to build two natural gas plants along with new solar installations to help make up for an energy supply shortfall created by the retirement of coal-fired power plants. It’s a plan that advocates of both coal and renewable energy in Kentucky strongly criticized for widely different reasons.

The proposal, filed Thursday by Louisville Gas and Electric and Kentucky Utilities before the Kentucky Public Service Commission, is an about-face by the utility compared to last year.

LG&E and KU had told the commission in an earlier planning document that because of the federal government’s focus of moving toward cleaner energy, building natural gas plants would only be feasible with the addition of carbon capture technologies. This week’s filing did not mention the implementation of such technology with the proposed natural gas plants.

LG&E and KU point to a federal plan proposed this year that aims to cut ozone emissions at power plants as reasoning for retiring two coal-fired power plant units, Mill Creek Unit 2 in Jefferson County and Ghent Unit 2 in Carroll County, by 2028 because the units lack emissions reduction technology. Another unit, E.W. Brown Unit 3 in Mercer County, is being slated for retirement because of maintenance costs, needing a $28 million “overhaul” to operate it safely beyond 2028.

“For decades, coal-fired generation has served our customers well, but many of our generating units are reaching the end of their economic life and it is no longer cost-effective to make the needed investments to meet increasingly stringent environmental regulations,” said LG&E and KU president John Crockett in a statement. “The least-cost solution to reliably and affordably meet our customers’ energy demands now, and into the future, is to further diversify our generation fleet and offer our customers more programs to help them save energy and money.”

The Kentucky Coal Association in a statement denounced the coal power plant retirements as “turning the lights out in every home in Kentucky” and claimed it could threaten the stability of the state’s electric grid. Studies and experts in renewable energy have shown wind and solar energy can be just as reliable as fossil fuels due to technological innovation.

The two proposed natural gas plants would each generate 621 megawatts (MW) and be located at some of the utility’s existing facilities in Jefferson County and Mercer County, the total costs for the plants estimated at more than $1.3 billion.

According to Reuters, climate scientists view natural gas as a cleaner energy sourcecompared to coal, producing about half the carbon dioxide when burned. Advocates for natural gas argue the fuel could be used as a “bridge” away from coal and eventually to renewables, but climate scientists also worry the wide adoption of the fuel could lock the planet into more catastrophic effects of climate change. In particular, the production of natural gas produces methane, a greenhouse gas much more potent at warming the atmosphere than carbon dioxide, although it dissipates faster.

The utility is also proposing to build two solar installations in Mercer and Marion counties — both with a capacity of 120 MW at a combined cost of more than $450 million — along with plans to get more than 600 MW of energy from other solar projects. The company will also plan a battery energy storage facility in Mercer County.

Steve Ricketts, the chair of the advocacy group Kentucky Solar Energy Society, panned the utility’s proposal as disconnected from the needs of the Kentuckians who want to see the utility decarbonize more quickly. He said the utility’s investments in solar is a “drop in the bucket” compared to investments made by other utilities across the country.

“They’re basically investing in two highly capital intensive (gas) plants with a highly variable cost of gas, which is going to come back and kind of bite them,” Ricketts said.

The Kentucky Public Service Commission in a strong rebuke of the utility earlier this year criticized a planning document prepared by LG&E and KU, saying that the utility failed to consider several cost-saving measures including the use of out-of-state wind power, energy efficiency programs and rooftop solar.

In the Thursday filing, LG&E and KU also proposed various energy efficiency programs to the commission including appliance recycling, rebates for businesses and an energy conservation program for small businesses and residences.

“We’ve put forward something that is moving us in what we feel is the right direction, understanding that this is a transition,” Collins said. “There are going to be more decisions that we make along the way.”