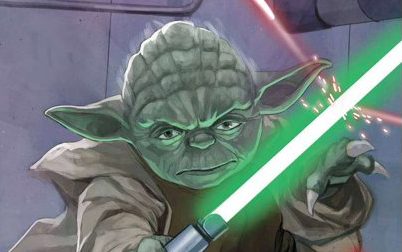 Star Wars Yoda #1
written by Cavan Scott
art by Nico Leon
Provided to LEO by the Great Escape
As an old school “Star Wars” fan, I always have mixed feelings about revisiting stories and characters that I love. On the one hand, there’s something satisfying about a mystery, and on the other hand, I’m a fangirl at heart and I’m always up for a good “Star Wars” story. The key word here being “good.” So far, Marvel and Disney have done a surprisingly good job with “Star Wars.” My only real complaint being the sheer amount of material they’ve released. When the comics started coming out, I thought I’d be able to read all of them. Ha!  Spoiler alert: that did not happen. However, I’ve managed to read a lot and been satisfied with most.
This book starts out with “The wise Jedi Master Yoda has lived a long life in service to the greater good of the galaxy.  After the rise of the Galactic Empire, he now spends his days on the secluded swamp world Dagobah, awaiting an important visitor and reflecting on his many adventures…” Spoiler alert #2: Luke Skywalker is not in this story. We’re going back farther than that. 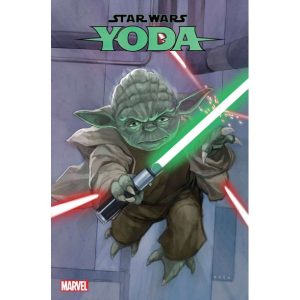 We see Yoda as we expect. He’s in his warm, cozy little home on Dagobah and he’s meditating when he’s interrupted in his thoughts by the voice of a student from his past. In this issue we don’t find out why she’s reaching out to him now, but we do find out how they met and became teacher and pupil.
I love mysterious Yoda, but seeing him in action is also pretty fun! Here’s hoping this book lives up to the expectations we have for this character and the universe that’s been created for him. Though we might prefer a mystery to stay unrevealed, these books can be so well written and thought out that we can let go of our preconceived notions about the source material and enjoy someone else’s take on it.