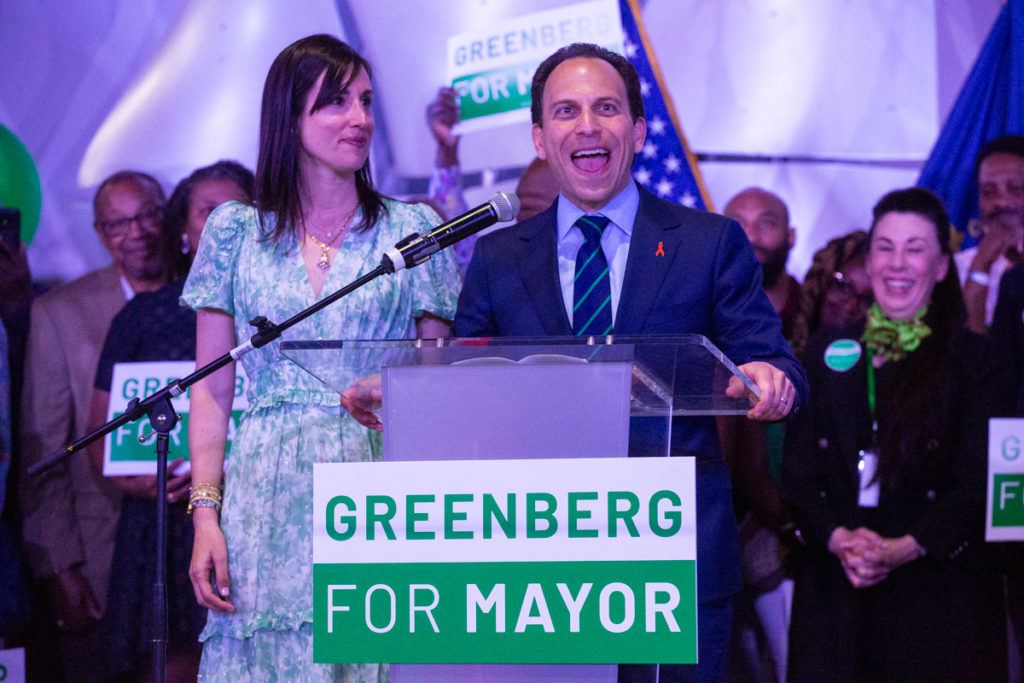 Craig Greenberg after claiming the Democratic nomination for Louisville mayor.Photo by Carolyn Brown

In Kentucky, open records are meant to be a simple matter, according to the state’s open records law: A citizen puts in a request to obtain or inspect documents held by a government agency, and, within five business days, that agency responds either with the files requested, a denial of the request based on specific exemptions to the law, or with a detailed explanation of the delay and the earliest date by which that the records may be inspected.

In Louisville, however, you can often forget about the five-day response time. And as for getting documents? Well, that can take many months of persistence and waiting, with the city blowing past deadlines it set to provide documents.

The city’s open records department consistently blames these slow times to respond to requests — and then to find, process and redact documents — on a large backlog of requests piled on a small staff dedicated to handling open records.

Incoming Mayor Craig Greenberg, who takes office on Jan. 2, says he plans on addressing the backlog, telling LEO Weekly that open records times in the city are “unacceptable” and that he is planning on increasing open records staff.

“Responding to open records requests in a reasonable amount of time is key to an open and transparent government and there needs to be significant improvement in this area,” he said in a written statement to LEO. “Some of the delays in turnaround time are unacceptable and we plan to budget additional staff in this area.”

In trying to improve the handling of open records in Louisville, the new administration will have its work cut out.

Among those who request open records in Louisville, frustrations have only been building.

In October, The 490 Project, an activist group pushing for police reform in Louisville, brought a lawsuit against the Louisville Metro Police Department over the handling of open records.

Of four open records the group submitted, “three remain unanswered months after they were submitted to LMPD,” the lawsuit said. A fourth request, for a citizen complaint filed against LMPD by a member of The 490 Project, was denied, with the city saying no such record existed. That raised concerns for The 490 Project that records were not being properly maintained as they knew that such a complaint exists and charged that such complaints, according to the city’s record retention schedule, must be held for two years.

A lawsuit complaint only represents one side’s argument.

In the wake of the 490 Project’s lawsuit, Metro Council is currently considering an ordinance sponsored by outgoing Council President David James and D-26 Councilman Brent Ackerson that, if passed, would request an audit of how LMPD maintains its records.

And despite more than half a year passing since the requests were filed, The 490 Project says it has only received a handful of records they requested. The group says the few documents they have received all came after they filed their lawsuit.

“Open records is boring, and we say there’s nothing sexy or cool about it. But citizens have a right to know how their government is behaving, especially considering we pay all of their salaries. So them obfuscating records or not retaining them properly — everyone should be upset by this,” said Abby Long, a member of the 490 Project, which gets its name from subtracting “12” (a slang term for police) from Louisville’s area code, 502.

The 490 Project’s experience was not unique. The Office of the Attorney General has repeatedly found that Louisville has violated the state’s open records law. Most recently, in a ruling earlier this month on an appeal filed by LEO Weekly, the Kentucky Attorney General’s office determined that Louisville Metro Government had repeatedly violated the Kentucky Open Records act by not responding to requests within the five days allowed and repeatedly saying that requests involving video would take six months to process, without providing adequate proof that such time was necessary. LEO Weekly decided to bring the delays to the Attorney General’s Office after it noticed that the city was using boilerplate language that it would take “up to at least six months to process” requests for police body camera footage and other video recordings.

In an August ruling on a Courier Journal appeal, the Attorney General’s Office also ruled that Louisville Metro Government had violated the Kentucky Open Records Act by not responding to requests within the five business days allowed, delayed access to records without providing the earliest dates when records would be available and when it demanded requesters use a specific electronic portal to submit requests.

“How bad is [Louisville Mayor Greg] Fischer’s track record?” Gerth wrote. “Even Attorney General Daniel Cameron, whose rulings on our open records system makes him only slightly more transparent than the Stasi, has opined that the city has repeatedly subverted the Kentucky Open Records act.”

According to Robin Berry, the city’s director of records compliance, the open records team is comprised of seven people, including herself and a supervisor. So far this year, the office has received 12,470 open records requests through the city’s online portal; last year they received 7,501 requests. While LMPD previously handled their own open records, Berry’s office took over LMPD open records as well starting last December, leading to higher workloads.

Currently, Berry said, there are 1,525 open records requests, with 478 past their due dates.

“The public servants on the Open Records team make every effort to respond to all requests in a timely manner,” said Berry in an email to LEO Weekly. “However, due to the voluminous number of open records requests being submitted by law offices, residents, and media, and with a staff of five conducting reviews and making redactions required by law to protect the privacy of our residents, the five-day turnaround for producing records is sometimes a challenge to meet. This small staff is responsible for other time-consuming tasks.”

Adding more staff to the department could speed up responses, but for transparency in open records in the next administration, there has to be a culture and commitment to transparency, said Amye Bensenhaver, co-founder of the Kentucky Open Government Coalition, a nonprofit that promotes access to open records in the Commonwealth.

“You don’t default to trying to find ways to make a record closed,” she said of the current administration’s handling of open records. “That’s where they’re expending a lot of unnecessary energy and resources in trying to keep these records away from the public, when they should begin with the presumption that records are open and only withhold them if there’s something uniquely sensitive about them.”

Two people on Greenberg’s leadership team — Dana Mayton, who will oversee the Office of Management and Budget (which oversees open records) and David Kaplan, who will be chief counsel — previously worked in the Kentucky Attorney General’s Office.

“There’s an opportunity there, it’s just a question of whether they’ll make that commitment and really carry through,” she said.

It’s not just members of the public who have a hard time getting transparency from city government agencies; the Office of the Inspector General, which was created by Metro Council legislation following the 2020 police killing of Breonna Taylor to provide additional oversight to LMPD, has repeatedly said the police force has been uncooperative with their investigations and has at times withheld key documents, including body camera footage.

That lack of cooperation has slowed the inspector general’s office’s investigations into potential police misconduct.

Speaking to the TV station WLKY recently, Inspector General Edward Harness said: “Recently I’ve come to the conclusion that they’re an organization that’s acting like they have something to hide.”

In a phone interview on Thursday, Harness told LEO that without the roadblocks, several investigations would have likely been completed and that the office was in a “holding pattern” as a new administration and new police chief took over.

Greenberg, the incoming mayor, said he will work to address the conflict between the Office of the Inspector General and LMPD as well.

“More transparency and accountability within LMPD are critically important as we look to continue rebuilding trust between the department and the entire community it serves,” said Greenberg in a statement to LEO. “The Inspector General and his team play a big role in delivering transparency and accountability for the people of Louisville. My team and I look forward to improving cooperation between the department and Mr. Harness.”