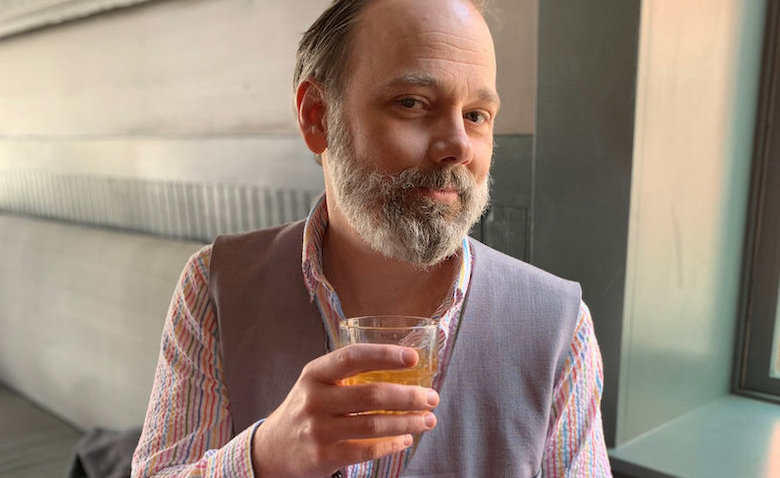 Andy Matter, aka Andy Washburn, is a man who does things his own way. He’s also a man who is always looking for new ways to do them. As with everything and everyone, the pandemic lockdown forced us all to readjust our lives and routines, but for Washburn, it was a chance to shake up his usual equation. Taking lemons and making the proverbial lemonade, Washburn designed a new music-making routine which led not only to “Bloodbuilder,” but a whole slew of songs that would eventually form his 2021 album, Lounge.

“For me, ‘Bloodbuilder’ serves as a milestone of when I began to feel comfortable in a new method of delivering a familiar sound,” said Washburn. “COVID-19 provided me a rare opportunity to perform office duties and record my music in the same basement within minutes of one another, and so I would record as soon as I had clocked out — a loop pedal for a band and an 8-track and a laptop for a studio.”

“Bloodbuilder” is soaked in nuanced dissonance, flecked with touches of early ‘90s indie rock with its revelation in sharp, glass-shattering guitar noise, and would fit right at home in a psychedelic noir mystery movie. And while, in the past, Washburn has generally favored singing on his music, on “Bloodbuilder” (and the rest of Lounge) he decided it was time to instead let the music do the talking.

“I was just dipping my toes in the waters of instrumental music, having freed myself of the ballast of vocals and lyrics. Does a 40-something Caucasian dude with an electric guitar really have anything new to say anyway? And it turns out I give myself more creative license with titles without having a forced refrain tied to it. This one is named after a vitamin supplement my wife and I discovered. It’s a fun, loose, shuffle in an E chord ad nauseam. It can go three minutes; it can go 13. It opens itself up to any accompaniment I want.”

While most artists generally look to the actual lyrics or the meaning/message in their songs when naming them, Washburn took another, more imaginative route.

“For years, my wife and I have collected imagined song titles and artists’ names in a paperback notebook we keep in our living room. This is the first and, so far, only instance of my having raided the book for a title, with her blessing, of course. My apologies to Imagination Station, the artist we had originally tacked the song ‘Bloodbuilder’ to.”