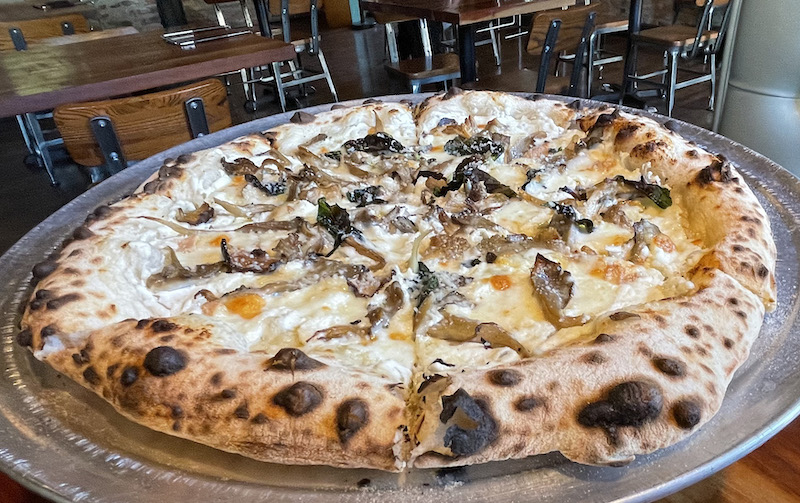 "Funghi" is Italian for "mushroom," and Lupo's funghi pizza is loaded with fancy specimens from local Frondosa Farms, along with four Italian cheeses. | Photo by Robin Garr.

I did a quick double-take when I heard that Pizza Lupo had won “Best Pizza” honors in LEO Weekly’s Readers’ Choice awards.

Not that it isn’t worthy. Lupo’s wood-fired, leopard-spotted pies with their quality toppings are a go-to for me whenever I have pizza in mind. After all, “Pizza” is the restaurant’s first name.

What’s more, one of the first things you see when you enter the charming dining room of this renovated 160-year-old red-brick Butchertown building is a towering stack of takeout pizza boxes.

But in contrast with many of the region’s other top pizza spots, Lupo offers much more. It’s a top-tier pizzeria. And it’s a splendid Italian/international eatery with an impressive kitchen and, by the way, an exceptional bar. It’s a winning combination, and it makes Lupo one of my favorite restaurants.

I didn’t even go with pizza in mind the other day. Nope. Lupo’s Facebook Page nabbed me with its post:  “Colder weather brings richer dishes back to Lupo. Gnocchi parisienne in taleggio cream with sage from our garden and roasted pepitas.”

Can you say “yum,” boys and girls? I thought you could. So we came for the gnocchi, but of course we got pizza, too: Not just any random pizza but a beautiful Neapolitan-style pie loaded with local mushrooms and fine Italian cheeses.

Lupo’s menu doesn’t go on for pages. It’s a simple sheet with food on one side and an impressive selection of reasonably priced artisanal beverages on the other. Rest assured, two pages allow plenty of room for a selection of excellent choices.

On the food side, the first column offers eight wood-fired sourdough pizza options. These 16-inch pies range in price from $21 (for a classic margherita or vegan marina made with soleggiati sun-dried and milled organic tomatoes) to $26 (for a cheese-stuffed pizza fiore, available only Mondays through Thursdays). Add cheese, meat or veggie toppings from an extensive list for $1 to $6 each.

Column Two, titled “From the Kitchen,” adds a choice of ten items including entrees, small plates and a single artisanal gelato dessert ($7), ranging in price from $6 (for a plate of Castelvetrano olives with house-made fennel pollen togarashi spice) to $20 (for a seasonal gnocchi dish or spaghetti and meatballs made with 3D Valley Farm beef).

The gnocchi parisienne ($20) came out in an attractive, high-sided blue-gray dish, and for a minute there I thought they’d made a mistake and brought us scallops instead. Fourteen inch-wide rounds, thick and flattened and browned on top, were dead ringers for perfect bay scallops right off the day boat.

They were the real thing, though, like little silken no-meat scallops. Gnocchi parisienne are made not from the traditional potato-flour mix but from pâte à choux, the feather-light dough that’s used for cream puffs and éclairs, most likely poached, then seared. They were so light that it seemed they could have lofted up to the clouds, but their rich and aromatic cheese sauce kept them safely tethered to Mother Earth.

The gnocchi and earthy Northern Italian taleggio cheese sauce worked together with crunchy pepitas and crisply fried sage leaves to yield a dish that was subtle, creamy and filling. You really could not pick out one single dominant flavor from an orchestral chorus that made me want to jump up and cheer.

And then we got into the pizza, which demanded a second ovation. Normally I’m a pizza traditionalist and prefer pizzas built with the customary tomato sauce and cheese. Indeed, the last time I reviewed Pizza Lupo, not long after its 2017 opening, I went straight for the classic margherita and rated it “toward the top of Louisville’s pizza derby.”

This time, though, the lure of roasted locally grown mushrooms from Frondosa Farms in Simpsonville drew me in, along with an imposing four-cheese mix of that creamy, funky taleggio plus mozzarella, buttermilk ricotta and Parmigiano-Reggiano.

A resounding success, it was one of the best pizzas I’ve met recently. The crust didn’t offer me a distinct sourdough flavor, although you can find hints of sour scent if you pay attention. You’re given ample puffy edges that open to reveal a pure white interior with large bubbles that suggest a wet, well-cured dough. Pale-tan on the exterior, its traditional dark-char “leopard spots” reveal the work of the wood-fired oven.

The mushrooms — oyster mushrooms, I believe — were earthy, in a good way, and sang the melody line of this culinary chorus. The combination of cheeses worked nicely, too, making a thick and much more fascinating topping than just plain mozzarella. Tiny amber puddles of olive oil and a few crinkly crisp basil leaves added subtle complexity.