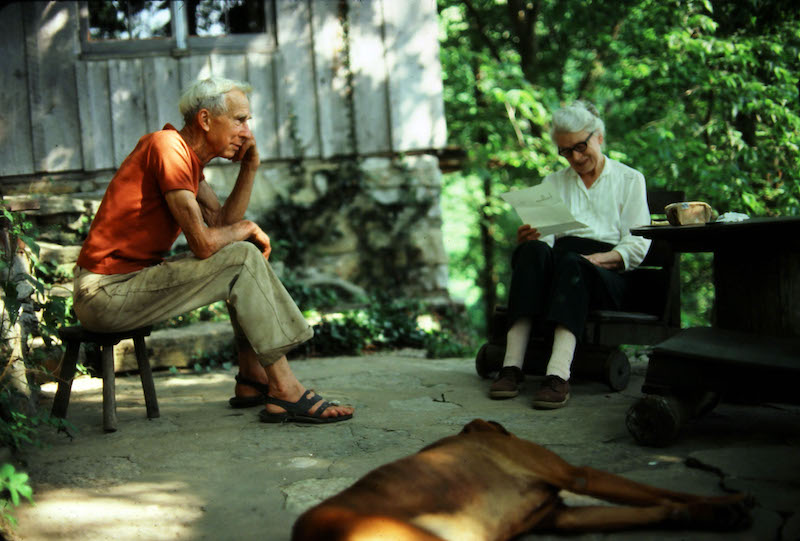 The bucolic drive on a warm autumn Sunday took a handful of University of Louisville students on an excursion to the river’s edge of Trimble County for a long hike down rugged terrain. Their class is studying the Ohio River’s environmental and cultural influence.

But the river wasn’t the primary focus. Rather, it was the land once cared for by and home of naturalist, writer and artist Harlan Hubbard and his wife Anna after its construction in 1952. She died in 1986, followed by him two years later. While they lived here, they raised much of their own food on the nearly 60 acres and played music together. In a towering studio behind the house, Harlan wrote and created paintings and woodcut drawings.

“Oh, look,” said junior Chloe Collins, once inside the stone and timber house Harlan Hubbard built in 1951. “This has been sitting out here for ages. This little beekeeper’s hat. How cute is that?”

Another student examined a pair of binoculars while one marveled at an old metal kazoo found on a shelf.

“He had a collection of annotated writings by Thoreau,” said their instructor, David Wicks, amid them in the Hubbards’ storied homestead, gesturing towards an adjoining room. Harlan was outspoken in his reverence for the work of Henry David Thoreau, and after a 1958 article in the Cincinnati Enquirer, some people began referring to Payne Hollow as “Walden on the Ohio.”

Wicks passed out snippets of Harlan Hubbard’s writings for people to read and comment upon before nearly a dozen students and other adults went to explore the property and its vegetation.

While Wicks teaches this class, he also chairs the board of directors for Payne Hollow on the Ohio, a newly formed not-for-profit that purchased this property in September for $225,000, with money it raised independently and with matching funds from the Owsley Brown II Family Foundation. Its mission is to sustainably restore, preserve and protect Kentucky’s historic Payne Hollow.

The organization purchased it from Paul Hassfurder, a dear friend of the Hubbards and fellow artist, to whom they bequeathed the property. Hassfurder had lived there and welcomed visitors. But for several years, serious health issues kept him from living or even visiting Payne Hollow, said Britton Patrick Morgan, Hassfurder’s friend assigned power of attorney.

“I know Paul is very grateful that the right group of people came together and put in so much hard work to make sure the Hollow actually has a future,” Morgan said.

The group secured the property in June with $5000 while the board members and advisors raised the money to purchase it and organize the work ahead of them. They divided that work, Wicks said, into three phases. The first was purchasing the land. The second includes cleaning, repairing, and restoring the buildings as well as collecting and cataloging artifacts.

That second phase started in July with the first of four clean-up and collection expeditions to Payne Hollow, where groups of up to a dozen or so, including board members, took pontoon boats from Hanover, Indiana, to the Kentucky shore to work.

Among them was Jessica Whitehead, a board member who chairs the artifacts and history committee. She has written “The Watercolors of Harlan Hubbard: From the Collection of Bill and Flo Caddell” and a biography, “Driftwood: Harlan Hubbard in the American Grain,” scheduled for release next year.

Whitehead described the phase as “an incredible illumination of nuts and bolts of their life at Payne Hollow.”

The group went through cupboards, drawers and boxes, enabling Whitehead to scour a collection of Harlan’s journals that Anna had transcribed, the Hubbards’ sheet music with notations as they often played music together in the evenings and various art supplies Harlan left in his studio. The latter, she said, was “the motherload.” Among them was an unobtrusive-looking wooden box with a brass nameplate.

“I was floored, because this was a portable paintbox that still had pigment in the wells and paper with marks where he had tested colors,” she said.

She, Wicks and others remarked on the clever design of the house and studio. The house, illuminated by giant windows overlooking the slope leading to the shore, had a storage place on the wall for a bed to be taken down at night, and cabinets using all possible space. He had built vents and detachable rafters that could encourage air circulation when removed during the heat of the summer. They discovered a combination of woodstoves in tactical places to keep the space warm in the winter, including one in the cellar that could radiate heat from below and boil steam.

Board member Joe Wolek appreciated that system and even the small latches that were still in good working order. “And this is after 50 to 60 years,” he said.

Another big find was Anna’s cello, which she often played with Harlan accompanying on his violin.

Whitehead is now digitizing and cataloging all the finds and will index and transcribe texts, such as letters, to make them accessible to researchers and others who want to know about this couple’s life.

As winter approaches, the cleaning and repairing of the house and studio roofs and small holes where rodents could enter are done, and the group is now turning to bigger tasks that include a more comprehensive restoration plan. There is a goal to list Payne Hollow on the National Register of Historic Places and define future uses. They are considering how Payne Hollow could serve as a cultural and scientific field station and provide opportunities for interdisciplinary research, similar to Bernheim Arboretum and Research Forest, and host residencies for artists and writers, like the Fort Thomas Forest Conservancy across the river from Cincinnati that includes Hubbard’s studio before he married.

Reinforcing all these ideas and activities would be furthering the Hubbards’ legacy. It’s something longtime Hubbard friends regard as meaningful in today’s world.

Among them is Wendell Berry, who donated to Payne Hollow on the Ohio and whose own legacy and values of equitable and ecological farming are championed by The Berry Center, founded by his daughter, Mary, just 30 miles south in New Castle. The Center’s operations director, Ben Aguilar, said they are “excited at the prospect of more people coming to this part of Kentucky and seeing both the beauty of the Ohio River Valley and the degradation that it is facing.”

Canida, who met the couple at a local hardware store in Madison, Indiana, in the early 1970s when he was 23, said there is so much to learn from them. He and his wife even eschewed owning a television while raising their children due to their influence.

“We can live simpler lives than what our society is promoting,” Candia said. “We can be a bit quieter and more reflective. We can use less of the resources around us. We can be kind and gentle people. And we can have a rich lifestyle without the glitz and glamor.” •