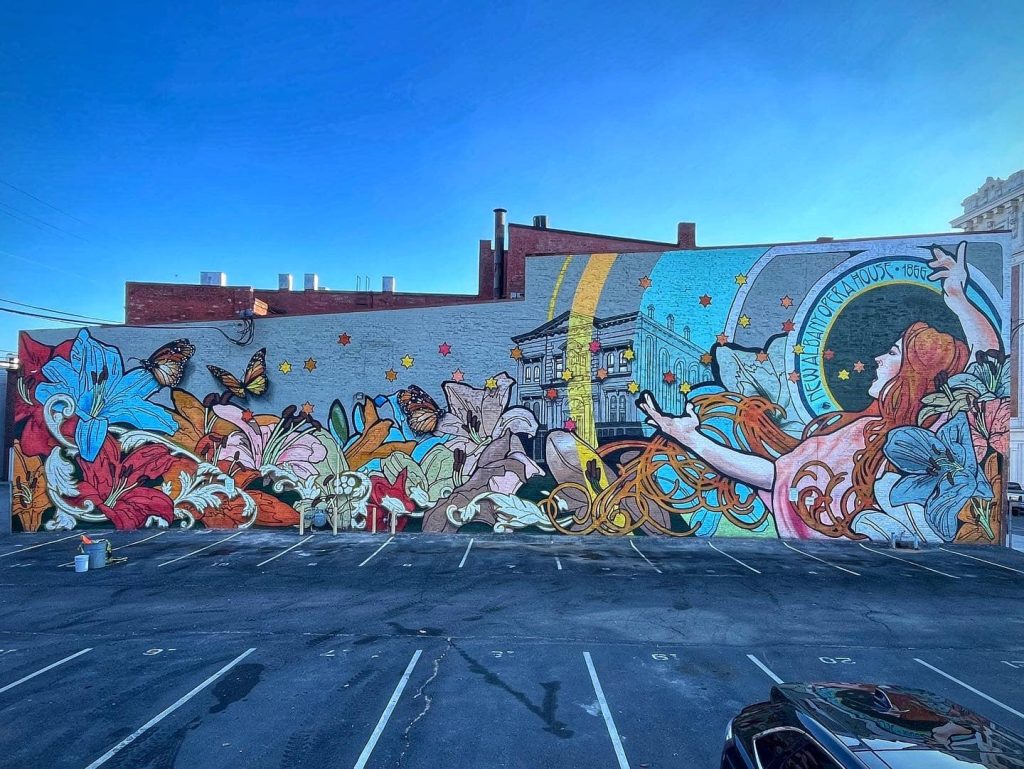 New Albany has a new mural and the design is museum worthy. It’s a nod to the Art Nouveau with a large Mucha-esque design commemorating the New Albany Opera House built in 1866. The mural done by artist Carrie Johns covers 3,700 Square Feet of the old building which stands at only half its original height due to fire damage from sometime around 1939.

“Last December, the building owner approached me about painting a mural,” Johns told LEO. “He knew of me because I’ve painted a lot in the New Albany area. After a busy spring/summer, I was finally able to begin the design process at the beginning of Fall this year, and was given the green light to begin November 1st. I finished the day after Thanksgiving.”

What is left of the building is no longer used for an opera house but when it was, some of the best talents of the 19th century came through the doors. It was at the time, a grand place with patrons coming by train and ferry from Jeffersonville and Louisville. The mural has drawn great praise from the community and often crowds watching Johns work or marveling at the mural.

Notes on the original building’s interior were recorded in the New Albany Ledger in 1866 and shared on the now defunct Our History New Albany blog in 2005 :

“The hall is on the second floor and is reached by a broad flight of steps of easy ascent. At the foot of the stairs on the north side is the ticket office, a neat and nicely organized room. Immediately at the head of the stairs is the entrance to the dress circle and parquette: while a flight of broad stairs on the right and left lead respectively to the family circle and gallery.”

I’m not as familiar with theater terms as I should be:

“The dress circle and parquette are most elegantly and elaborately finished. They are supplied with spring cushion seats, covered in red damask, with green damask and stuffed backs. The seats in the dress circle are of the same kind of material. The parquette or orchestra boxes are separated from the dress circle by a beautiful iron railing in semi-circle form. The brackets that ornament the gas burners form a really magnificent ornament to the front and sides of the circle. A larger number of brackets add to the elegance of other parts of the house. The house was lighted by 150 gas burners.”

Johns mural honors that history and the grandness of the old opera house. The artist has done many murals throughout New Albany including the “Welcome to New Albany” mural on the face of the Ronaldo Jewelry store at the foot of Exit 0 in New Albany. Their work can be found on Instagram and FB under: @carriejohnsart and the artist can be reached via email at [email protected]