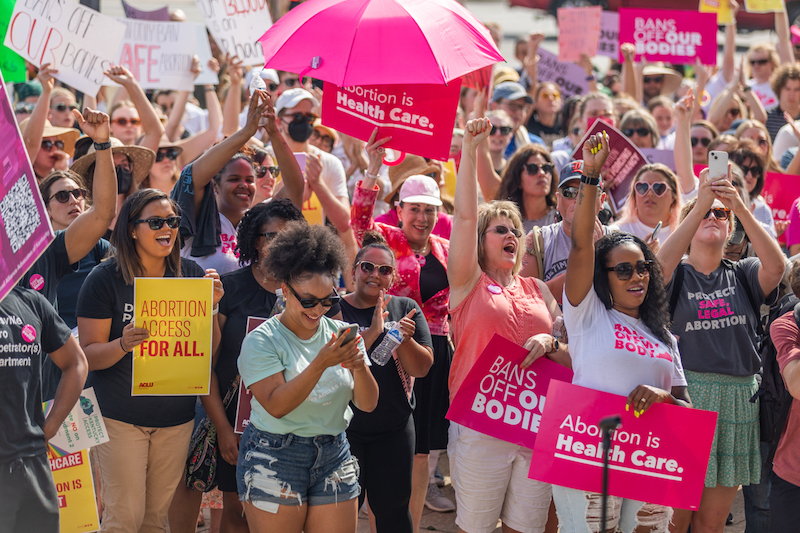 In a major victory for abortion rights in Kentucky, voters on Tuesday rejected a ballot measure that would have introduced language into the state’s constitution saying that nothing in the document secured or protected abortion rights.

Abortion remains illegal in Kentucky as the result of a “trigger” law banning abortion in the wake of the monumental overturn of Roe v. Wade in June. However, the failure of the ballot measure to pass means that Kentucky’s abortion ban can still be challenged as unconstitutional in the courts.

“This is a victory for bodily autonomy and the right of all Kentuckians to make the best decision for themselves, but the fight is not over,” said Amber Duke, the interim executive director for the ACLU of Kentucky, in a statement. “We will now continue our fight in state court and restore abortion access in the Commonwealth.”

While Kentucky’s statewide senate race went so decidedly in favor of Republican incumbent Rand Paul that the Associated Press called the race 14 minutes after Kentucky polls closed, the abortion ballot question continued to hang in the balance throughout the night, indicating a potential chasm between the the GOP and its voters over an issue Kentucky Republicans pushed hard.

The ACLU of Kentucky declared victory shortly before midnight; The Associated Press would follow suit after the sun came up in Louisville on Wednesday.

According to a tally on the Washington Post’s website on Wednesday morning, 52.6% of Kentucky voters voted against the ballot measure while 47.4% voted in favor, with an estimated 86% of the vote counted as of 8:52 a.m.

The Yes for Life KY Alliance, which supported the amendment, said in a statement Wednesday morning they were “devastated that radical, out-of-state activists spent millions of dollars to confuse Kentuckians about the Yes for Life Amendment.”

In the run-up to Tuesday’s vote, anti-abortion Republicans, including Kentucky Attorney General Daniel Cameron, characterized warnings that the ballot question was about banning abortion as “misinformation.”

An Oct. 21 advisory from Cameron’s office said that the amendment did not ban abortion, adding: “Adding the language of Amendment #2 to the Kentucky Constitution simply means that decisions on regulating abortion will be made by the elected representatives of the General Assembly.”

In a tweet on Monday, Cameron said: “Voting YES on Amendment 2 would not ban abortion in KY. And current law includes exceptions that protect women.”

This ad contains misinformation. Voting YES on Amendment 2 would not ban abortion in KY. And current law includes exceptions that protect women. Last month, we released an advisory explaining the scope & effect of the amendment.

Under Kentucky’s abortion ban, the procedures are only permitted if the life of a pregnant person is in jeopardy. There are no exceptions in cases of rape or incest, nor are there exceptions for minors. Healthcare providers who carry out abortions or people who provide abortion medication can be charged with a Class D felony in Kentucky, which is punishable by up to five years in prison.

At least one highway billboard in Louisville made the amendment out to be about saving taxpayer dollars.

The victory in Kentucky comes after Kansas voters rejected a similar ballot measure in their state in August. Like Kentucky, Kansas is a deeply red state that, in the end, saw voters rally behind abortion rights in the fallout of Roe v. Wade.

Ahead of the vote in Kansas, there were similar attempts to muddy the water, with some in favor of a constitutional amendment saying there was no right to abortion trying to argue that such a measure could actually help abortion rights.

Elsewhere in the country, voters in Michigan, Vermont and California all voted in favor of installing protections for abortion rights in their state constitutions on Tuesday.