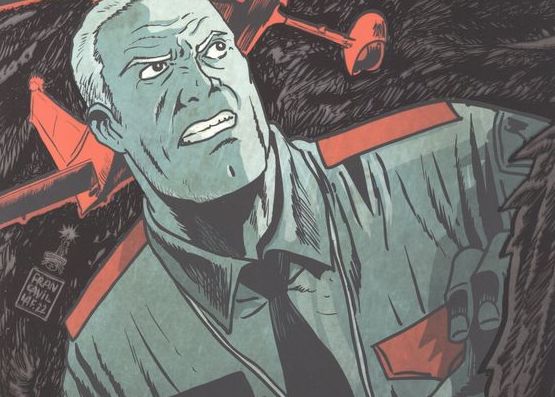 Cover art of "The Approach."

“The Approach” #1
Written by Jeremy Haun and Jason A. Hurley
Art by Jesús Hervás
From “The Shining” to “The Terror,” there is an element of horror to being isolated by, and attempting to survive, the freezing cold. Boom Studio’s “The Approach” is just another addition to the trend of exploring just what can go wrong when your only option is to wait and see.

Mac and Abigail are airport employees tasked with clearing the runway to accommodate a flight diverted by a sudden blizzard. Just as they’re making sure the passengers are settled into their lodgings within the terminal, a second plane emerges from the storm and slams into the runway. Not only does the lone survivor have something inhuman about him, the plane they pulled him from had disappeared 27 years earlier. And that’s just the tip of the iceberg for those trapped by the unrelenting storm.

If watching a group of sitting ducks get hunted down by a parasitic lifeform in “The Thing” was right up your alley, then so is “The Approach.” As each page reveals how dire their situation is, there is the eerie disquiet of not knowing just what all is hiding behind the mysterious series of events. As we begin to head into winter, you might want to grab this off the stands for a seasonal scare.

“Dark Ride” #1
Written by Joshua Williamson
Art by Andrei Bressan
Love or hate Disney? Love or hate amusement parks? Then this is the story for you. Arthur works at an amusement park, but dreams about being an Imagineer. His dreams aren’t about fairy tales or talking animals, though. He loves all things scary, and he believes he and others like him would love to have a place to go to get scared for fun.  His bosses, though, don’t feel the same and Arthur gets fired.

What happens next sets Arthur on a path to the realization of his dream.  His park has Murder Mountain, Werewolf Woods, Vampire Village, Zombie Zone and many other spooky attractions. But, after years, it’s all getting a little stale for Arthur and his paying customers. The park is falling on hard times. Arthur needs the excitement again, for his family and his finances as well as for himself. Then, we meet Owen. He’s like a young Arthur.  He loves everything about the park, and his excitement about working there makes his coworkers roll their eyes. At the end of his first day, Owen gets pranked by them. Or does he? What exactly is happening on the Dark Ride? What is Arthur willing to do to fix things?  I can’t wait to see where the ride takes us in Issue #2!