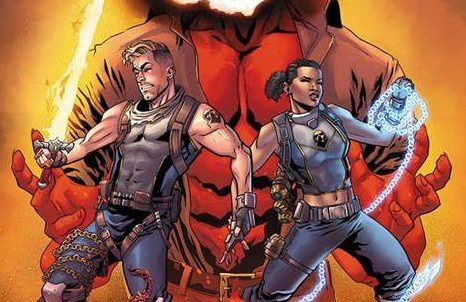 Hell to Pay #1
Hell To Pay #1
Written by Charles Soule
Art by Will Sliney
“Hell to Pay” starts out like a lot of stories: a beautiful woman and a very rich man are playing a game of cat and mouse. It’s going to take more than money and a castle in Ireland to impress her, so he shows her more and more of his collection of artifacts. Eventually, he gets to his last, best offering. He tells her that hell is real. Not real like, in some hidden mythological place, but real as in his basement.
Outside the castle, a man uses a flaming sword to take down the rich man’s security guards and make his way inside to join his wife. Neither are surprised to find the place is full of tortured souls and demons.
That’s as far as I’ll go in spoiling the story. In flashbacks we see how and why the pair got to this place. An organization called the Shrouded College also makes their debut in this intriguing story.
The creators of the book plan to do seven different 6-issue series’ featuring the mysterious “Shrouded College” telling the “tale of a supernatural Cold War.” Hopefully, they’ll all be as good as the first issue of “Hell to Pay”.