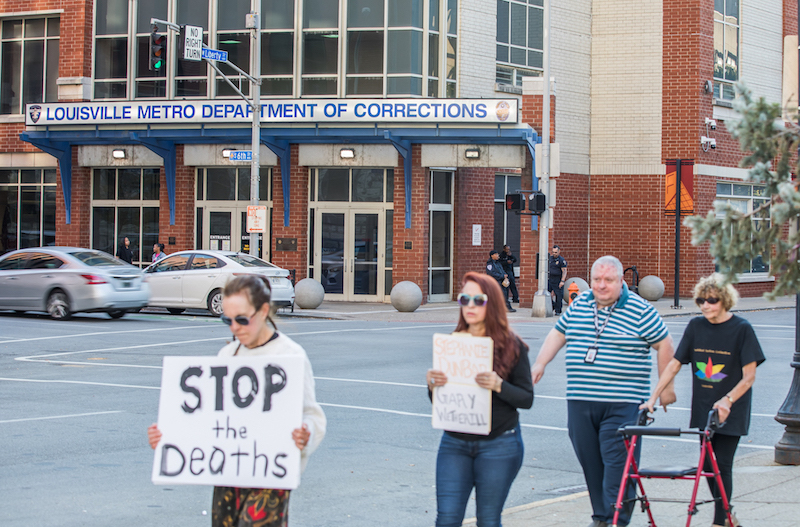 Activists walk in front of Louisville’s jail during a vigil for the 12 incarcerated people who have died in the custody of Metro Corrections over the past year. Photo by Kathryn Harrington.

A former FBI agent hired by Metro Council earlier this year to conduct a review of recent in-custody deaths at the Louisville Metro Department of Corrections said this week that without constructing a new jail, Metro Corrections is risking a costly Department of Justice consent decree.

“I equate it to somebody driving a car with 280,000 miles on it. And for the past ten years you’ve been fixing this and fixing that. At what point do you stop putting money into a pit or into a car that’s ready to die?” said attorney and former FBI agent David Beyer on Tuesday at a Metro Council Government Oversight and Audit Committee.

Building a new jail is expensive, he said, but is likely cheaper than the costs of a court-mandated consent decree.

Beyer’s comments came as the Louisville Metro Police Department awaits the findings of a wide-ranging DOJ pattern-or-practice probe that is widely expected to result in the force entering its own expensive consent decree.

His comments also came after Louisville’s jail has seen 12 people die in its custody since Nov. 29 of last year.

Data presented at Tuesday’s Metro Council committee meeting showed that 19 people had died of overdoses and suicides in between 2005 and 2020. Of the 12 deaths within the past year, city officials have said all but two were caused by suicides or overdoses.

A modern facility where officers could more easily observe incarcerated people could have potentially prevented some of those 12 deaths, Beyer said.

In a presentation billed as an update on his investigation into the jail, Beyer described LMDC as an outdated, “dark, dingy” and “woefully inadequate” facility where, due to a lack of sight lines, officers are often unable to see what is going on. Further, he highlighted potential security gaps that could allow the smuggling of drugs, officer positions that could be filled by civilians and ways officers could better ensure the safety of prisoners. Many of his points echoed those raised in a recent report by former Ada County, Idaho Sheriff Gary Raney, who was hired by the city to conduct a review of the jail earlier this year.

“We talk about being a kind and compassionate city,” said Beyer, referencing a phrase frequently invoked by outgoing Louisville Mayor Greg Fischer. “Yes, many of these people have committed a crime, but what we’re doing with them is not compassionate, it’s not kind. The living conditions they are in are deplorable.”

Showing pictures to the committee from his tours of the facility, Beyer likened some parts of the jail that lack natural light to a dungeon.

Since taking over leadership of the jail in April, LMDC Director Jerry Collins has instituted a number of policy reforms and safety improvements in the jail aimed at combatting inmate suicides and drug overdoses. Beyer commended those actions, saying that since taking over, Collins had implemented “many changes that should have done years ago” and “dramatically” increased the morale of officers. However, Beyer also compared the improvements at the jail to a “game of whack-a-mole” with new problems popping up and deep-seated issues at Metro Corrections that could not easily be bandaged.

In a statement to LEO Weekly, LMDC spokesperson Maj. Darrell Goodlett said: Director Collins and Metro Corrections leadership have worked closely with Mr. Beyer to promote transparency and a spirit of cooperation. We appreciate all of Mr. Beyer’s suggestions and insights and will take a comprehensive view when his final report is complete.”

Like Beyer, LMDC Director Collins has been calling for the building of a new jail, saying that officers are limited by the antiquated design of the current facility.

The union that represents Metro Corrections officers has highlighted chronic staffing shortages as as a contributor to unsafe conditions in the jail. Beyer, however, said there are some officers currently tasked with jobs in the jail that, if handled by a civilian, would be more cost effective, more efficient and free up officers to supervise those incarcerated within the facility.

The jail’s maintenance department, Beyer said, was staffed by officers who lacked the skills to do the work and were assigned to the department based on seniority. Instead of doing maintenance work themselves, he said, they monitored outside contractors hired by the jail to do maintenance work.

“In my opinion, that’s a waste of time, resources and skill sets,” said Beyer.

Other senior officers in supervisory roles, he said, were doing basic data entry on spreadsheets as part of their jobs.

The result of having an officer man the metal detector and x-ray machine at the jail’s front door — where staff and visitors enter – was a “lackadaisical atmosphere” where people who know the officer on duty were not searched or scrutinized.

Beyer said that was different from federal buildings he had experience in, where civilian contractors worked the entrances.

“The beauty of that is those are private individuals that don’t work with the other corrections officers, so you don’t get this feeling of ‘hey that’s my buddy, I’m going to send him on through,’” he said. “At the FBI, I’m telling you the people that guarded our building and worked the magnetometer, they looked at you very carefully, made you empty your pockets. They didn’t care who you were, how high up in the organization you were. They held you accountable to ensure there was nothing getting into the facility that shouldn’t.”

And while the jail says it has one entry point for officers, Beyer warned that officers frequently take smoke breaks out of other doors where they are not checked on re-entry, providing ample opportunities for them to be passed contraband and introduce it to the facility.

As a result of the staff shortage, LMDC frequently turns to overtime work — including forced overtime — which has cost the city tens of millions of dollars in recent years.

“That money could be used to hire employees, it could be used for a lot of things. We need to reassess how we’re doing overtime,” said Beyer.

The COVID-19 pandemic that began more than two years ago caused officers to take a hands-off approach to those incarcerated at LMDC, Beyer said, ultimately leading to some of the jail’s current problems.

“Corrections 101 ceased functioning here at the jail. Meaning, that corrections officers didn’t go into the jail facilities, didn’t interface with the inmates and neglected a lot of the basic things to keep a jail safe,” he said.

That way of doing things, he said, has been entrenched by employees who were hired during the pandemic who have only ever operated that way.

Beyer applauded plans by Metro Corrections to eventually install video cameras in every single-person cell, but pointed out that, currently, officers in control rooms are only able to view 30 to 40 cameras at a time, despite already being responsible for 100 cameras.

“We can stick as many cameras in this facility as we want, but if they’re not being monitored, what good are they?” said Beyer.

Additionally, he said during one of his visits, a dorm cell door was unlocked when an officer escorting him checked it and on visits to control rooms, red lights indicating whether a door was locked or unlocked were frequently flashing. (He said officers brushed off the flashing lights, suggesting to him that perhaps an incarcerated person had bumped into the door).

Despite calls for a new jail, neither mayoral candidate has committed to building a new facility, with Democrat Craig Greenberg saying a new jail would not be a priority for his administration and Republican Bill Dieruf saying that while a new jail may not be necessary, significant work needs to be done to improve LMDC’s current facility.

Jail reform activists in Louisville have been vocal about their opposition to a new jail, fearing that a new facility would put greater pressure on the criminal justice system to fill the jail.

While he updated Metro Council members on his investigation on Tuesday, Beyer said he was still working on his final report and was planning on speaking with incarcerated men and women at the jail later in the week.