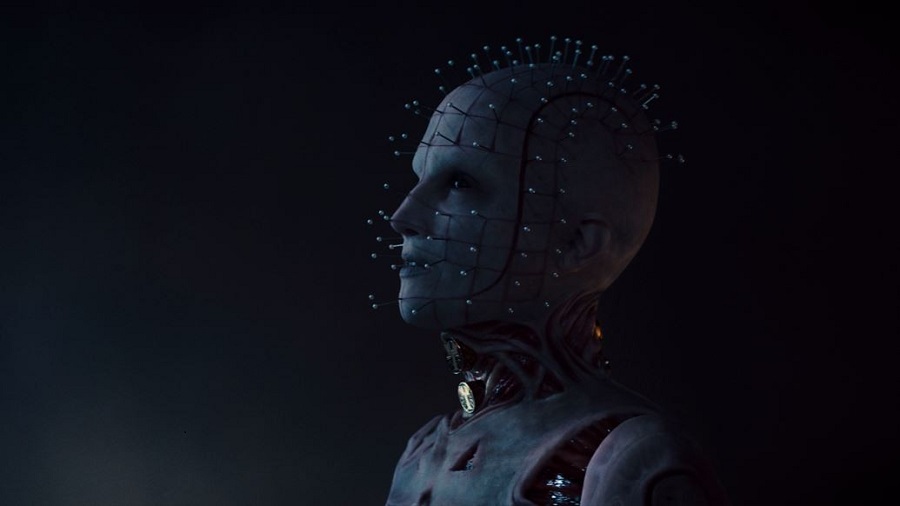 Here we are, two weeks away from Halloween, the most wonderful season of the year, and thankfully for horror fans, there are a slew of new films and television shows to absorb and champion.

In this digital streaming age of unlimited, unrivaled content, it can be next to impossible to watch everything, so here are seven must-see new releases that demand your attention and one awful sequel that should never be watched by anyone.

That sound you hear is me howling in delight, still, almost a week after seeing my absolute most favorite Marvel Comics character brought to life—Jack Russell, aka Werewolf by Night, who was first introduced to readers in February 1972. I discovered him a few years later, and was instantly hooked.

While there have been some miscues throughout Phase 4 of the Marvel Cinematic Universe, along with some surprises (who knew that fully-formed and interesting characters like Kamala Khan and Jennifer Walters would expose the dark misogyny of comics fans AND crush the trolls by breaking the fourth wall to address the hate), I think it’s fair to say that the MCU’s Halloween special, a black and white stand-alone “Werewolf by Night” story, is among the best that the studio has ever offered.

First-time director Michael Giacchino and writers Heather Quinn and Peter Cameron clearly love the classic Universal Monsters, and that admiration and inspiration informs every frame, from the Easter-egg packed opening sequence and introduction of the Bloodstone clan to the instantly iconic debut of another classic Marvel monster, Man-Thing, aka Dr. Theodore Sallis, or just Ted, as he’s called here.

Everything works. Even the practical special effects, including the design of the titular lycanthrope, pay homage to the source material, while still branching off into new directions. But the real win for fans is Man-Thing. Not since Groot has the MCU found a way to make a relatively obscure comics character that isn’t part of the pop culture nexus so instantly beloved. I cannot wait to see more of both Jack and Ted.

Forgive me for sounding as if Christmas has come early, but not only are we getting to witness the MCU go full horror, but we’ve also been gifted with the best entry in the “Hellraiser: franchise since 1996.

That this is the best film since “Hellraiser: Bloodline” shouldn’t be surprising given that David Bruckner (“The Night House”) is at the helm. Bruckner has a gift, the way his camera eye focuses on certain things while so much is happening in the background, which is what makes the opening sequence so impressive.

Look, I get it, there’s been a lot of rumbling online even before this new iteration was released. My wife and I, we met because of a shared love for Clive Barker. We cherish this franchise. And at the end of the day, this is what should matter most: For the first time in more than 25 years, someone who is making a new “Hellraiser” movie actually cares about getting it right, about crafting something new and memorable, something beautifully grotesque and pricked with pain.

As for new, the cenobites, in particular, are inspired, both in their designs and their personalities, which thankfully shine through, none more so than Jamie Clayton as The Priest, aka Pinhead. Bonus points for the film waiting more than an hour to reveal her in all her glory.

Trigger warning, y’all. Watching “Sissy,” the new situational slasher film, about a social media influencer, Cecilia (Aisha Dee), who has seemingly conquered the demons from her past, may cause a sudden urge to exact revenge on anyone who has ever made you feel less than whole, especially fake-ass people who spend their 24/7 lives online tearing others down and basking in fake validation from followers they’ll never meet.

A lot of recent films have explored the sociopathic tendencies of people who buy into social media as a true barometer of their self-worth, but “Sissy” operates on an entirely different level. Yes, Cecilia likely should be institutionalized, but everyone who is harmed throughout the course of the movie honestly gets what they deserve because they all target Cecilia to a degree that their bullying should awaken a demon deep inside.

Apparently, the downtime reinvigorated Lewis as he has come roaring back less than a year later with an even better supernatural gorefest that a lot of people might pass over, if only because of its too-generic title.

“The Accursed” opens strong and never stumbles, which is a definite improvement over “Willy’s,” which flirted with greatness but never found the open lane it needed to take off. There are several unexpected swerves, a number of solid plot developments that actually pay off and one of the best jump-scare deaths since the “Final Destination” franchise.

And don’t even get me started on the ending, which is a blast of pure WTF madness captured in a bottle, pressurized and then uncorked for maximum brain melt.

Shawn Ruddy (Joseph Winter) is a self-described coward who uses social media to face his fears online through his streaming show, Wrath of Shawn, until a prank goes wrong and he gets #canceled.

Months later, attempting a comeback, Shawn decides it’s time to face his greatest fear—ghosts—by agreeing to spend the night in a haunted house and investigating every weird noise that he hears. “I hate that stuff,” he tells his viewers. “I haven’t seen a horror movie since the first half of ‘Ghost Dad.’”

As fully formed characters go, Winter’s Shawn is completely believable. He even has merch, including a unique mixtape that is available on iTunes. And so he sets out for a remote estate he calls Death Manor, which was built in the late 1800s by a Mormon pioneer, and that is documented to have been plagued by a rash of deaths, most notably Mildred, a young woman who lived in the house for eight years before hanging herself in the stairwell.

As co-written and co-directed with his wife, Vanessa, their creation, “Deadstream,” toggles fluidly between an escalating series of paranormal encounters that bedevil Shawn and the merciless trolls who are watching his live-stream and making brutal observations, such as calling his show “Wrath of Yawn.”

If you are a fan of “The Evil Dead,” or someone who appreciates when content creators utilize every possible DIY tool in the toolbox to maximum impact, you will not be disappointed by this incredibly original, wholly enjoyable horror-comedy that is as unrelenting as it is satisfying.

Mona Lisa and the Blood Moon

Anytime a young director introduces a vision so pure and original that it becomes part of the pop culture zeitgeist, there is the inevitable fear of a huge letdown to follow.

Such was the case with Ana Lily Amirpour, whose 2014 feature debut, “A Girl Walks Home Alone at Night,” an atmospheric black-and-white vampire opus, wowed critics and fans alike. Two years later, when she followed that up with “The Bad Batch,” not even Jason Momoa and dystopian cannibals could put butts in seats to watch.

Six years later, and Amirpour is back with “Mona Lisa and the Blood Moon,” a decidedly more low-key adventure that still manages to enthrall, even if it is much more focused on the journey than the destination.

Mona Lee (Jeon Jong-seo) is trapped in a psychiatric facility for reasons that aren’t exactly clear, but viewers quickly discover that she possesses some serious mental skills reminiscent of “Scanners” and “The Mind’s Eye.” After escaping, she sets course for New Orleans, but first runs into Fuzz (Ed Skrein, fully committed), a goofy but adorable drug dealer who only wants a kiss. Once in NOLA, Mona runs into a detective (Craig Robinson) whom she mind controls and a stripper (Kate Hudson) who tries to harness Mona’s powers to get rich quick.

While nowhere nearly as profound or moving as “A Girl Walks Home…,” this third feature from Amirpour quickly reminds you of her singular gifts as a visual storyteller. “Mona Lisa and the Blood Moon” might feel slight, but it still an enjoyable slice of female empowerment from a visionary who clearly has a lot more gas left in her tank.

“The Unburied,” a supernatural family drama from Argentina, starts out weird, like really weird, with awkward characters, deep secrets and foreign customs, and that’s well before Maximiliano (Demián Salomón), an author, psychiatrist and orphan, must travel home to pay respects when his foster father suddenly dies.

Once back in Buenos Aires, Maxi, as he’s known, navigates an uncomfortable reunion with his foster ‘brothers,’ which awakens many repressed memories of moments from his childhood, memories that become more real as Maxi learns of a pact struck between his ‘father’ and his ‘siblings’ who have pledged to keep his body out of the ground long enough for a new patriarch to be anointed.

“Life is not an easy thing,” one of them says to Maxi, “but neither is death.”

Eventually, the cascading pain of past traumas awakened collides with the threat and promise of a sacred ritual to be performed. “The Unburied” is a surreal dissection of grief and fealty that shows the lengths these men will go to appease a horrible human who mentally and sexually abused them for decades.

And finally, just because they can’t all be winners, I’d like to take just a minute (because it deserves no more than that) to properly piss all over the fourth installment in this franchise, “Jeepers Creepers Reborn.”

Way back in 2001 when this series began, before its creator and original writer/director Victor Salva became known more for being a registered sexual offender, “Jeepers Creepers” was actually a well-regarded original horror movie with an instantly iconic creature.

It makes sense that in trying to revive the franchise, a new director would be required, and the person picked, Timo Vuorensola, is an inspired choice, particularly since he gifted fans with “Iron Sky,” the Nazis on the dark side of the moon B-movie blast. Sadly, though, Vuorensola is in way over his head here, along with the entire cast, the special effects designers and everybody else associated with the movie.

Nothing works. The updated makeup design for the Creeper is borderline racially offensive. The script by Sean-Michael Argo is exactly what you would expect from the author who penned “Voodoo Cowboys” and “Sineaters.” Hell, even a cameo by the incomparable Dee Wallace falls flat. And the plot, which centers around a horror convention and a kidnapping to provide fresh victims for the Creeper, goes absolutely nowhere.

Avoid at all costs.