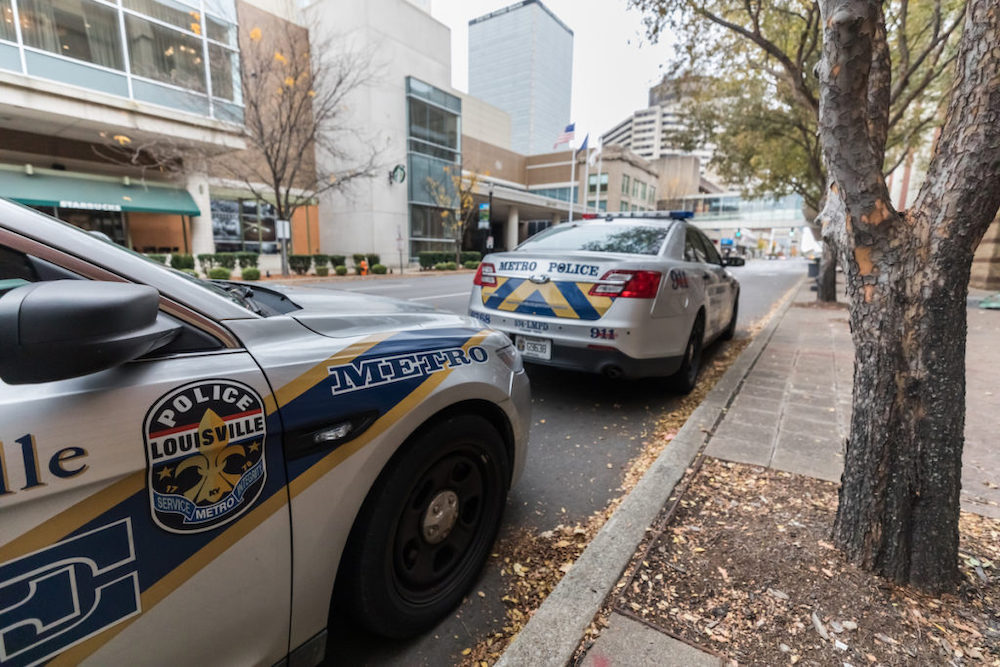 Two former Louisville police officers who repeatedly assaulted civilians by throwing beverages at them from unmarked police vehicles were sentenced to federal prison on Wednesday, with one receiving ten times the sentence of the other for his additional role in a scheme where he used police technology to help him hack and extort women with stolen sexually explicit material.

Overriding requests from both federal prosecutors and defense attorneys for lighter punishments, U.S. District Court Judge Benjamin Beaton sentenced Curt Flynn to three months in prison and Bryan Wilson to two and a half years. Both former Louisville Metro Police Department officers were also sentenced to three years of supervised release following their prison time as well as 120 hours of community service. Prosecutors had requested Flynn receive parole time while Wilson receive two years in prison in return for their guilty pleas and cooperation.

According to court records, Wilson used his law enforcement access to Accurint — a powerful data-combing software police agencies use to aid in investigations — to identify women to hack. He then would work with a hacker to extract sexually explicit photos and videos from their Snapchat accounts before contacting them to threaten to release the sensitive material to their families, friends and employers if he did not receive more.

One of Wilson’s victims who spoke in court on Wednesday said Wilson’s relentless harassment of her over the course of months led her to contemplate ending her life as Wilson’s actions “flipped my life upside down.”

Assistant U.S. Attorney David Weiser said Wilson’s victims were “strangers on the internet he pursued as if they were prey.”

Both Wilson and Flynn spoke before the court on Wednesday to apologize for their actions.

Flynn’s attorney L. Scott Miller said the drink throwing incidents Flynn and Wilson were involved in were a “high school, juvenile prank” that his client did not understand to be a crime. And in asking Judge Beaton for leniency, Flynn’s wife characterized the incidents as “a childish prank on his peers.”

In at least half a dozen videos shown by prosecutors in the courtroom, officers in vehicles could be seen throwing large take-out drinks — either the entire container or their contents — at people on the side of the road.

In one video, officers pulled up to a woman, shouted “how about a drink?” and chucked a beverage at her. In another, officers threw a beverage at a pedestrian while driving at a high rate of speed before a voice could be heard saying “dude just fell down.” Many of the videos feature uproarious laughter. One featured Flynn upset with himself for missing his throw. All of the videos, which prosecutors said were recorded on cell phones, appeared to have been shot at night.

Both men were members of the now-disbanded 9th Mobile Division — an LMPD unit that was responsible for going after crime, drugs and guns in Louisville’s Black-majority West End.

“The worst part of this case is these were some of the best of the best detectives in LMPD,” said Assistant U.S. Attorney Stephanie Zimdahl, who termed the 9th Mobile Division “elite.”

LMPD has said Wilson left the department in July 2020 and Flynn resigned in June of this year.

Zimdahl said the prosecution had collected 40 videos of misconduct in their investigation, but that those 40 videos “by no means capture the entirety of the conspiracy” as officers did not record or save recordings of everything they did.

Some examples of misconduct investigators came across— such as deliberately driving through a puddle to splash civilians — did not rise to the level of the drink-throwing incidents, Zimdahl said.

Prosecutors also said that Flynn and Wilson used their status as police officers to obtain the drinks they threw at people for free from local businesses.

Asked whether charges were coming on others involved in “Slushygate,” Zimdahl said she believed “other individuals will be subject to other remedies,” but said she could not comment on whether charges were coming or if they would face other discipline. LMPD has said it is investigating the extent to which other officers may have been involved. Federal prosecutors have said others were involved and that Flynn and Wilson shared videos of their attacks with fellow officers.

“These horrible incidents are something I did and not who I am,” said Flynn ahead of his sentencing, adding that he’s dedicated his “entire life” to public service and had won “countless” officer of the month awards. Flynn’s wife highlighted his long career on the police force and in the military, saying he always looked to inspire hope in those he had arrested and provide an example of a positive male role model during their drives to the jail.

In Wilson’s hearing, which began shortly after Flynn’s, there was little additional mention of Slushygate as attention turned to his hacking and extortion of women.

Before sentencing, the court heard from a woman in her 20s who said she was harassed by Wilson for months on end, with him texting her every day. The woman, a school teacher, said Wilson threatened to send videos of her to her employer, prompting her to tell her principal.

“My career had just started and I felt like it was already ending because of Bryan,” she said.

At times, she contemplated suicide.

“What would have happened if he had not been caught? Would I be here?” she asked.

Later, she added that the events would leave her looking over her shoulder for the rest of her life.

Like other victims listed in court records, the woman remained anonymous.

Accurint, the law enforcement tool prosecutors say Wilson used to help target victims, can provide detailed information about a person, including their phone numbers, relatives, associates, employers as well as social media profiles associated with their email accounts. It is advertised to law enforcement agencies as a technology that can help investigators “discover non-obvious connections between people that might not otherwise be known.”

In a statement, LMPD said: “Ofc. Wilson resigned from LMPD in July 2020 and at that time his departmental IT access was terminated. However, his Accurint account was still accessible, even though all other access had been disconnected. Upon discovering this, LMPD immediately disabled the Accurint access. A review was performed, and procedures have been put in place to ensure all access is suspended once a member separates from LMPD.”

Prosecutors said he regularly called the women he was trying to extort “sluts,” “whores” and “bitches” in his messages to them.

Turning to address the victim who spoke in the courtroom, Wilson issued an apology, saying the damage he did “cannot be changed with words” and adding that “the person that I was was not the person I was raised to be.”

Wilson’s attorney, Brian Butler, said Wilson was an officer who had been abused as a child and, following his 2018 separation with his wife, turned to alcohol and pornography, a slippery slope that eventually led him to the hacking scheme. He described Wilson as being “one of the most active narcotics officers” in Louisville before he left LMPD, adding that he had an “exemplary” record apart from the incidents that brought him to the courtroom.

In addition to his prison and probation time, Wilson is also sentenced to community service and, when released, will have his computer use monitored.

“This is a really sad case. Bryan’s a good person. He made a lot of great arrests for this community. But he made some mistakes. He took absolute and complete ownership for those mistakes. It’s a hard case,” said Butler after the sentencing.