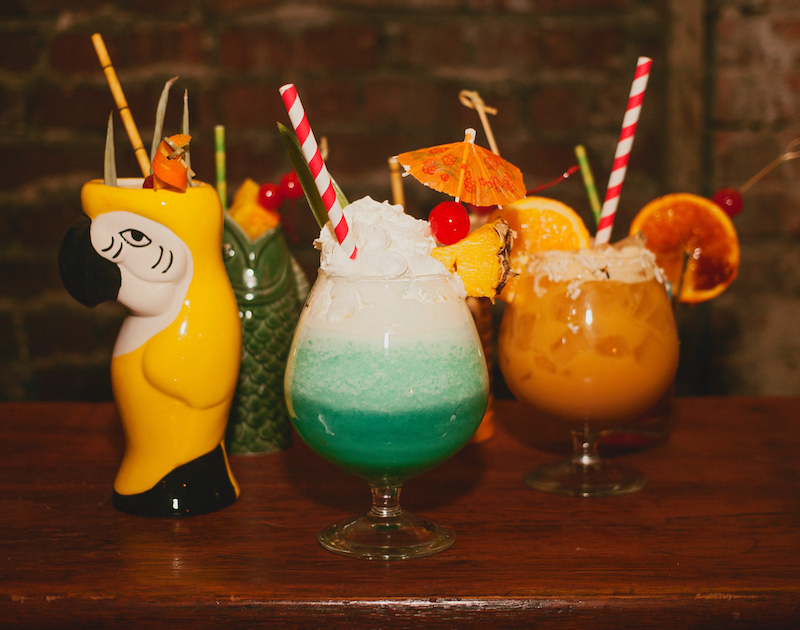 From The Limbo, left to right, a Jungle Bird , Blue Hawaiian and Painkiller. | Photo by Mary Helen Nunn.

The Limbo, a tiki bar and event venue downtown (411 W. Chestnut St.), will close this weekend.

A post shared by The Limbo, Louisville, KY (@limbotikibar)

“Thank you to all of you who have walked through our doors in the last 3+ years,” said the post. “We cannot thank you enough for your support. We’ve been humbled to serve our city. You gave this space meaning. And we’ve lived for every second of it. You’ve made a lot of dreams come true over here. It has been an amazing, glorious adventure and we couldn’t have done it without all of your love and support. We hope you’ll join us and make these last two nights special.

“Louisville, we love you.”

The bar was known for its themed seasonal decorations: “National Lampoon’s Christmas Vacation” last winter, for example, and “Moulin Rouge” this February and March. As of this writing, the bar is decorated for a pop-up theme called “3 Broomsticks,” a reference to a pub in the “Harry Potter” series.

LEO has reached out to The Limbo owner Olivia Griffin for comment, but she did not immediately respond.

Griffin wrote a guest column for LEO in January titled “Women Are The (Better) Future Of The Hospitality Industry. But Right Now, They’re Suffering.” Early this year, she made a public Facebook post (which has since been deleted) about The Limbo’s financial difficulties. At the time, she said, the business was at its lowest point financially due to a combination of snowstorms, a lack of activity downtown, and insurance premiums.

“We really rely on tourism and business travel foot traffic, and because we’re not a neighborhood bar, we don’t have those nightly 15-75 people that will pass through,” she told LEO in February. “We are still battling the issue of locals not wanting to come downtown for a variety of reasons: for COVID, because of the protests that happened [in 2020], people don’t feel safe, because of the weather. Trying to get people to come downtown who don’t live downtown or near downtown is like pulling teeth.”

The Limbo will be open tonight and Saturday from 5 p.m. to 2 a.m.