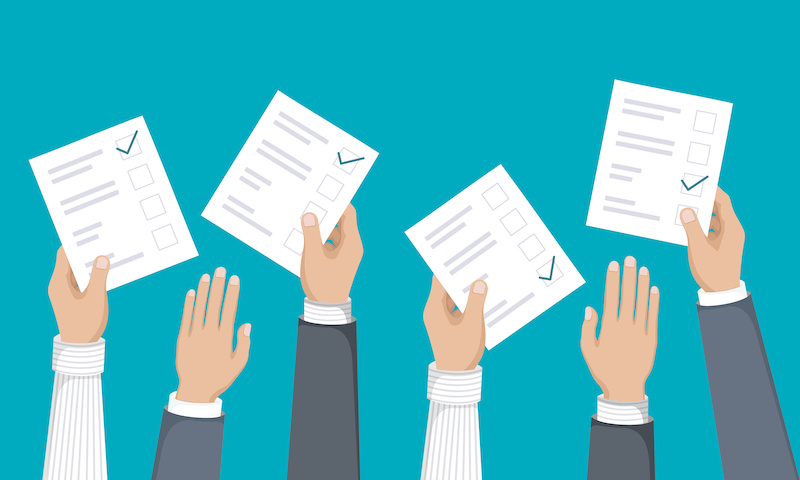 It’s easy to get overwhelmed about voting. Sure, you did some research, and you have candidates that you like, or maybe you even volunteered or organized for one or more political hopefuls. But to have knowledge about every candidate in every race — that takes some time. To address that, Louisville Public Media and its news station WFPL have made a one-stop guide to every race that will be on your ballot. The “2022 Voter Guide” will bring you into a portal where you can enter your home address to get a small breakdown on every candidate who will be on your ballot on Nov. 8. WFPL News Director Rebecca (Bec) Feldhaus Adams took some time out of her day to speak with LEO about it. She said it was a massive, staff-wide project that had a goal of preparing and inspiring people to vote.

LEO: So the voter guide is a convenient, effective entry point into the election that’s personalizable by location. I feel like it’s really accessible and informative. Can you talk a little bit about the vision you all had for this?
Feldhaus Adams: Yeah, I think one of the things that gets in the way of elections is the sheer number of candidates, and in a midterm election where voters across the state and in Louisville are going to be seeing Metro Council members, are going to be seeing lots of judges, are going to be seeing mayoral candidates, Senate races, House races, Congress races — it just gets overwhelming. Of course, we’re doing really good election coverage that we hope people will read and consume. But we also wanted there to be one place where someone could go and have an informed view of what they will see on their ballot, because even when you go to the County Clerk’s Office, you have to wait a certain amount of time to get your ballot. And so we wanted to get that out as soon as we could, as soon as we could reasonably put this all together and have something where people can say, ‘I, as just somebody who lives in Louisville, can know what’s going to be on my ballot and learn a little bit about the candidates.’ And one of the coolest features is that you can go through, read about them, decide who you want to vote for, and then you can print a cheat sheet to take with you to the polls. And I gotta give a real big shout out to Justin Hicks, who is our data reporter. That was his idea. But I mean, basically, we just wanted this to be really, really user friendly — for a normal person who doesn’t, off the top of their head, know who their circuit judge is.

What was the hardest part about putting it together? Were there some candidates where it was hard to find any information about them, maybe those who are running in the smaller races?
Yeah, I mean, some candidates, I think, are people who might not really exist online, campaign online, maybe that’s not where their constituents find them. And so there may be a minimum amount of information. In every case that we could, we linked back to something where the candidate is talking about themselves in their own voice. Because of the sheer number of candidates, we could not commit to having an exhaustive biography of each person and all of their endorsements and all of their work history, but we wanted to give kind of a little snapshot, and then let people, if they have a little time and more curiosity, see what the candidates say about themselves in their own words, too.

Have you all received much feedback?
Yeah. I mean, as it goes in journalism, once you post something, you get some feedback. But overall, it has been really, really positive. People have said how useful it’s been immediately. My dad emailed me to tell me how much he likes it, so that’s always very gratifying, when real people are using this and finding value from it. It’s also been cool to see it kind of pop up in my personal circles, like if people didn’t kind of make the connection that I work here, and this is the place that put it out. They’ll be like, ‘Hey, do you see this?’

It’s obviously informative, but do you also see it as an inspiration for people to vote? because I feel like some people get overwhelmed by where to even start. I think sometimes people just don’t vote because they don’t feel super informed, or they half-vote — go and vote for a few races, and then just leave the rest of their ballot empty. was That part of this — inspiration to show up?
Yeah, it absolutely was. Because we were thinking about people who are living their lives, you know, carting their kids to school, or sports, or, you know, running errands or caring for somebody else, who has a busy life and doesn’t have time to read a 1200-word article on every single candidate. And don’t get me wrong, we will write those excellent 1200-word articles about them. But we know not everybody’s going to be able to read everything. And so for people who need just something small, but comprehensive to get them inspired, that’s what this is for. And then of course, we will continue to do our in-depth reporting so that people might learn something new about a candidate, and that might influence them to just get out to the polls. But yeah, we want to make this usable. And so, if someone gets to Election Day, and they say, ‘I don’t know, I haven’t really done any research,’ they can kind of look through this [for] five, 15 minutes, get a sense of who they want to vote for. And hopefully, it will be one less barrier to someone casting a vote. •