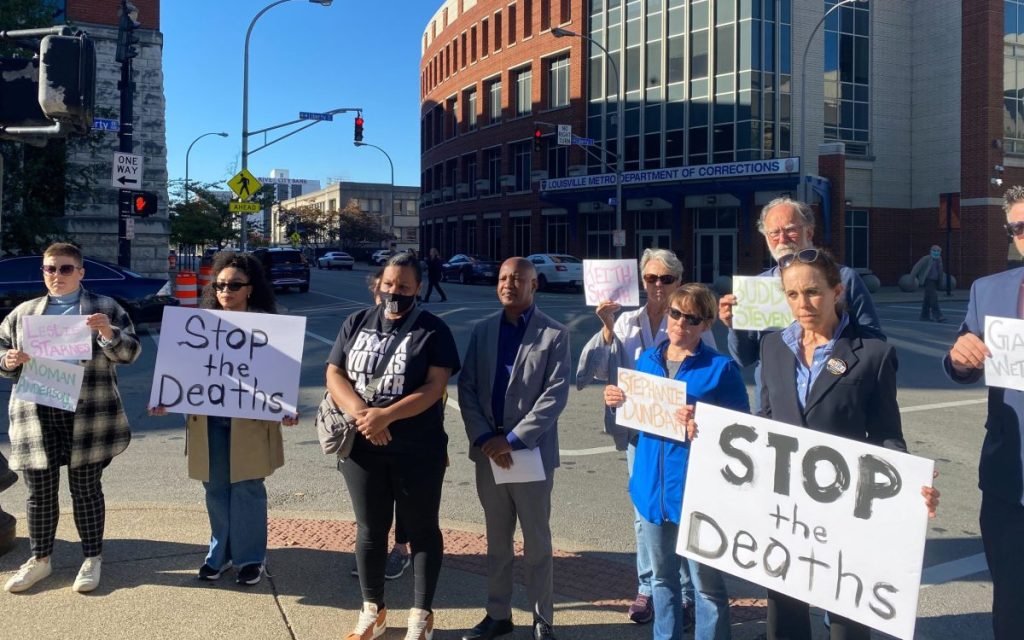 Activists at a press conference outside of Louisville's jail on Oct. 4Photo by Josh Wood.

Another person incarcerated at the Louisville Metro Department of Corrections has died, marking the jail’s 12th in-custody death since last November.

In a statement, LMDC said that at around 7 p.m. on Monday, officers and medical personnel discovered Bashar Ghazawi unconscious. According to Metro Corrections, Ghazawi was transported to the University of Louisville Hospital, where he was declared dead at 7:44 p.m.

“I am disgusted that it would seem another person has lost his life because of those who seek to profit by smuggling these dangerous substances into the Louisville Metro Department of Corrections,” said LMDC Director Jerry Collins in a statement. “We will continue to work hard every day to disrupt the drug trafficking that plagues our community and our jail.”

The announcement of Ghazawi’s death arrived in email inboxes Tuesday morning as advocates for jail reform were gathered across the street from LMDC for a press conference about the recent spate of in-custody deaths. They held signs bearing the names of the dead in marker as reporters glanced down at their phones, learning that the activists were now missing a name.

“I’ve stood before you one too many times. And I’m tired of doing it. We have to do something different. I don’t want a single person to die again in the building that’s across from me,” said ACLU of Kentucky Policy Strategist Kungu Njuguna before learning of the latest death.

Njuguna called on the city to cancel its contract with Wellpath, the company responsible for the healthcare of incarcerated people at Louisville’s jail, saying that there have been reports of the company withholding medication, ignoring complaints, not responding to medical requests in a timely manner and “not meeting mandated time requirements for health-related assessment.”

“These conditions, along with people being unnecessarily held on cash bail, are contributing to the inhumane conditions leading directly to the deadly mental and physical health conditions of those incarcerated,” he added.

Wellpath did not immediately respond to a request for comment.

On the day of his death, Ghazawi, 39, had been found guilty of murder. He was scheduled to be sentenced on Tuesday.

According to a 2018 arrest citation, a witness on Lambert Avenue saw Ghazawi shoot his wife “multiple times” before turning his gun on himself. Ghazawi’s wife died, but he survived his self-inflicted injury.

Daniel Johnson, the president of the union that represents corrections officers in Louisville, told LEO by text message that the incarcerated people in Ghazawi’s housing unit did not alert officers about the medical emergency nor did they use Narcan, a medication that reverses opioid overdoses. Instead, Johnson said, they “decided to cover up the person that was unresponsive to make it appear that he was sleeping.” Those actions, Johnson added, delayed the discovery of Ghazawi by at least half an hour.

Ghazawi’s death comes just days after the city released a report by an consultant hired to examine in-custody deaths. He found that the jail was outdated and that there was a “disturbing” tolerance of poor performance and misconduct by staff. The report warned that a lack of supervision for incarcerated work aides created opportunities to smuggle contraband and stated that it is a “common belief” that some of the drugs entering the facility are brought in by staff.

LMDC’s director, Collins, has said numerous safety improvements and reforms have been made at the jail since he took over in April. However, he has also called for a new jail, saying that the aging facility presents safety challenges that are difficult to overcome.

At the press conference on Tuesday, Black Lives Matter Louisville organizer Chanelle Helm said spending money on a new facility would not solve the crisis at Metro Corrections.