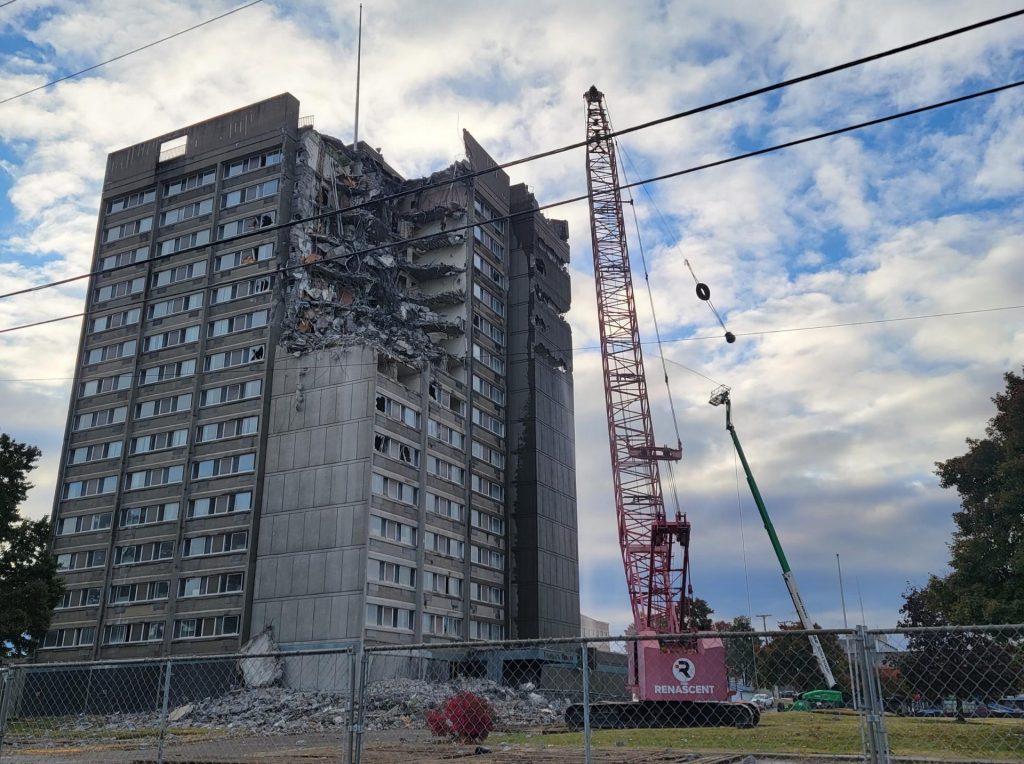 Demolition has begun on New Albany's Riverview Towers. All photos and video by Erica Rucker.

The nearly 50-year old Riverview Towers, a public housing development in New Albany, Indiana, was approved for demolition in 2020, as the aging structure had irreparable issues, according to the city. This week, the demolition of the tower began.

Before the demolition could take place, hazardous materials like asbestos needed to be removed. And, instead of implosion, the building is being taken down by a wrecking ball. As the wrecking crew began bringing the building down, spectators parked nearby to watch, with many taking videos and photographs.

The building was the tallest in New Albany at 16 stories.

In a phone conversation this morning, New Albany Housing Authority Executive Director David Duggins shared that once the plans for demolition started, residents of the tower were relocated to other public housing or with tenant protection vouchers that allow residents displaced by a planned demolition to relocate. The building has been vacant since spring.

Riverview Towers had suffered more damage in recent years. In 2018, a series of fires knocked out air conditioning and power to the entire building causing residents, many of whom were elderly or disabled, to temporarily seek relocation.  When residents came back to their apartments they were given window air conditioning units as the air had yet to be repaired. This, in combination with other structural factors of the building, made demolition the best option, according to city officials. They said there had also been water damage in building and suspected ground contamination.

Once the demolition and clean-up of the site are complete, the city plans to take requests for proposals to sell the site. The city holds a non-profit for affordable housing under the Southern Indiana Housing Corporation. Duggins told LEO the money from a sale would go to the non-profit.

“What we’ll do is put out a request for proposals and any proceeds from the sales will go back into our not-for-profit and then we’ll use it for affordable housing developments in our region,” Duggins said.  “It has to be used for the promoting of affordable housing.”

As of now, the request for proposals will not be issued until the site is cleaned, which is expected to take several weeks, but Duggins does see potential for the real estate as it sits at the foot of the Interstate 64 West exit to New Albany.

“I would assume that a developer looking at a hotel, something of that nature, because it’s right there by the interstate,” said Duggins. “But I don’t know.”