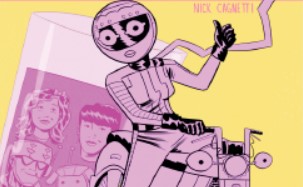 Written and Illustrated by Nick Cagnetti

“Pink Lemonade” started as a series of comic strips starting in 2016. Nick Cagnetti has brought his optimistic hero to a larger format, and you will not be disappointed. She may not know her true identity or where she’s from, but she’s dedicated to bringing good into the world.

With a pastel pink and yellow motorcycle, Pink Lemonade is more concerned with adventuring rather than finding out about her past, which she remembers very little of. She travels from place to place seemingly to run from her past rather than to figure it out. This doesn’t stop Pink Lemonade from unapologetically being herself, even if she may not know a lot about who she is. Pink Lemonade got her name from Pammy, a kid who found her at her lemonade stand. Drinking the pink lemonade gave her some mental clarity, so it was a fitting name.

The world of “Pink Lemonade” is very colorful and fun, and there is never a lack of adventures to be had. If you appreciate pop culture nostalgia, you will appreciate “Pink Lemonade.” The author creates plenty with OJ-Bot, a discontinued cartoon hero which shares the fate of many super hero comics modernized with a dark reboot. If you’re looking for a creative twist to traditional feel-good superhero stories, then “Pink Lemonade” is the book for you.

In the ‘80s, a city was built called Trenchen, billed as “the new San Francisco.” After failure and financial setbacks, the city just became known as the Trench. The Trench is now home to gangs, prostitution, drugs and organized crime.

Issue No. 1 of “Maskerade” introduces us to the various characters and situations in the first book by Kevin Smith’s Secret Stash Press line of comics. First we meet Felicia Dance, internet sensation and TV host/reporter outing sexual predators and other unsavory types on her weekly show. Her company has offered Dwayne, an up-and-coming news producer with excellent journalism qualifications a job, even though he was just fired because he got caught in a compromising situation with the wife of the head of news division, who also happens to be the city’s favorite news anchor.

Oh, and let’s not forget the beautiful 20-something girl who jumps from the top of a high-rise, but when examined has the body of an old woman and merely the face of a 20-something. But wait, there’s more! A nasty crime boss is met by a masked heroine/villain (we can’t really tell yet) who takes an image of his face as a mask, then proceeds to keep him in a cage in an old orphanage.

All this makes for a fantastic setup for issue No. 2 of this four-issue limited series. It has quite the pedigree, with comic and movie phenom Kevin Smith and screenwriter Andy McElfresh creating the story paired with a perfect art style by John Sprengelmeyer in the panels. Hopefully, the next three issues will tie all the pieces together for a great story that, who knows, might end up on the big screen one day.