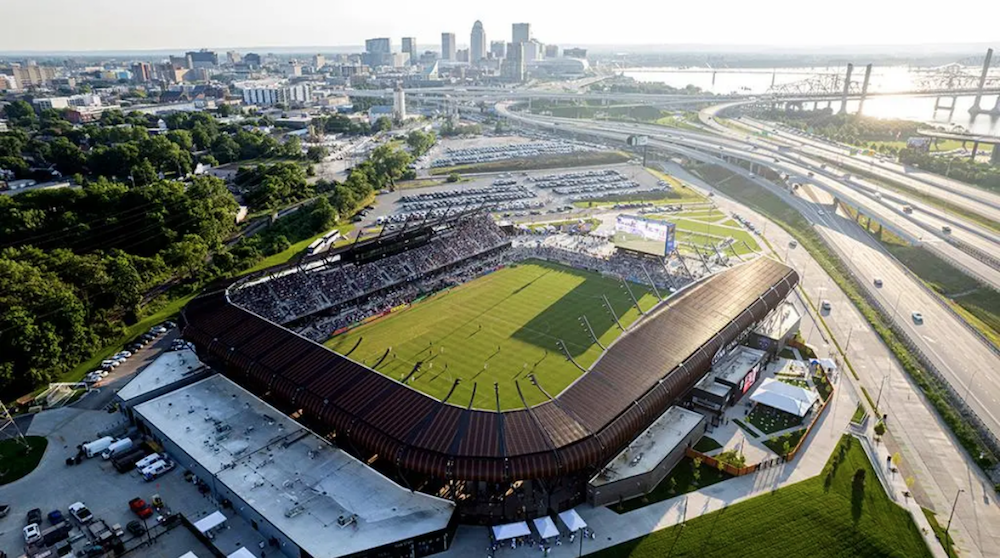 It was the last game of a losing season for Louisville’s professional women’s soccer team, but it was also a high point for a club that at one point this year suffered through a 13-game winless streak; Racing had held their own against the playoff-bound Kansas City Current and surged to a 1-0 victory with an electrifying Jess McDonald goal in stoppage time.

The win felt like an omen of good things to come.

That feeling was shattered less than two days later when a bombshell report by former U.S. Deputy Attorney General Sally Yates about wide-spread abuse in the National Women’s Soccer League came out.

“To open a document that’s 319 pages in length and have a Racing Louisville vignette be the very first paragraph that completely frames a document that chronicles systemic abuse in a women’s sports league is pretty shameful,” said Taylor on Tuesday. “In terms of a word that would capture that feeling, I would say yesterday was pretty devastating.”

Racing Louisville featured prominently in the report, which was commissioned by the United States Soccer Federation, with Yates writing that former Racing Louisville coach Christy Holly repeatedly sexually abused former Racing player Erin Simon. At one point, the report said, Holly told Simon he was going to touch her “for every pass [she] fucked up” while reviewing video of a game and proceeded to push his hand down her pants and up her shirt. Holly had drafted Simon to play for Racing in 2020 after he had allegedly already started sending her sexually explicit messages and photos while pressuring her to do the same. After Simon eventually confronted Holly about his behavior, she said her coach “stopped physically abusing me but started verbally abusing me.”

According to the report, Simon eventually confided in Racing Louisville’s chaplain about the abuse, who then reported it to the club. Holly was quickly fired “for cause” in August of last year, with team leadership telling players that he had been terminated for an inappropriate relationship with a player and asking them to keep that news “within our locker room,” the report said.

When asked in an interview whether Holly was fired for doing something illegal, the team’s then-executive vice president (and current president) James O’Connor said: “I don’t know whether I’d say illegal. I don’t know, that’s a subjective viewpoint if you like, depending on who’s asking and different people. I’ll plead the fifth. I’ll take the attorney line on that.”

According to the report, Racing Louisville refused to cooperate with Yates’ investigation and cited non-disclosure and non-disparagement agreements.

The accusations of abuse outlined — alongside the Racing’s role in shielding the misconduct and the club’s silence since the investigation came out — has outraged fans of Louisville’s only major league sports team.

Michele Reise of Cecilia, Kentucky was the president of the LouCity Ladies supporter group when Holly was fired last year. She said the team made contact with her to say that he had been fired for “inappropriate” behavior but would not elaborate.

When the Yates report came out on Monday, Reise was shocked, angry and disgusted.

Like other fans, she is calling for O’Connor, the team’s president, to leave the organization.

[In a statement Wednesday afternoon after this story was published, O’Connor said hiring Holly was a “mistake” and apologized to Simon, players and fans. O’Connor said the team commends Simon on “her bravery in coming forward” as part of the Yates investigation. While he apologized, O’Connor made no mention of stepping down.]

Since the report came out on Monday, Racing Louisville has not issued a statement. The team declined to comment when contacted by LEO Weekly.

For fans, that silence has exacerbated frustrations with the team, which sells “protect women” t-shirts on its website.

While Racing has been silent, the Portland Thorns FC and Chicago Red Stars issued statements and saw their owners step aside from decision-making duties amid allegations of misconduct by coaches.

Some fans are talking about hitting Racing Louisville’s wallet to force change. But there are also worries that doing so harms the players on a young team that has struggled with attendance.

Racing fan Cara Tobe said she called the team on Tuesday to tell them that she would not be renewing her season tickets unless changes were made and O’Connor departed the organization.

“I want to support the team. Like I’ve got stickers on my car, I’ve got stickers on my water bottle. I have a bunch of merch. I’m a season ticket holder. I’ve got my name on the seats. Even when they’re not playing to the best of their ability, I still stood up for them and was like ‘they can still do this,’” she said. “And then this happened and it’s like: Come on. This is why we can’t have nice things: Because of terrible, terrible men protecting other terrible, terrible men.”

While she called the team office to threaten ending her financial support, Tobe said she would listen to players and follow whatever they say will best support them.

Benton Newman, who has a podcast about Racing Louisville and the LouCity men’s team, had similar feelings.

“It’s a little bit of a Catch-22 and I think a lot of the Racing Louisville fan base is trying to navigate through that: How do you push for change and not further harm the players?” he said. “At least for the foreseeable future, until we’ve gotten more information, I don’t really plan on spending much additional money.”

The Coopers, an independent supporters group for both Racing Louisville and the LouCity men’s club, are calling for fans to abandon purple (the color of both clubs) at Wednesday night’s LouCity match and wear teal, a color associated with sexual assault awareness.

Both LouCity and Racing are owned by Soccer Holdings, LLC. O’Connor is the president of both clubs.

Additionally, The Coopers said they will not be hanging banners at Lynn Family Stadium or engaging in chants, or cheering during the first half of the match on Wednesday.

“There will be complete silence. We’re going to be just like the club,” said Herman Quinn Jr, the president.

Quinn Jr. said if the team does not say anything about the report, they will continue their protest into the second half, remaining silent even when goals are scored.

“It’s nothing personal to the boys,” he said.

According to the Yates report, players across the NWSL were “repeatedly enlisted in the effort to keep the League afloat by protecting it from scandal and were told to be grateful that they had an opportunity to play professional soccer at all.”

After the release of the report, Racing Louisville players have largely remained quiet. However, on Instagram, fan favorite and Louisville native Emina Ekic shared a statement from the NWSL players’ union that said, in part: “As difficult as this report is to read, it has been even more painful for players, whether known or unknown, to live it.”

Reise, the former LouCity Ladies president, said the kinds of abuse outlined in the Yates report is not limited to soccer.

“What’s going on in women’s soccer goes on in corporate America. It goes on in the military, it goes on everywhere in the United States. Everywhere. Every day,” said Reise, adding that occasionally, like during the Me Too movement, enough noise gets made that those in power pay attention. “Once everybody shuts up, they just go back to doing what they were doing before. There’s no change. There’s no improvement. It’s nonstop. It’s nonstop attacks on women whether it’s sexual whether it’s financial — it’s just constant. It’s exhausting.”

*To see photos of a recent protest at a LouCity game, click here.