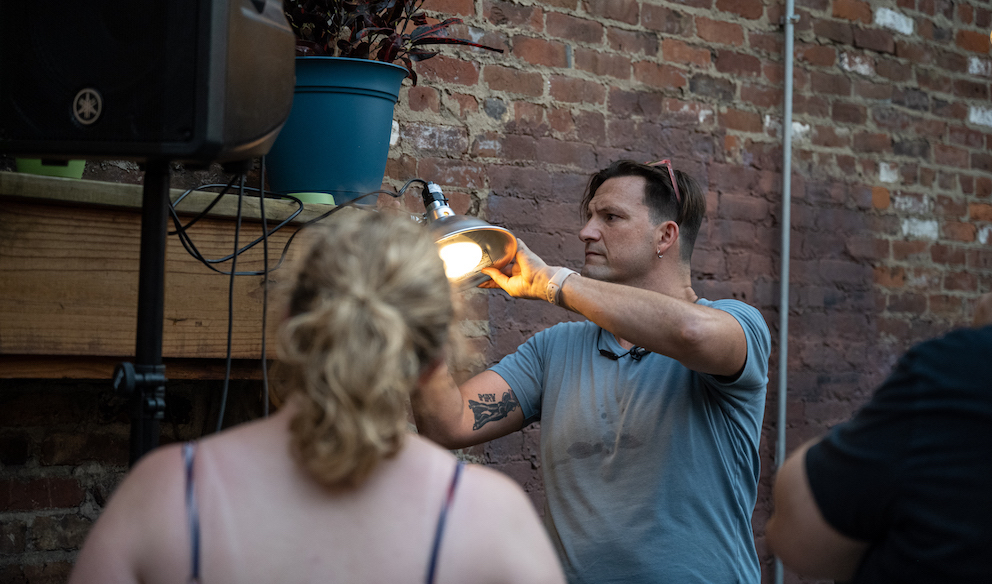 “The Girl Crazy Queer And Other Fairy Tales” is the new play by Louisville playwright, Alicia B. Fireel. The play is a one-person show that takes eight interconnected and original fairy tales and a realistic classroom drama to explore the topics of queerness, neurodivergency and living with trauma. Fireel said about the play, “Non-binary genders are still underrepresented, neurodivergent folx are still underrepresented, and the intersection, neaurodivergentqueer people? It doesn’t get written about. Especially not by actual neurodivergent queer people.”

Tickets are $10 for students and $15 for the general public.

LEO asked Fireel a few questions about the play and their collaboration with Pandora Productions.

LEO: Tell me about the new play. What was it like to write it? Inspiration?

Alicia B. Fireel: To be honest, writing this play was TOUGH. I started writing pieces of it last spring, but a lot of the thoughts and ideas have been in there a LOOOONG time. I love fairy tales. I love shadow puppets. I love storytelling in theatrical settings. But also, while this play is fiction, there is a lot of stuff that very directly relates to my childhood. And it’s very difficult to work with that stuff.

I was an intense reader as a kid. I loved fairy tales, then, “King Arthur,” and “Robin Hood,” and fantasy novels. I noticed several years back that a lot of my queer friends, as well as my neurodivergent friends, we all shared that same progression. Like, maybe a lot of queer kids grew up listening to musicals and stuff, but me and a lot of my friends, we escaped the straight world by going someplace magic. I’ve been fascinated by that for a while. There are probably at least two more plays about it in my brain.

I always have about a dozen possible plays in my brain, and I’ve wanted to do a one person show for a long time. Something else always got in the way. But I’m getting my MFA at U of L’s theater department, and as my thesis I have to do a big role, and then write about the process. I decided that NOW was the time to do the one person show.

So taking all of that and distilling it into a script was hard.

And a lot of the direct inspiration for the very FIRST chunk of this play comes from artist Monica Stewart. She’s amazing. We’ve been friends for several years. She’s just as obsessed with fairy tales and the fantastic as I am. She made all the puppets for this show, and they are each just beautiful little pieces of art. She’s got a show opening at KMAC in a couple of weeks. It’s going to be amazing.

You’re presenting this with Pandora… right? How is that collaboration working? What made them the right fit?
Pandora was kind of the obvious choice from the beginning. They’ve been on my list of people to work with for a while, and this play is very queer. Pandora has been doing this work and telling queer stories for 25 years now.

The collaboration has been great. I reached out to their Artistic Director Michael Drury, about a year and a half ago, and started the conversation. He was immediately interested, but we had to work and get it approved by our respective organizations. He’s been pretty hands off, but also ready to help out at the drop of a hat. As an independent producer, I’m often used to doing everything myself, so it’s very nice to have someone taking care of a lot of the producing side. I worked with director Gil Reyes, who I’ve been making queer theatre with for a couple of decades now. He’s directed new work of mine before, he’s done shadow puppet stuff with me on a show, and he has also performed a long and difficult one person show in the past, so I felt he had the right mix of skills. I don’t think this play would have happened without him. I have so much energy and so many ideas, and if there isn’t a strong hand on the wheel, I can drive the car right off the road.

How many shows are you doing and are there any extra engagements or events to coincide with the play?
It’s a short run, Thursday, Friday and Saturday. It’s my hope it comes back at some point, and it’s my plan to start entering it into Fringe Festivals. But for now it’s just three nights. We don’t have any talk backs scheduled. After each time we run the show, it takes a couple of minutes for the adrenaline to run out, but then my knees kind of buckle. I’m usually about to fall over. So talkbacks didn’t seem like a great idea. I’ll probably be in the lobby ugly crying with all my friends tho — so everybody should feel free to say hi.

What do you hope audiences walk away from this play knowing, feeling or thinking?
Hah — A deep need to tell people to go see my show. I don’t know. I definitely want cis-neurotypical queer audiences to think about the complexities of queerness and queer stories, and the intersection of queerness with other identities. There’s still a lot of ableism and transphobia in the community. In the circles I travel, the intersection of queerness and neurodivergence is everywhere. For me, it is inseparable. I can’t love my queerness and my gender without also loving my ADHD and my manic depression. My queerness is my neurodivergence, and vice versa. And I wish I could say that most of us don’t also have trauma wrapped up in our queerness, and our neurodivergence, but we do. But it’s also about laughing, and friendship, and always recognizing how our community can support each other.