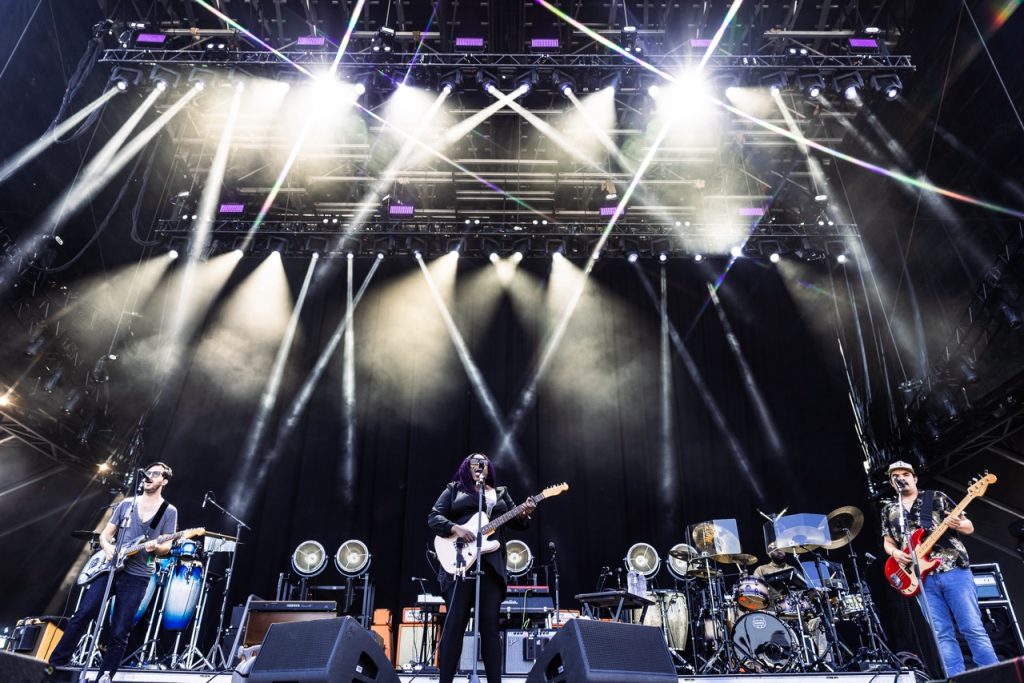 Yola gets the crowd dancing at Bourbon and Beyond 2022. Yola Photos by Steve Thrasher

What a weekend! Bourbon and Beyond 2022 is in the books, but before we completely close the chapter, LEO was onsite all weekend, taking in the vibes, sights and sounds. We even took some time to sit down and talk with one of the artists.

We’ve written about Yola a couple of times because we think she’s someone you should know. At Bourbon and Beyond, Yola delivered a blistering set on Sunday, filled with her wonderfully full voice but if you listen past the voice, the lyrics of the songs are equally as passionate and full. Yola has had a big year, touring with Chris Stapleton and wrapping up a role in Baz Luhrmann’s “Elvis,” where she played Sister Rosetta Tharpe. When Yola walked into the media area for our interview, people in the area clapped for her with cheers and smiles. I hadn’t seen anyone do that until this point. Yola joined me in one of the lounge areas, tolerated the barrage of rude Kentucky flies that bothered us as we talked about her sponsor George Dickel Tennessee Whiskey, her tour, her first acting gig, the importance of her stepping into that role and more, of course.

(Interview edited for space and clarity)

LEO Weekly: Great to catch up with you again! Let’s jump in and, since this is a Bourbon Festival, talk about George Dickel and how you began working with the bourbon brand.

Yola: So my whole exposure to bourbon has been through cocktails. Many of my friends, back in the UK, are cocktail bartenders — Manhattan’s, Old Fashions, you name it. I’ve had a long exposure to bourbon. And so when it came to a bourbon festival, I was like, ‘tell me what’s bad about this’. There’s so many parallels between the drinking culture and music culture. Not only that our schedules seem to align because we all work weekends, and then we all have our rave on Monday,  but it’s also that artistry because there’s this real kind of sense of creativity and experimentation in music and in bourbon-making.

I feel, certainly, like the expression of George Dickel, pallet-wise with its kind of vanilla, and warm notes, really it’s a very experimental approach to bourbon-making, and that feels like a fit because I’m genre fluid. That’s my thing, you know?

I like to kind of be in the space of people, creative people that are being experimental these ways. And so it felt just like a really natural thing, and us both being Nashville-based was just right on.

It’s been just over a year since the release of your album. Talk to me about your year.

it’s been like one of these years that like, cuz we’re kind of just towards the end of summer, but like I was just getting into it a year ago because everyone was figuring out what they were gonna do. And, I was lucky that I was supposed to be touring with Chris Stapleton before the pandemic. My diary already had things to do, and we were so fortunate to be able to be touring with a big machine that could put all the protocols in place and get out there safe and early. That was like one of the proper lifesavers of this past year…just the graciousness and the good energy of Chris Stapleton’s crew, and Chris and Morgan.

Then, picking up and doing my headline tour myself has been epic. And, just taking this record out to everybody and seeing what it means to people, and how people are connecting to it. I haven’t being able to talk about my writing, like my voice seems to overshadow, sometimes, the conversation of writing, because I’m big-voiced.

That’s something that I really love getting the opportunity to do in these headlining shows is to actually give people a bit of a look behind the song. And there’s never been a moment that people haven’t been surprised. 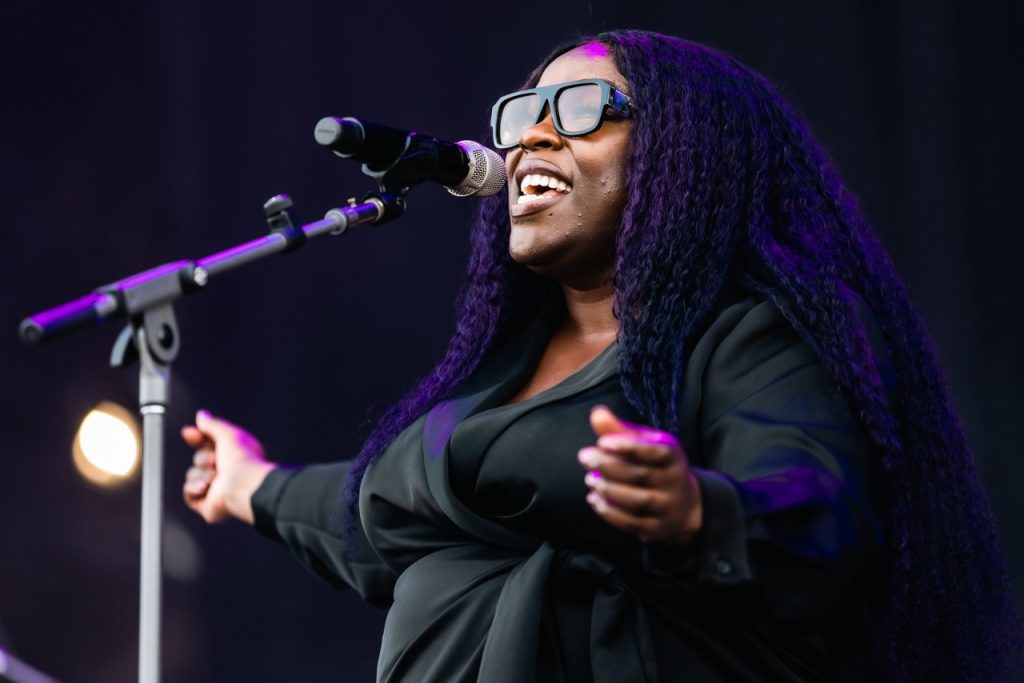 How did you decide to cover Elton John’s “Goodbye Yellow Brick Road?”

I grew up with Elton John. He’s a person that is undeniably fabulous — right — but that came from real salt of the earth working-class beginnings. And I’ve got a lot of time for people who have made something out very, very, very, very little. So, I felt like as a kid, I really had a connection with him in that way, and him being a perceivable, ‘other.’

You mention Elton John being a perceivable ‘other,’ and you’ve talked in interviews about having the struggle with white supremacy and having that be a barrier. How do you continue to push and what do you do when you need to stop pushing?

You go where you’re invited and you peace the heck out of places that don’t wanna work with your energy. Honestly, you have to be explicit with that. I generally, as a rule, and — I want this to be on record somewhere — I don’t fuck with people that don’t fuck with black women. There are genres of humans on earth that don’t know how to fuck with Black women.

One of the most essential flaws I can see in a human is when they’re like: they’re fine with black men, but they don’t talk to black women. I’m like, okay, well, if you have that flaw within you as a human, why would I turn up? If you don’t like black women, I’m dark, you’re not gonna like me. And I’m really outspoken.

I’m not unfiltered, but I am outspoken, and so, you’re gonna double hate me. You’re gonna triple hate me. I’m not gonna give you any tropes to make you feel comfortable.

When you find yourself in a situation that ain’t right, you do what they call the Irish exit, which is to disappear without saying goodbye. I did that on a whole country. That’s why I’m here.

You played Sister Rosetta Tharpe in “Elvis.” Tell me about that experience? Did you learn guitar for that role?

I’ve been a rhythm player but I had to learn to play lead, which is a completely different job.  I wanted to honor Sister Rosetta Tharpe and I wanted people to see someone doing that, but also I wanted to get inside the process so I could talk about it and advocate more, being a musician and a dark-skinned, plus-sized woman. When you are those two things:  dark and plus-sized, the ease with which people can forget your name or be cagey about attributing genius to your name is high. And, so I knew that I had to be that person in the movie, to do that work, and to do that job well, because dark and plus  is the ultimate erasure. It’s important to represent dark-skinned women. It’s important to represent plus-sized women. And, specifically ,dark-skinned, plus-sized women just so that we are not the group to get erased. Right. And everyone goes, ‘I’m anti-fat for a health reason.’ I’m like, ‘no, you’re anti-fat’ because it’s Eurocentric. 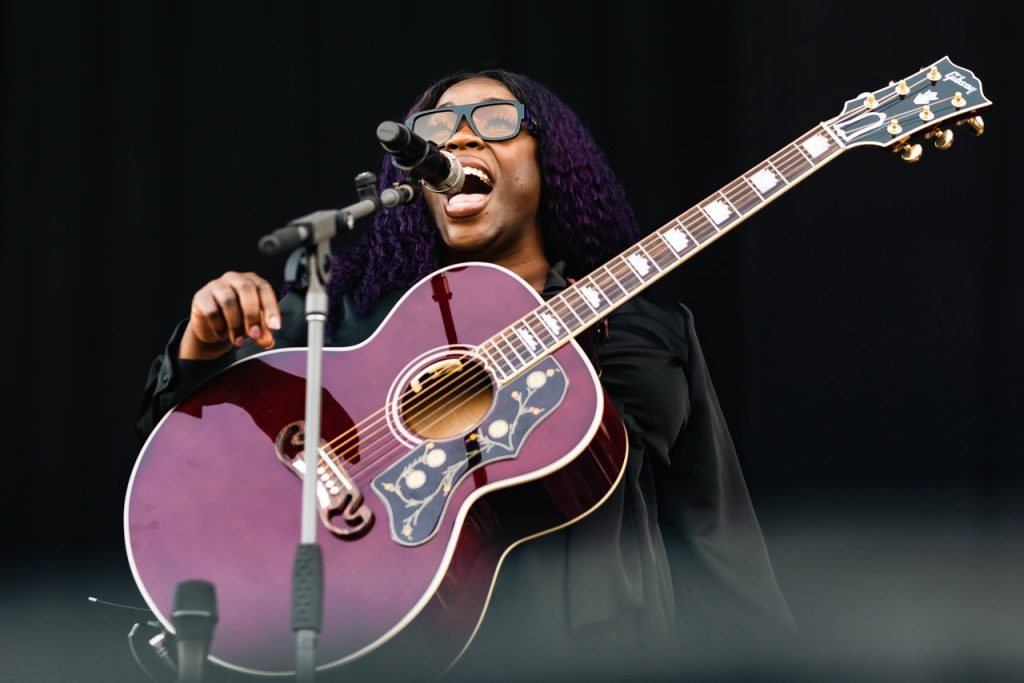 Since you are English, did you have voice coaching to play Tharpe?

I had some training which was helpful, and the singing is a lot easier because when you elongate a. It’s harder to make it tall, so it naturally flattens out just to sustain, just to resonate against the palette. Through the process of this job of mine, mostly being singing in this role, I needed a lot less training, in that regard. I also used to do this job working for a replay company, a sample replay company. Basically it’s singing acting.  I didn’t realize that I’d been doing that job for about 16 years, and I had no idea, I was secretly training for it. My entire life. Then, I went into the studio and Baz Luhrmann was there and he saw me doing it. And he’s like, ‘do you act?’ I’m like, ‘oh no, I just did the sample.’ he goes, ‘that’s the same?’