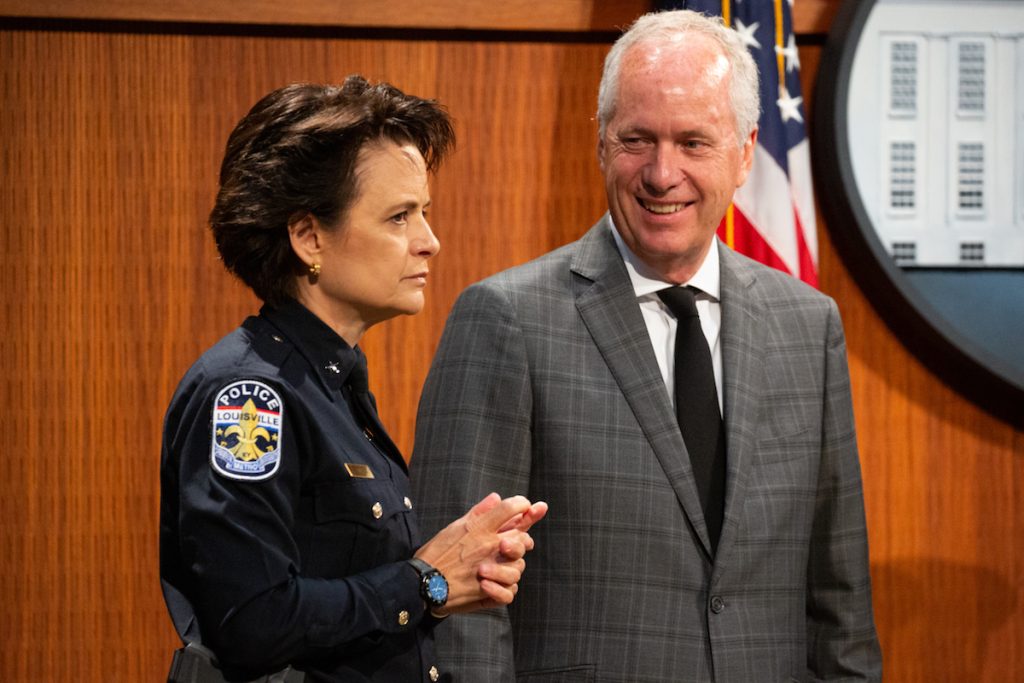 In the coming weeks, the Department of Justice is expected to release the findings of its investigation into whether the Louisville Metro Police Department engages in practices that violate the United States Constitution or federal law.

In such investigations, the DOJ looks for patterns or practices of constitutional violations: things like excessive use of force, racially-discriminatory policing, illegal searches and seizures and interfering with the expression of First Amendment protected free speech. If such violations are found, the DOJ will likely propose a consent decree: a negotiated agreement between the city and the federal government for the city to address those violations while being monitored.

“It gives the federal government a way to address those things in police departments that either cannot or will not address the problem and fix it themselves,” said David Harris, a University of Pittsburgh professor of law who studies police behavior and consent decrees. “So it has great utility and is one of the very few things you can do to take policing as a system, as an institution, and try to proactively fix it looking forward.”

Harris added that while an individual event — like the police killing of Breonna Taylor — can trigger a DOJ investigation, the DOJ focuses on broader patterns of misconduct instead of individual incidents. (In DOJ criminal investigations separate from its pattern or practice probe, seven LMPD officers have been charged in misconduct cases so far this year.)

So far, Louisville has tried to get ahead of the findings by implementing numerous reforms, which city officials have said could potentially shorten the length of a consent decree, which have the potential to drag on for many years.

Danny Murphy, a consultant hired by the city who previously oversaw consent decree reforms and compliance in Baltimore and New Orleans, told Metro Council last year that Louisville could expect to pay $8 to $10 million per year under a consent decree.

Harris, the policing expert at the University of Pittsburgh, said that consent decrees are indeed expensive undertakings and often fall on cities that are already stretched thin financially.

“But I think what people fail to understand is: If this costs a lot, so does terrible policing. It’s just that that cost is foisted onto poor people generally, communities of color who suffer under unconstitutional policing. They pay that price,” he said. “So when you ask ‘what’s the dollar cost?’ you have to ask ‘what’s the alternative?’ too.”

As Louisville prepares for the release of the DOJ’s findings and anticipates conversations about a consent decree, LEO Weekly took a look at the experiences of three other cities of (roughly) similar size that have seen their police departments come under consent decree.

After a series of police killings — including an incident that saw officers kill two unarmed Black people by firing 137 shots at the vehicle they were in after a pursuit triggered by the sound of a car backfiring — Cleveland’s mayor asked the DOJ to come in and investigate the department in 2012.

In December 2014, the DOJ said they found a pattern of excessive force in the Cleveland Division of Police that was fed by a lack of accountability, inadequate training, ineffective policies and a lack of community engagement. The DOJ also wrote that CDP officers “carelessly” fi red their weapons.

Just weeks before the DOJ report came out, a Cleveland police officer shot and killed 14-year-old Tamir Rice, a Black child who was carrying a toy gun in a city park.

With Cleveland in its eighth year of a consent decree, patience is wearing thin for some. Last month, first-year Mayor Justin Bibb, a Democrat, called for an exit.

“The quickest we can get out of this decree, the better it will be for the police department and the taxpayers, so we can kind of use that money to reinvest back in the community in the long term,” he said at a press conference according to northeast Ohio public news radio station WKSU.

There is also significant pushback from the police union, the Cleveland Police Patrolman’s Association, which called Cleveland’s safety director a DOJ “puppet” last year after 13 officers were fi red for misconduct.

As part of the consent decree, the Cleveland Community Police Commission was created to bring community input into police reform. Jason Goodrick, the executive director of that commission, has doubts about the long-term effectiveness of consent decree reforms though, saying that police departments nationwide are resistant to lasting change.

“Police are very good at outlasting the political, short-term need for them to reform. And you typically see the same cycle of reform, then police using increasing crime and a fear of crime as a reason to lessen reform,” he told LEO Weekly. “It’s like a circle of life that continues over and over in city after city.”

However, Goodrick said, in the short term, police departments can sometimes see dramatic change with federal oversight and that he believes the consent decree process has engaged the community more than before.

To Baltimore community organizer and Citizens Policing Project Director Ray Kelly, the city’s five years under consent decree have been a glacially slow process that has not seen relations between police and the community improve.

“The process is excruciatingly slow,” he said. “It’s understandable when we’re talking about 150 years in a lot of cases of oppressive policing and that culture.”

The department came under DOJ investigation in 2015 following the killing of Freddie Gray, a 25-year-old Black man who died from injuries he sustained while being transported by police officers. While police said Gray was arrested for having an illegal switchblade knife, the State’s Attorney for Baltimore City later said the knife he had was legal.

The DOJ declined to prosecute any officers in Gray’s death, saying there was insufficient evidence. But in 2016, the DOJ said its separate wide-ranging investigation into the Baltimore Police Department found a pattern of civil rights violations, with officers using strategies that unlawfully subjected African Americans to higher rates of stops, searches and arrests. They also said there was a pattern of excessive force and interference with the right to free expression.

Just before the consent decree was approved by a federal judge in 2017, the eight members of the Baltimore Police Department’s elite Gun Trace Task Force were arrested on federal racketeering charges, with members stealing narcotics and cash from drug dealers and shaking down motorists in incidents now immortalized in the HBO mini-series “We Own This City.”

The city’s woes have continued since the consent decree started in 2017.

Since coming under consent decree, the city has run through four police chiefs and three mayors. Of those police chiefs, one resigned after being charged with failing to file tax returns for three years. He would later spend 275 days in prison. Of those three mayors, one was sentenced to three years in prison on fraud and tax evasion charges.

Meanwhile, the city has registered at least 300 homicides for seven consecutive years.

Like Goodrick in Cleveland, Kelly said he sees a see-sawing cycle between calls for reform and police using narratives of rising violence to push back against reform.

Data echoes his feelings about the relationship between the community and police remaining bad following the consent decree; A public perception survey of Baltimore residents that was commissioned to comply with the consent decree found that 60% of respondents did not believe BPD made the city safer. In that same survey, 51% said police did not treat people with respect.

But despite the shortcomings of the consent decree, Kelly thinks it is necessary.

“I think people have to recognize this is systemic and cultural change and it takes time,” he said. “I in no way, shape or form feel that we don’t need the consent decree. Because the alternative is mistreatment of Black people all around the country as there’s always been.”

After nearly a decade under consent decree, New Orleans is another city trying to escape its federal oversight.

Last month, New Orleans Mayor LaToya Cantrell called for an end to the consent decree, saying it was an “overburden” on officers on the force today, who were in no way responsible for the actions of officers who landed the city in the DOJ’s crosshairs.

“The consent decree handcuffs our officers by making their jobs harder, pestering them with punitive punishment and burying them with paperwork that is an overburden,” she said in early August, according to NBC News.

In response to a motion fi led by the city to end the consent decree, the federal judge overseeing the agreement warned that the department’s ongoing staff shortage of hundreds of officers was an “emergency” that was dragging the force into non-compliance.

Soon after taking office in 2010, then-New Orleans Mayor Mitch Landrieu asked the DOJ to investigate his city’s police department, writing that many considered it “one of the worst police departments in the country” and asserting that “nothing short of a complete transformation” was needed to keep citizens safe.

“The NOPD has long been a troubled agency,” the DOJ said in its opening words of the 2011 findings of their resulting investigation. “Basic elements of effective policing — clear policies, training, accountability and confidence of the citizenry — have been absent for years. Far too often, officers show a lack of respect for the civil rights and dignity of the people of New Orleans.”

The city came under consent decree in 2013.

Matthew Nesvet, an anthropologist and police reform expert, spent a year working in New Orleans as a consent decree monitor. That experience left him with a bad taste in his mouth, questioning the effectiveness of the consent decree and the possibility of real change to occur.

To meet metrics for community engagement, he said, precincts would share pictures of officers interacting with members of the public. On another occasion, he recalled, monitors observed and said nothing when police emailed a safety warning about a Black Lives Matter protester who was critical of the police on social media despite no indication of criminal activity. To Nesvet, it felt like officers weren’t changing the way they were policing the city, just the kind of paperwork they filled out. And the monitors, consultants and companies offering technology solutions were “a revolving door of government contractors” cashing in on a lucrative cottage industry.

“It’s not a permanent infrastructure to monitor the police,” he said. “A city is dependent on these independent monitors to sort of mandate compliance. As soon as they leave, whatever small degree of compliance they offer — which I think is less than they claim — goes away.