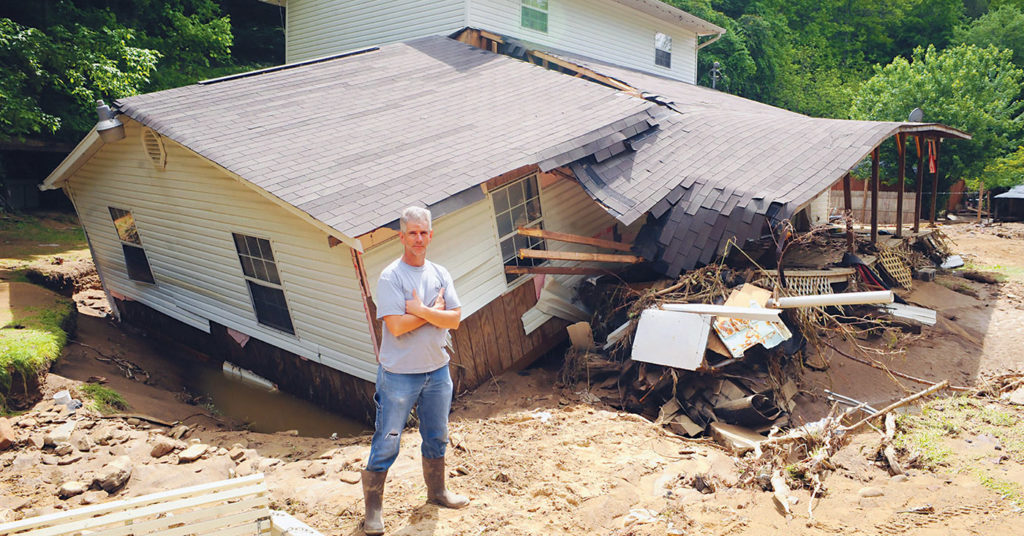 “This story was originally published by Mountain State Spotlight. Get stories like this delivered to your email inbox once a week; sign up for the free newsletter at https://mountainstatespotlight.org/newsletter.”

When four and a half feet of water engulfed the town of Fleming-Neon, Kentucky, in July, fire chief Carter Bevins found himself in an unfamiliar position.

“We were helpless,” he said.

The volunteer firehouse, which sits on a small road directly in front of Wright Fork creek, was surrounded by a chest-high wall of water. The phone rang again and again, with residents begging for help. But Bevins and his team couldn’t open the door. All the firefighters could suggest to panicked residents was that they get as high as they could.

“We try to take any situation and neutralize it, make it for the better. How you gonna do that when you can’t even get out of your own building?” Bevins asked.

Fleming-Neon wasn’t the only community to find itself in this position: With vast portions of eastern Kentucky still reeling from the July flooding that ruined thousands of buildings, displaced hundreds and killed 39 people, elected officials are focusing on  disaster response. The same is true right across the border in West Virginia, where catastrophic flooding has become a regular occurrence for people in communities from McDowell to Kanawha.

But for years, officials have ignored their own, completed plans for how to prevent these kinds of disasters from happening in the first place. West Virginia has had a comprehensive flood mitigation plan on the books since 2004, though officials have taken little concrete action to implement it. And in Kentucky, extensive regional plans spell out how communities could decrease the potential for flood damage.

In these cases, planning and taking action haven’t gone hand-in-hand.

Climate change is shaping the floods, the evacuations, the response

The topography and residential patterns of eastern Kentucky and West Virginia naturally lend themselves to flooding. In these mountainous areas, where most people live on narrow strips of land next to creeks and surrounded by mountains, water runs down the mountains and overflows small tributaries.

But the past decades of logging and coal mining have made these flooding events worse, by stripping surface areas of their ability to absorb the water. And as the climate changes, major flooding events will happen even more frequently.

Climate change makes the region more prone to sudden, intense storms that drop a lot of rain, as an increase in atmospheric temperature increases the amount of water vapor in the atmosphere, making precipitation, and in particular flooding, more likely.

Marshall University professor and State Climatologist Kevin Law says he’s seen an increase in precipitation in West Virginia and much of the region since he began his role in 2008.

Part of a state climatologist’s job is to use this data to predict future climate trends.

But Law says that global warming is also making floods like the recent one in eastern Kentucky harder to pinpoint in advance. Due to temperature-driven changes in the jet stream, which steers storms, there have been more “training” events in the region: where very narrow yet intense storms line up like cars on a railroad track and follow each other.

These storms are so narrow that it’s difficult for climatologists to accurately predict where they’re going to turn up until they actually happen, as if they were tornadoes, Law says.

“You can kind of get an idea if it’s going to happen in Kentucky, but precisely where you just don’t know until you start to see that line up on the radar, and then you can put out the warning but oftentimes then it can be too late,” he said.

The increased frequency and severity of storms means that Kentuckians and West Virginians are facing more potential damage on a regular basis. That makes infrastructure projects like dams and floodwalls, as well as levees, updates to buildings, and emergency notification systems all the more important.

In West Virginia, after 20 years, plan is still a work in progress

West Virginia is very familiar with the type of planning required to protect residents from the worst impacts of floods. In 2004, a 20-agency task force produced a 365-page Statewide Flood Protection Plan, the result of generous federal and state contributions and four years of work. The plan was loaded with actionable suggestions on floodplain and wastewater management, ordinance enforcement, better flood warning systems, improved building codes, and a tougher approach to resource extraction. Yet it was never implemented by any of the state agencies that would have had jurisdiction over parts of the plan.

Here, the effects of this more frequent flooding were most recently obvious in 2016, when a catastrophic flood damaged or destroyed thousands of homes and businesses, and killed 23 people.

Weeks later, the Charleston Gazette-Mail reported how the state had taken no action on the earlier plan. The following year, the state Legislature established a joint Flood Committee and a State Resiliency Office, designed to orchestrate statewide responses to disasters and create a new flood mitigation plan that drew from the work done on the first one.

Five years after the committee and the state office were created to update the state’s mitigation plans, there is nothing in place.

“There’s not, unfortunately, a lot of instant gratification associated with mitigating flood risk,” said Matthew Sanderson, the senior manager of flood-prepared communities for Pew Research Fund. Pew is currently working with the Resiliency Office to develop a new plan. He said that the more frequent and severe flood events that states like West Virginia are seeing mean that nobody is prepared to take flooding on properly.

State officials say they’re working on necessary updates to the 2004 plan, to account for modern technology. State Resiliency Office Director Robert Martin said one example is stream gauges: Today’s technology can last longer than those from twenty years ago and run on solar energy. Martin told legislators earlier this year that some of the old plan is obsolete and he has spent most of his time in the office since 2020 reviewing it.

The Resiliency Office, Pew and others held a symposium in May to talk about some of those necessary updates.

Sen. Chandler Swope, R-Mercer, co-chairman of the Joint Flooding Committee, said that symposium was a critical turning point. According to a blog post from Pew, the final day of the two-day event included reviewing the 2004 plan and deciding what elements should make it into an updated version: the same thing Martin says he’s been doing for the last two years.

Even after all that work: “It’s a really fuzzy assignment,” Swope said when asked about the concrete steps the committee plans to take to make the plan a reality post-symposium. He said in the past funding has been an issue, though he said he’s arguing the Legislature should change its definition of “infrastructure” to include flood mitigation technology, so they can take advantage of federal funding. Then there’s also the challenge of working across so many different state and federal agencies.

“I have no idea: It could be several years, I’d be surprised if it doesn’t take several years before you have a refined and completed plan,” Swope said.

“While the Legislature can take some actions related to this, we are not the state’s panacea,” he said. Hanna noted that the Department of Environmental Protection has a cabinet secretary who is part of Gov. Jim Justice’s administration, which will ultimately be in charge of implementing mitigation recommendations.

In the meantime, as state officials debate what needs to change and who is responsible, more floods have devastated communities across the state. McDowell, Braxton, and Mingo counties, and most recently Kanawha, Greenbrier, and Fayette counties, are among the places overwhelmed with damage in the past couple of months. Residents were trapped, bridges were washed out, and property was swept away.

Even if they didn’t run on solar, stream gauges might have been able to help.

Across the border in Kentucky, state officials also haven’t made much progress on mitigation, but for an entirely different reason. Kentucky delegates disaster mitigation planning to municipalities, which in theory allows communities to tailor their plans to their specific needs. In practice, most municipalities in turn delegate disaster planning to regional Area Development Districts.

While West Virginia continues to study what it already studied on mitigation, some best practice insights in Kentucky don’t get through to decision-makers at all.

Bill Haneberg, state geologist and director of the Kentucky Geological Survey, said the state is lacking any kind of coordinated effort.

“There are people in state government in our Division of Water, for example, who do work on flooding, but there’s no really highly concentrated intense statewide effort. And that is something that’s missing,” Haneberg said.

And without that statewide approach, many local officials say they’re in the dark about what the regional districts say needs to be done to prevent future flooding.

“This is just the truth in Appalachia right here…we have never followed the rules in Appalachia,” said Letcher County Surveyor Richard Hall. He’s been in local government for 30 years and ensures structures built within the floodplain comply with local codes in his current role. But he had no knowledge of the county’s flood mitigation plan. Neither did the county’s flood coordinator nor the 911 director.

Calls to dozens of emergency management officials for cities and counties in eastern Kentucky hit by the most recent flood revealed that most did not know what their local flood mitigation plan was, or that their Area Development District was the entity that had made it.

Michelle Allen, executive director of the Kentucky River Area Development District, said that once the plan is created, the district communicates regularly with local officials about progress and implementation. She also noted that the day before the flood devastated eastern Kentucky, the district had hired a regional disaster coordinator to in part assist municipalities with follow-up.

But ultimately, the municipalities themselves are responsible for implementing any flood mitigation efforts: a process that’s more difficult if they don’t know that a plan exists.

Nearly five years after the Kentucky River Area Development District made its five-year plan recommending two action items for the town of Fleming-Neon, officials hadn’t made any progress on one of them: moving City Hall out of the flood plain. Mayor Susan Polis said she didn’t recall it being something they planned to do. She and others noted, however, that the most recent flood was so massive that there was likely little that mitigation could have done to prevent the damage.

And now, in both Kentucky and West Virginia, officials have found themselves in an endless cycle of emergency response that takes priority over long-term planning. In West Virginia, the Legislature’s Joint Flood Committee will be spending their next meeting addressing the state’s most recent floods.

In response to a question about whether the committee would compel agencies to testify about a timetable for plan implementation, Delegate Hanna said that wasn’t imminent.

“Figuring out what the state can do to aid and assist those affected is the top priority now,” Hanna said.

And in Fleming-Neon, the mayor  says they’re taking it one day at a time since the flood swallowed nearly every building in her town.

“I haven’t had time to think about nothing more than taking care of my people getting water into their homes and that’s what we’ve done for — how many days? Today’s number 25, 24,” Polis said in August.