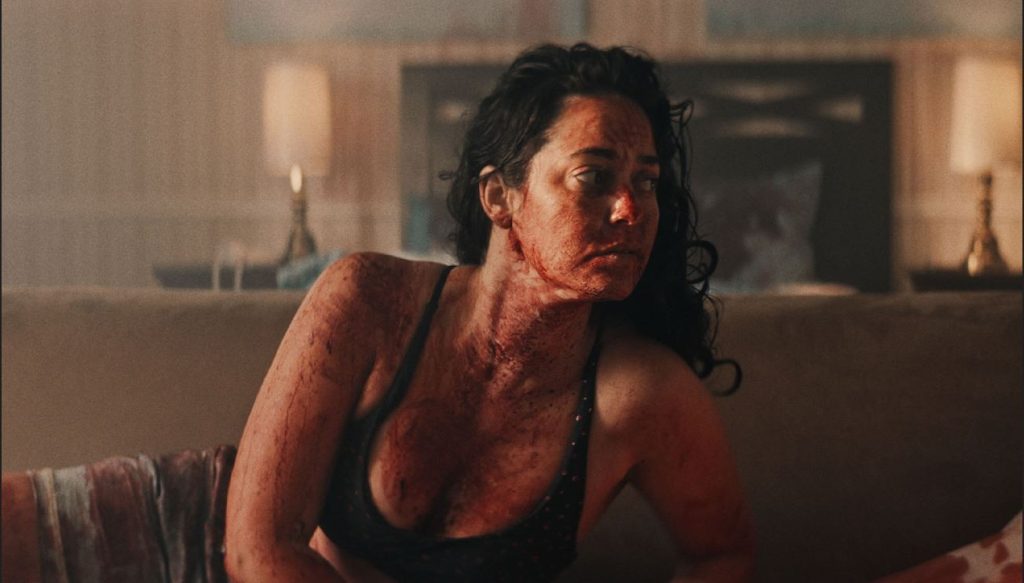 In "Do Not Disturb," Chloe discovers what it's like to spend her honeymoon tripping on bad hallucinogenics. Spoiler alert: It gives her an appetite for exotic meat.

Let’s face it. It’s been a shit summer for truly satisfying movies.

But you would be hard-pressed to name five theatrical releases that truly earned your appreciation and respect, much less made you feel something, emotionally or cathartically, whether it be thrills, chills, or rage.

The good news is that some of the best films being made and released today aren’t coming from Hollywood studios. They’re smaller productions, independent projects, and labors of love that are drawing rave reviews from major festivals around the world.

Here are six upcoming and new release motion pictures, including three standouts from the just-concluded 2022 Popcorn Frights Film Festival, which continues to grow beyond the borders of Florida to attract a global audience. This year’s event, including in-person screenings in Fort Lauderdale and virtual screenings in all 50 states, drew 10,000 people.

Do you remember what it used to feel like watching a new movie by David Cronenberg? That overwhelming sense of discomfort bordering on revulsion. That flush of shame mixed with desire. That kick of dopamine throughout your system. “Do Not Disturb” is that kind of film.

It’s easily one of my favorite films of 2022 so far, and definitely one of those special movies that I will continue to recommend and/or share via viewings with people I know will love it too.

“Do Not Disturb” is the sophomore feature from John Ainslie, a name many might not recognize, and one that I had forgotten until IMDb reminded me: He co-wrote 2007’s amazing and underrated “Jack Brooks: Monster Slayer” before retreating into relative obscurity for almost a decade.

“Do Not Disturb” is the story of Chloe (Kimberly Laferriere) and Jack (Rogan Christopher) who fly to Miami for their honeymoon. Chloe knows she is in a lousy relationship, but she keeps trying, hoping that deep down Jack actually wants to start a family with her.

Spoiler alert. He doesn’t. All Jack wants to do is party. And cheat on Chloe. I don’t know that I can think of another character in a movie that I despised as much as I instantly hated Jack. As fate would have it, Jack and Chloe end up on a beach next to a man who was mostly buried in the sand who revives long enough to hand over a huge bag of peyote to Jack along with a warning just before walking into the ocean.

For Jack, the drugs represent a gateway to a headspace where Chloe might finally stop talking about grown-up shit. He doesn’t think once about the fact that the last person who ingested these drugs intentionally walked themselves into a watery grave. And he’s such a shit human, and such a deplorable life partner, that he gaslights Chloe into eating more with him than any two people should consume in one sitting.

And from there, “Do Not Disturb” takes off down rabbit holes that I can promise you may not be mentally prepared to explore, including violence, violent sex and cannibalism.

The more fucked up they get, the more Chloe realizes that in order to survive this never-ending psychedelic trip of carnal depravity, she just might need to eat the cancer that is poisoning her life and literally consume Jack in order to finally be free.

For every independent horror movie in the past 10 years that has billed itself as an homage to and/or rebirth of the 1980s slasher phase, and then sucked royally, it brings me great satisfaction to announce that “Final Summer” is the real deal when it comes to ah ah ah, ch ch ch, kill kill kill cinema.

What’s even more exciting is that it’s the first film written and directed by John Isberg, who I predict should have a long and illustrious career if he keeps making movies as good as this one. “Final Summer” starts off establishing its location, Camp Silverlake, and its urban legend, a vengeful employee stalking counselors with an axe, and then pivots to the early 1990s on the eve of Camp Silverlake shuttering for good.

The film makes numerous nods to fans throughout, whether it’s casting Thom Mathews (“Return of the Living Dead”) as the local sheriff or displaying a giant oil painting of Tom Atkins (“Halloween III: Season of the Witch”) as the patriarch of the family that owns the camp property. (For some reason, Atkins doesn’t appear in the film, although I found lots of stories from 2021 saying he had been cast.)

Even more refreshing, the counselors look and act like real people.

The feather in its cap, though, is Isberg’s script, which imagines what it might be like for a group of young adults to be unwittingly offered up for sacrifice to appease an evil that permeates the land.

Imagine “The Purge” as a slasher film whereby a bunch of people are stuck in an environment with a killer, no consequences and no one to save themselves but themselves. Oh, and only a select few know what’s going on. The rest are oblivious as hell.

Survival horror can be a mixed bag, but it’s clear that the subgenre has moved far beyond Ned Beatty being made to squeal in the great outdoors. Recent standout efforts like “Body at Brighton Rock” show you don’t even need what’s happening onscreen to be real in order to captivating.

To that end, “Distress Signals” starts off rather conventionally. Caroline (co-writer/co-director Christine Nyland) has fallen into a ravine and dislocated her shoulder. Separated from her group, she can’t reach anyone by phone or walkie-talkie. So, she tries to walk to safety. For about 45 minutes. Caroline walks alone without incident for so long that I wrote, something needs to happen, in my notes.

And then something does happen. “Distress Signals” reveals itself to be something more than initially believed by focusing not on Caroline’s struggle to survive, but her rediscovery of the desire to live.

“Do Not Disturb,” “Final Summer” and “Distress Signals” all had their world premiere screenings at Popcorn Frights. Additional release information is not yet available for any of the titles.

In my notes, I called “The Breach” the best pound for pound feature, regardless of genre, that I had seen in a long time. I’ll defend that hill.

Director Rodrigo Gudiño and screenwriters Ian Weir and Craig Davidson deserve all the kudos. Not only do they get to nerd out with quantum physics and particle colliders, but they also don’t forget to pack some mutant wasps and a love for body horror in this fast-paced, well-written inter-dimensional standout.

“The Breach” calls back to sci-fi/horror-genre classics both old (“John Carpenter’s The Thing”) and new (“The Void”) by focusing on the basics—story, script, casting—which may not seem like a lot, but it’s actually super refreshing and much appreciated.

What sets this one apart though is its attention to detail. The set design is fantastic, like “whoa” good. The practical effects are extra gooey and look great. The cast is superb, particularly Allan Hawco as the local police chief who just wants to move to a big city but still longs for the girl who got away. And the script is loaded with some true zingers, like this standout line: “You thought your human penis was going to save the universe?”

Also making its world premiere at Fantasia, “Cult Hero” is a wholly different kind of movie from “The Breach,” in that it’s steeped in irreverence and built on a healthy stew of slapstick, satire, violence and blood.

Dale Domazar (Ry Barrett) is a social media personality, whose contribution to society’s dumbing down is “Cult Buster,” a mixture of found-footage and guerilla gotcha journalism, which shows Domazar infiltrating suspicious groups and then exposing them before supposedly deprogramming the innocent people lured into a lie.

The problem is Dale sucks at his job, so much so that he inadvertently convinces the disciples of the latest cult he’s busting to literally drink the Kool-Aid, thereby resulting in a mass suicide, on camera.

Five years later, Dale gets his shot at redemption when a small-town Realtor believes her husband has been brainwashed by a doomsday cult called The Ascension. “Cult Hero” is silly and fun. It succeeds because Barrett and his co-star Liv Collins, who plays the helmet-haired real estate agent, give their all to every moment, and never pass up an opportunity to play every situation as broadly as possible.

Both “Cult Hero” and “The Breach” recently had their world premiere screenings in Montreal at Fantasia International Film Festival and should be available to stream soon.

“The Retaliators” is a fantastically bleak, fuel-injected meditation on faith and revenge that follows a small-town pastor (Michael Lombardi) as he descends into a literal hellscape with a rogue homicide detective in order to confront his daughter’s killer.

Along the way, Bishop (Lombardi) and Det. Jed (Marc Menchaca) reminisce about the finer things in life, such as having to live with the knowledge that terrible degenerates avoid proper punishment while good, innocent folks die horrible deaths.

Jed actually has a solution that’s ripped straight out of an Eli Roth torture-porn, and which co-directors Samuel Gonzalez Jr., and Bridget Smith have no qualms about showing in grand, grotesque detail.

This release also is notable for a cast that includes a slew of hard rock musicians like Ivan Moody of Five Finger Dick Punch (sorry, not sorry) and Jacoby Shaddix of Papa Roach. Both bands also appear on the original soundtrack along with a host of other acts.