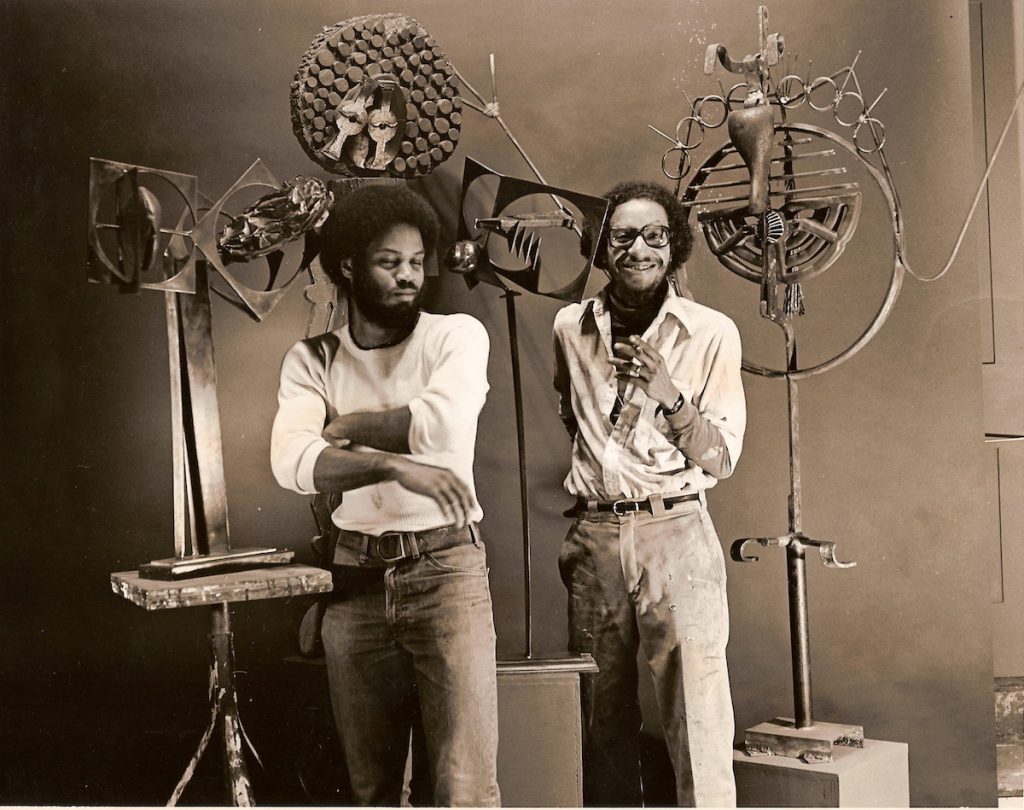 This story was made possible by grant funds from the Great Meadows Foundation.

The National Gallery of Art’s Coordinator Of Academic Programs And Publications, Sarah Battle, commenced with an oral history project this spring that will be preserved at the University of Louisville. Her project, “Painting a Legacy: the Black Artistic Community in Louisville, 1950s-1970s,” was funded by the Kentucky Historical Society through a grant in the amount of $4,435, and the Center for Advanced Study and Visual Arts at the National Gallery gave her the sabbatical fellowship, which included time off and a stipend.

Battle, who works in the education division at the Washington, D.C., gallery, also researches artist Kenneth Victor Young. Young has typically been viewed through the lens of the Washington Color School and was a resident of Washington, D.C., for much of his adult life. Battle followed her curiosity to his hometown of Louisville to uncover the links between Young’s work and the city’s mid-century Black artistic community.

Louisville should be understood as a crucible yielding notable and exemplary work by Black artists, but historically, their contributions were largely ignored by many of the powerful leaders in the local art scene. Even today’s privileged leaders, resting on a claim that “all are welcome,” do not actively seek out and spotlight the work of Black artists. Ending segregation in the art world requires intention, and Battle’s dedicated scholarship emphasizing the work of Black artists who spent significant years in Derby City is much needed as part of an overall shift for which the city yearns.

As she wrote in a member’s report, “Young’s childhood in Louisville, Kentucky; his formative years as a painter; and his lifelong relationship with the Black art scene in Louisville have not been formally acknowledged in scholarship. This omission of significant experiences and artists from Young’s narrative has consequently yielded an incomplete picture of his legacy in American art.”

Falling In Love With Louisville

This community is compelling for Battle, and she began conversing with artists in Louisville in September 2021. She moved here in February 2022 and stayed until May.

“The really exciting thing about an oral history project is you’re hearing directly from the artists,” said Battle. “I spent the first two months just getting to know Louisville,” said Battle. “I had never been there. I am very aware that I’m a young white woman interviewing largely older artists of color, so I wanted to make sure there was a lot of trust before I started to do the oral history project.”

She also heard leaders in the Louisville art fi eld, like Ken Clay, a persistent, lifelong community organizer in the arts who, in the 1960s, opened the Corner of Jazz, the first African American culture shop in Louisville, and Roberta Williams, former director of the Junior Art Gallery. Painter Carol Tobe also worked at the Junior Art Gallery, painter, and was a fellow University of Louisville student with Ken Young, Robert Douglas and Sam Gilliam. Joyce Brown Tyson — a childhood friend of many of the artists affiliated with the two main Black art collectives — is in the mix. Charlotte Hildebrand shared her memories of being a teen taking classes at Louisville Art Workshop.

In total, 18 people contributed to the project, which, while not a complete picture, offers a strong framework of the major stakeholders informing the Black art scene at that time. The project will be transcribed and then made accessible on the University of Louisville’s oral history website, so people can read it and listen to it.

The project bred obsession, fueling Battle’s desire to uncover as much as she could along the way and ensuring that Louisville will be her second home for some time.

“It doesn’t help that I actually really love Louisville, too,” she said. She’s kidding. Her love for Louisville helped a lot, and her obsession with the project was a healthy one.

This oral history project is not yet available for listening or viewing, but the good news is that it will be referenced during a new addition to the tourist-magnet St. James Court Art Show — a learning program organized by Battle herself. It includes three facets.

On Friday, Sept. 30, at 4 p.m., stationed in the Old Louisville Visitor Center, Robert Douglas, William M. Duffy and Ed Hamilton will speak during a moderated discussion on the importance of Louisville’s mid-century Black artistic community. The conversation will be moderated by Fari Nzinga of the Speed Art Museum.

At 6 p.m. that same day, there will be an Artist Panel Reception at the historically significant jazz club Joe’s Palm Room.

The following day, Saturday, Oct.1, at 1 p.m., also at the Old Louisville Visitor Center, there will be an Artist Conversation: “Women Cultivating Louisville’s Black Artist Community.” Sandra Charles, Tomisha Lovely Allen and Ton’nea Green will discuss their artistic influences, the importance of art and activism and the ways in which they continue to cultivate the Black art community in Louisville. Ramona Dallum will moderate.

This is especially meaningful to Battle because, to her knowledge, “It will be the first time this art show is doing programming in this kind of way, doing public programs in the Old Louisville Visitor Center.”

Flashback to 1957, the year of the first St.James Court Art Show.

“The show was actually conceived as a way of raising money to repair the fountain on St. James Court by Malcolm Bird and Ethel DuPont, over a cup of coffee on the porch of Ethel’s house, which is still on St. James Court,” said the show’s executive director, Howard Rosenberg. “If there had been more bakers on St. James Court, it may have been a bake sale.”

The show was pulled together quickly. All the art was hung on clotheslines. This detail connects the dots between the St. James Court Art Show and the artists being recognized in Battle’s learning program.

“One of the important art collectives for the Black artistic community is called the Gallery Enterprises. They started to do open air art shows, ‘clothesline art shows,’ as Professor Douglas would say, right around the time that the first St. James Court Art Show happened. The collective’s art shows were really important because there were no spaces for African-American artists to exhibit,” Battle said.

Representation is still a problem in Louisville, and there’s a lot of work to be done.

Last year, artist Brianna Harlan conducted an Instagram survey to assess public knowledge of the appearance of Black art at the city’s most known and established galleries; the public’s impression of whether a diverse cross-section of the community shows up for art openings; and the public’s opinion on whether the critical content of the work displayed at art events is designed to make transformative connections. A Google survey covering similar territory followed, and Louisville essentially earned an F for its failure to desegregate the art world. You can read the findings in the Louisville People ArtReport.