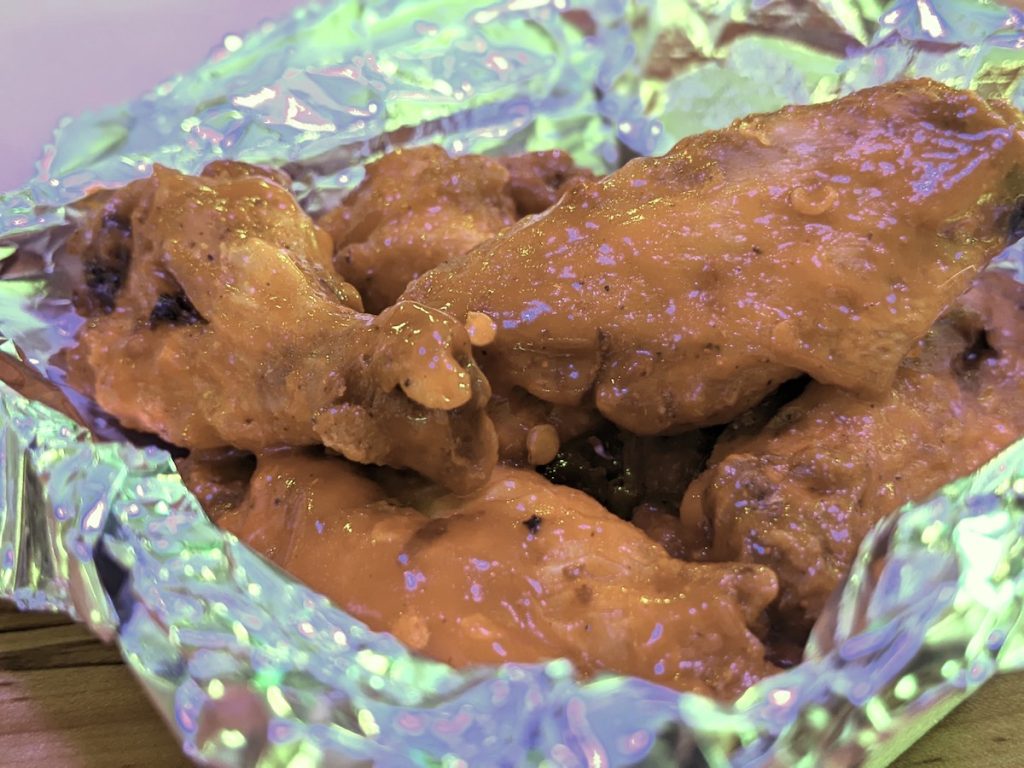 Virtue Bar & Lounge opened on Oak Street nearly five years ago and remains a big attraction as a nightclub and hookah lounge. But what might go unnoticed is the food — Virtue’s owners in recent weeks opened a second location in the Clifton neighborhood, and lunch will be a focal point of the new spot.

The fare? Southern favorites like wings and fried seafood.

I hit the new Virtue location on lower Brownsboro, which until recently was home to Trifecta, specifically to try out the wings, and ended up going back the next day. For those who had patronized Trifecta, the interior of the place has been transformed into a more open space with an orange and black color scheme. A lounge with several couches sits on one side of the room, a few tables offer dining space, and a long reclaimed-wood bar fills the back of the room. Up front, there’s plenty of dance floor.

But the dancing would come later (well, not for me). I perused the menu and was hit by the many sauces and dry rubs Virtue offers for its wings: barbecue, hot barbecue, Buffalo, lemon pepper, lemon pepper Buffalo, Grippo’s — you get the idea. There’s also Accident (a blend of lemon pepper and Grippo’s, literally created by accident) and Henny, with a Hennessy Cognac-based sauce. Because I like it hot, I chose the 911 version.

She was right, though. I got an order of six, and the aroma of the fiery red-orange wings immediately tickled my nostrils, preparing me for what was to come. I examined the wing sauce and noticed red pepper flakes and even pepper seeds, along with black pepper.

I dove in, and yes, they were hot, but mostly they were popping with flavor. And the best part was that, while they were only medium-sized wings, they were cooked crispy, plenty juicy inside and obviously fresh, quality chicken. Thirty minutes later, my lips were still burning.

At one point, the cook came out of the kitchen glanced at me as she walked by, saying, “I can’t believe you’re eating those.”

But they were quite good. In short, I know where I’ll be getting my game-day wings going forward.

I asked Nisha her favorite menu item, and she talked up the turkey legs, which come in various ways, whether by itself like you’re at a Renaissance faire or as a meal, paired with greens and macaroni and cheese. “The meat falls off the bone,” she said.

For my part, I noticed the salmon bites. I decided to return to try one or the other, and when I went back, I struck up a conversation with one of the owners, Toney. I told him I was keen to try the salmon bites, and he said, “You have to try the catfish.”

Decisions, decisions. Toney hooked me up not only with the salmon bites, but a couple bites of other items as well. Long story short, Toney was on the money. The fried catfish nuggets were prepared classic Southern style, with crispy cornmeal batter laced with plenty of salt and pepper. They were fried perfectly, with the fish inside flaky, fluffy and delicious. It was like Sundays at my grandma’s house.

The house sauce, sort of a Cajun-style aioli, adds a tangy aside, but honestly, that fish needed no help. I couldn’t get enough. And one of the curveballs that Virtue Bar throws at its diners is that you can get many of the fried dishes with Grippo’s seasoning, lemon pepper seasoning and others. I got a couple bites of the Grippo’s catfish, and, well, let’s just say it was a unique experience. I prefer it straight, but for those who love the Grippo’s fries found at places like Hammerheads, this is worth a try. (Note: there’s also a “giant catfish sandwich” on the menu.)

The salmon bites also were tasty — sort of a meatier version of a salmon croquette, in sphere form. It actually seemed more attuned to the house sauce than the catfish, at least for my palate. And if you like fried mozzarella sticks, the version at Virtue have a little spice to the breading. Quite interesting.

Up and down the menu, it’s finger foods, like fried shrimp, eggrolls, hush puppies (made with kernels of corn), a few sandwiches and of course the turkey legs, which may be on tap for my next visit. (You can even get the turkey legs with Grippo’s seasoning — it’s called “The PawPaw.”) There also are a couple of salads on the menu as well as other vegetarian options.

Toney said, in addition to lunch and dinner hours Wednesday through Sunday, the restaurant will open at 5 p.m. on Tuesdays and serve tacos. On Sundays, NFL will be shown on the many flatscreen TVs. Of course, at night it’s party time. But if you’re looking for a tasty meal, you can stop in all day — and there’s even a drive-through window for convenience.