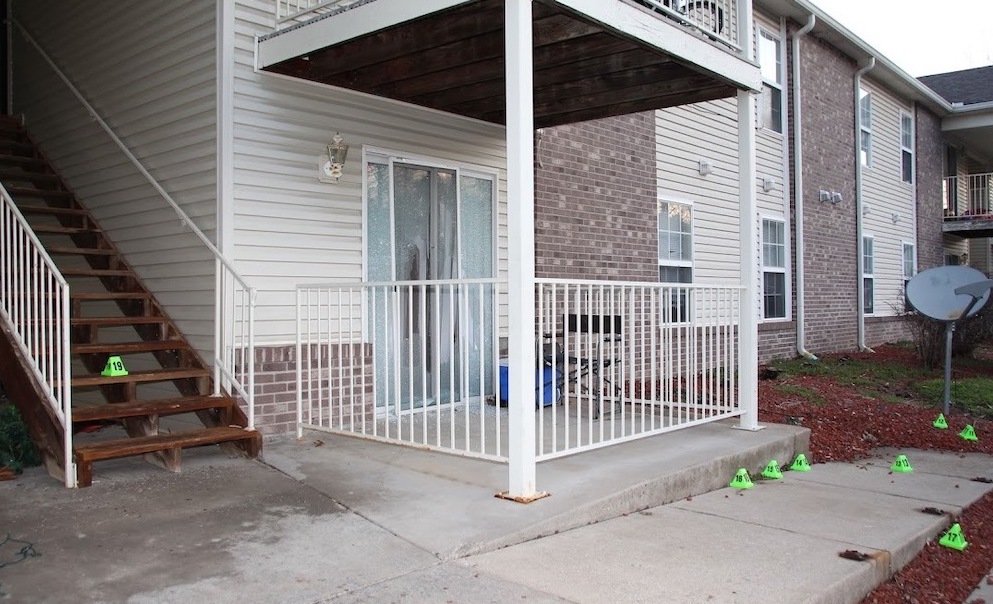 When Donavis Duncan heard what sounded to him like 20 to 25 gunshots ring out while he was at home in his South End apartment in the middle of the night on March 13, 2020, he grabbed his radio, put on his bullet-resistant vest and ran a little over 100 yards to where officers were gathered outside of Breonna Taylor’s home.

Duncan, an officer with the Louisville Metro Police Department, was off-duty when fellow officers served a warrant on Taylor’s apartment, which resulted in the police killing of the 26-year-old ER tech.

The story of what he saw and heard that night was one he would recount when journalists found out he was a neighbor of Taylor’s and asked him about it.

In the FX documentary series “The New York Times Presents,” on the ABC news show “20/20” and on Louisville’s WDRB, Duncan appeared in civilian clothing as he talked about what he observed the night Taylor was killed: how he heard over his police radio that an officer had been shot. How, when he arrived on scene, he saw officers trying to call Taylor’s boyfriend, Kenneth Walker, out of the apartment. How he briefly spoke with Taylor’s mother when she showed up asking where her daughter was.

And speaking with Courier Journal columnist Joseph Gerth, Duncan, who is Black, talked about systemic racism present within the police department — how some white officers who patrolled predominantly Black neighborhoods did so with preconceived notions.

With LMPD taciturn as it faced widespread anger over the killing of Taylor, Duncan’s appearances in the media offered a rare window into the complex, nuanced realities of the police force during the tumultuous summer of 2020.

But nearly two years after he gave those interviews, Louisville Metro Police Department Chief Erika Shields suspended Duncan for two days without pay for speaking to the press about the Taylor case.

According to documents from an internal investigation obtained by LEO Weekly through Kentucky’s open records law, Shields determined in May of this year that Duncan had violated the department’s policies on release of information, obedience to rules and regulations, responding to media inquiries and confidential police business by speaking to journalists about the Breonna Taylor case. She mandated that he serve his suspension in late June.

“It’s disappointing that Officer Duncan was disciplined for exercising his Constitutional right,” Gerth, the Courier Journal columnist, said in an email to LEO. “Punishing an officer for this has a chilling effect on others who may otherwise come forward about how the department is run.”

Peter Kraska, a criminal justice professor at Eastern Kentucky University, said all major police departments have media policies, but that they are not always enforced equally.

“There’s no doubt that all police departments are going to differentially enforce those policies depending on the circumstances. Most of the time because they just don’t care,” he said. “But if it’s ever going to bring a police department in a bad light, and some things are said that might raise some questions about what’s going on in the department or what’s they’ve done, those are going to be the ones that get attention.”

Contacted by LEO Weekly, LMPD did not provide a comment or respond to questions about the case.

According to LMPD’s standard operating procedures, media inquiries must be cleared through an officer’s commanding officer, with the commanding officer receiving final approval from LMPD’s Media and Public Relations Office. Additionally, officers are to refer requests for “general information about the department” to the media office as well.

After Duncan’s commanding officer, 6th Division Commander Maj. Corey Robinson, saw Duncan on WDRB’s 10 p.m. newscast on Sept. 9, 2020, he started making inquiries as to whether Duncan had requested permission. Contacting Duncan the next day on Sept. 10, he said he told the officer he would not infringe on his First Amendment rights, but read him LMPD’s media policy and told him he must obtain approval from the Media and Public Relations Office in the future. Duncan told Robinson he was unaware of the policy and had responded to media inquiries without seeking approval once journalists found out he was a neighbor of Taylor’s. He’d later tell investigators that when he was first contacted by journalists about interviews, he sought the advice of senior officers he knew, who told him it was fine as long as he didn’t wear his uniform or speak on behalf of the department.

By the point Robinson confronted him about the media policy, Duncan had given interviews to WDRB and The New York Times that both aired within the previous week.

According to a timeline created by Robinson that was included in the investigative file, Duncan called him back just over an hour after their phone call about the media policy to tell Robinson that the Courier Journal had reached out to him. Robinson then contacted Sgt. Lamont Washington, the head of LMPD’s media office at the time, who said that the Courier Journal should contact the media office.

Events after that are trickier to decipher. Duncan said that Gerth, the Courier Journal columnist, told him he would call a police press person and “get everything approved.” Washington said Gerth reached out to his supervisor, Jessie Halladay, a special advisor to the police department at the time, who told him no. Robinson, Duncan’s supervisor, said Duncan said Gerth called him back saying he’d spoken to the press office and they then proceeded with the interview; However, he also said that Halladay called him to say that no approval was given and Gerth called her after the interview was completed.

Speaking to LEO Weekly, Gerth said he did not have a firm recollection of the events two years ago; Halladay, who is no longer with the police department, declined to comment.

The investigative interviews were conducted half a year after the events in question. Neither Halladay nor Gerth were interviewed by LMPD investigators.

In Gerth’s resulting article, which came out on Sept. 12, Duncan talked about the night Taylor was killed, his concerns about shots Detective Brett Hankison fired from outside the apartment and how he and Taylor’s boyfriend, Kenneth Walker, were friends. He also talked about Breonna Taylor, George Floyd and Tamir Rice as martyrs for change, said that justice could come in the form of changes to police training and said systemic racism exists within LMPD.

“White police officers who grew up in Oldham County or Eastern Kentucky or someplace where they didn’t know many African Americans, what taught them up to that point about African American culture?… TV? Social media?” Duncan said to Gerth. “Their minds and hearts have been shaped and formed based on what they have seen up to that point. Then we give them a badge and a gun and send them to the West End.”

The article was titled “LMPD officer says systemic racism exists and Breonna Taylor’s death is a chance to fix it.”

Two days after the article was published, Robinson printed off 70 copies of LMPD’s media and public relation policy and made sure every officer in his division was read the policy during roll call.

“You were made to listen to that policy and — and acknowledge that you understood it and signed off on it,” he told investigators.

Given that he had previously informed Duncan of LMPD’s media policy after he discovered other interviews, Robinson told investigators that he felt the officer had “blatantly” broken the policy when he spoke with Gerth.

Robinson, Duncan’s commanding officer, took exception to Duncan talking about “sensitive information” regarding gunfire that night and how officers called for Walker to come out of the apartment after the shooting.

“It literally compromised everyone’s safety, um, from that information being, uh, essentially leaked out, uh, intentionally,” he said, according to a transcript of an interview with investigators.

The commander of LMPD’s Professional Standards Unit, which conducts internal breach of policy investigations, also found Duncan’s statements to the media about what he saw on the scene troubling.

Lt. Jensen Godfrey, the PSU commander, wrote that by making “specific statements regarding the actions of officers being investigated for alleged violations of departmental rules and violations,” Duncan had violated LMPD’s policy on obedience to rules and regulation.

In explaining a confidential police business policy violation, Godfrey wrote: “It appears Officer Duncan revealed information gained through police employment to persons outside the department when he was interviewed by media outlets and provided information to them about his involvement and response to the critical incident and described actions of other officers that he observed while responding to the incident in a police capacity.”

By the point Duncan’s interviews were published, there were already videos circulating showing the aftermath of the raid as well as interviews with other neighbors living at the apartment complex. Additionally, Detective Brett Hankison had already been fired by interim chief Robert Schroeder for “wantonly and blindly” firing ten shots during the raid on Taylor’s apartment. It had also been public knowledge for months already that after the shooting stopped, police remained outside the apartment and attempted to call Walker out.

In his interviews with investigators, Duncan maintained he did not share confidential information in interviews.