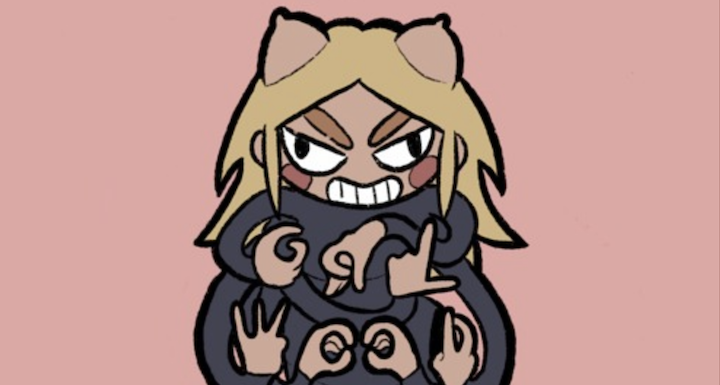 Band – Grlwood
Louisville-based scream-pop duo GRLwood has been known to write some sarcastically funny, tongue-in-cheek lyrics. This is not one of those songs. Built around a slower-paced, grungy, lo-fi , indie-pop tune, “Kid Bruises” (the first single off GRLwood’s upcoming EP Simple Candy) is a full-on heartbreaker revolving around a child abused by her mother, contemplating suicide when her grandmother dies so she doesn’t have to go alone. When vocalist/ guitarist Rej Foerster follows up the quiet refrain of “Don’t tell grandma” with an absolutely ferocious scream of “That I want to kill myself,” you don’t just hear it, you feel it. All the pent-up rage, anger and hurt all comes spilling out in one moving, emotional, empowering, brilliant moment. Regarding the lyrics, Rej Foerster says, “I want this song to help people feel not alone when they are going through it. And that’s a really isolating feeling that can drive some people really far. I hope by giving that desperate feeling some vocabulary, it can help someone express what they are feeling in a creative external way instead of letting it eat them from the inside out.” Easily one of GRLwood’s most powerful performances yet.

Band – Hot Brown Smackdown
Louisville newgrass fusion sextet Hot Brown Smackdown is back with a sneakpeak of their next, yet-to-be-titled sophomore album to be released later this year. Not only is “Empire” the fi rst studio track to be released since last year’s self-titled album, it is also the fi rst song to feature the contributions of violinist/songwriter Ellie Ruth Miller, who offi cially joined the band late last year. Given the number of shows this band does locally, I’m assuming pretty much everyone is at least vaguely familiar with them at this point. For the few who aren’t, Hot Brown Smackdown’s songs typically lie somewhere between progressive bluegrass, rock and jazz. “Empire,” however, leans a bit harder into their jazz infl uences while still seamlessly blending in their jam band, rock and bluegrass infl uences. Imagine a combination of Billy Strings, Dave Matthews Band, Pink Floyd, Grateful Dead and Miles Davis all in one song. That will get you somewhere close to the sound here. This is a smooth, sweet, easygoing track that is as perfect for kicking back and relaxing as it is for getting up and dancing.

Band – In Utero
It’s odd to be old enough to see a revival of a music style that doesn’t really seem like it happened all that long ago. However, it’s been 30 years, (god that is painful to say), since grunge ruled the airwaves. Now Louisville’s In Utero is giving it a kick in the ass with their debut full-length spiral. Started as a passion project by vocalist and guitarist Davin Jones (who would also serve as songwriter, engineer and producer on this album), In Utero has now become a two-piece after taking on drummer Dom Zanotti. The Nirvana influence is obvious here; however, it’s the not-so-subtle touches of bands like Soundgarden, Sonic Youth, Mudhoney and Babes in Toyland that sets In Utero apart. Jones’ somewhat raspy, yet strong vocals occasionally go into punk-rock-style shrieking, with lyrics ranging from, in Jones’ words, “a place of deep introspection and other times as nonsense,” backed by the melodious crunch of the guitar and thunderous drums. The raw, rough-around-the-edges production helps give an authentic impression here of the unrefined nature of what originally made grunge great.

Band – Nick Teale
He’s a little bit country, and he’s a little bit rock and roll… and folk, jazz, bluegrass, pop, Americana, contemporary, Middle Eastern and Latin. Pretty much a little bit of everything. Singer/songwriter/multi-instrumentalist Nick Teale absolutely shines here on his debut full-length album, Still In Limbo, the follow-up to last year’s EP, Love Was. Eclectic mix is an understatement, but in the best possible way. Ten acoustic guitar-driven, genre-spanning tracks dealing with themes of introspection, love, insecurity, mercy, justice and power structures, all centered around Nick’s strong, full vocals that “range from Johnny Cash lows to Steve Perry highs,” as Teale so perfectly puts it. Each song gives the listener a unique experience different from the previous, yet all somehow blending together beautifully. Whether it’s the jazzy, ‘70s funk rock feel of “Don’t Let ‘Em Take The Temple,” the adult contemporary “Whatever It Takes,” the bluegrass-y, folky, Americana “Rectangles,” the poppy, jazzy, Latin with an R&B fl are of “Limbo,” the Southern rock-tinged “Water Ski” or the completely-out-of-left-fi eld Arabic-influenced hip-hop track “Solomon’s Verse,” there is a little something here for everyone.