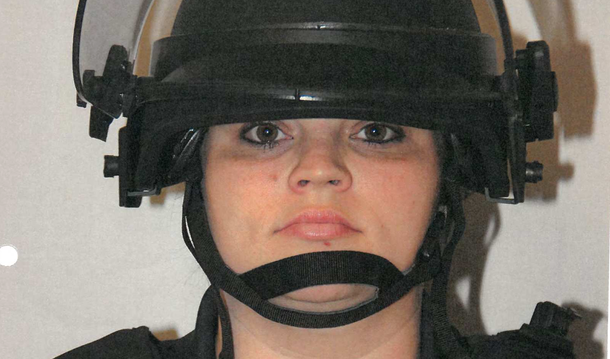 Former Louisville police officer Katie Crews could face a maximum of one year in prison instead of ten for firing pepper balls in the moments before West End BBQ chef David McAtee was killed, a “superseding information” document filed by federal prosecutors on Tuesday said.

Her attorney, Steve Schroering, told LEO Weekly he was not able to comment on the case.

Crews was federally charged in March with using unreasonable force when she fired her pepper ball gun at an individual identified as “M.M.” on June 1, 2020 as Louisville Metro Police Department officers and Kentucky National Guardsmen were dispatched to the intersection of 26th and Broadway to disperse people violating a 9 p.m. curfew that had been put in place in response to protests over the police killing of Breonna Taylor.

Prosecutors say the individual Crews fired at was on private property and not posing any threat to Crews.

After people fled into McAtee’s kitchen fleeing pepper balls, the chef stepped into his doorway and fired two shots, prompting police and National Guardsmen to return fire. It was later determined that a National Guardsman’s bullet killed McAtee.

Members of David McAtee’s family have said he would never knowingly fire at police.

His restaurant was located more than two miles from the downtown square that served as the epicenter of the protests. There were no protests at 26th and Broadway, but the intersection is a popular late-night hangout.

Crews would later tell investigators that she fired her pepper ball gun that night not because she encountered a disorderly or aggressive crowd, but because people were not compliant with her orders to disperse.

In February of this year, Crews was fired from LMPD, with Chief Erika Shields writing that the officer violated the department’s de-escalation policy by failing “to provide individuals the opportunity to respond to your commands to disperse” before opening fire with her pepper ball gun. Shields wrote that Crews also violated the department’s policies on use of chemical agents, body-worn cameras, social media and conduct unbecoming. While LMPD fired Crews, the department did not publicly acknowledge so until federal charges were brought against her.

Crews is one of seven LMPD officers federally charged with criminal offenses so far this year.